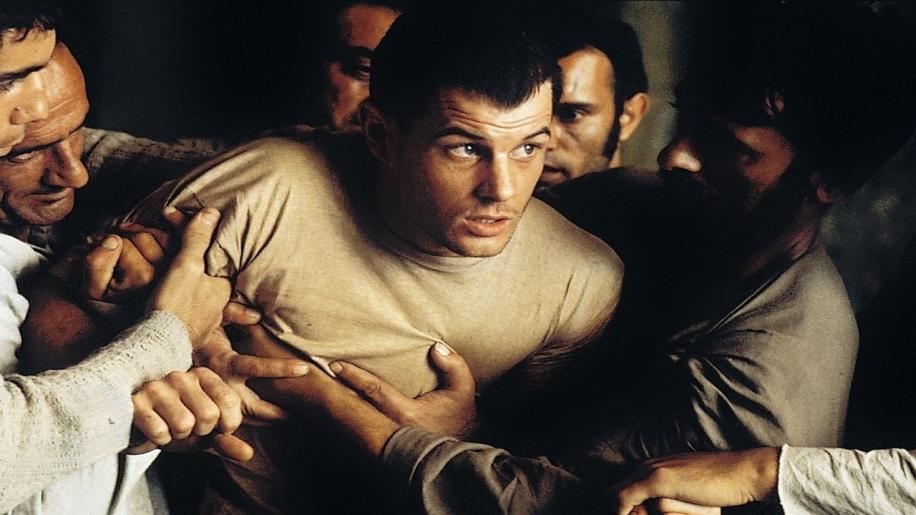 In 1970 one William Hayes, student, tried to smuggle a large quantity of hashish out of Turkey. He was caught, arrested and ultimately jailed for his crimes and sentenced to 4 years, later increased to a minimum term of 30 years. William Hayes decided there and then to try to escape from his prison Hell. After finally escaping he wrote his story and named it “Midnight Express”, the slang term for a jail break.

In 1978 producer David Puttnam and director Alan Parker, took the story and transferred Hayes' writing to the big screen in a film of the same name. Some items were changed for dramatic purpose but in the end Parker released a film which made Turkish drug smugglers think twice about strapping kilos of hashish to their bodies.

We begin with Billy Hayes (Brad Davis) packing away his ill gotten goods and travelling to the airport. Prior to boarding though the passengers are subjected to a brief search. This search reveals the hash on Hayes' body. He is taken to the local police station, from there to appear in court and then to the prison walls which will hold him for the next four years. Shortly before those four years expire, with only 53 days remaining he is taken back to court to hear that his sentence has been extended to a minimum of 30 years. His crime now one of smuggling rather than just possession.

Back inside the prison gates Billy realises that he can no longer remain here and with the help of two friends he tries to escape. Those attempts are foiled, his friends are subject to the guards brutality and Billy finds his mind slipping away. He has to escape now or be destined to die in what he no doubt regards as his own foreign Hell.

Throughout the years after the release of Midnight Express there has been some condemnation of the film from Billy Hayes himself, resulting in Hayes addressing a conference in Turkey (after the warrant for his re arrest had been waived) in which he apologised to the Turkish people for the film and how it had shown the Turkish people in such a negative light. Equally both Alan Parker and producer Puttnam have indicated that the initial book which they based their film on was in fact a piece of fiction itself in so far that time had taken its toll and some of the memories contained in those initial writings might have been false or exaggerated somewhat. Oliver Stone was the man responsible for taking the book and producing the screen play and who am I to say that he's incapable of exaggerating a plot line or two. So it's probably fair to say that whilst Midnight Express, the film and the book, are a retelling of one man's stay within the confines of a Turkish prison the truth is probably somewhat different than either.

What we are finally left with though is a credible film, rightfully nominated for a number of awards, a film which is not about the life behind the walls of a Turkish prison but more on the people incarcerated there and what you have to do to survive. As The Shawshank Redemption was more about friendship and hope so this film is about the friendships which Billy makes and the fact that he never gives up his will to live and to once again enjoy the freedom which he took for granted those few years ago.

There were a number of actors in the frame before Billy Davis finally took on the role of Billy Hayes. The most famous of these was Richard Gere and personally I do not think that Gere at that time in his career had the gravitas to pull off the leading part. In his later years he has starred in some good films and played the parts well enough. But for a part from 30 years ago where he was would have been required to play a darkly emotive piece whilst exploring such avenues as homosexuality and forced brutality Gere just doesn't really have it. Denis Quaid, bother of Randy who does in fact star here as Jimmy Booth, was in with a shout as well but ultimately the accolade went to Davis and when looking back at the film now it is difficult to see who else would have played the part any better. Davis would eventually contract AIDs and die prematurely at only 41 years of age. His family can be proud of the work he left though, he was nominated for a number of awards eventually winning the Golden Globe.

Awards came thick and fast for Midnight Express with a number of Academy Award nominations, including best director and best supporting actor for John Hurt. In the end though it took away two of these gongs, one for Oliver Stone's screenplay, the other going to Giorgio Moroder for best original score. Stone's screenplay has been briefly touched upon and Moroder's score is one of the better ones out there. Combining the electronic notes with a middle eastern feel he seemed to bridge both worlds portrayed in this feature. There is a section where Billy goes on the run and during this piece Moroder penned a superb piece to accompany his flight; the intense electronic chords mirroring the racing heart Hayes must have been experiencing at the time. Moroder was riding high on the hog with his recent collaboration with Donna Summers and whilst Vangelis was initially destined to provide the music for this piece, much like Davis before, it's difficult to see how this score could have been made any better. Moroder has composed other film scores, most notably Scarface and Cat People, but nothing really does come close to the body of work he produced for Midnight Express.

John Hurt received a number of nominations for his portrayal as the English junkie locked up in these prison walls. Hurt has always been a stalwart of the English stage and screen, often overlooked for some of the roles he has undertaken. He has an immense body of work under his belt from countless television appearances in the sixties and seventies before finally graduating to film in the mid to late seventies with voice parts for the likes of Lord of the Rings and Watership Down. Most will however remember him from Alien and of course The Elephant Man in 1980 and whilst he made a wonderful Winston Smith in 1984 the film itself was not everything that it could have been. Although a young man when Midnight Expressed was filmed he does in gact look aged, ragged and appropriately enough almost at deaths door. A portrayal of an addict which would not be bettered for some time.

That then leaves director Alan Parker. In comparison to other directors he has been rather choosy with the work he has put his hand to. I can say though that I do enjoy most of his work. Bugsy Mallone is an excellent little piece which still holds its charm to this day, The Wall works well enough with Gerald Scarfe's animations and Roger Waters dark mind. Angel Heart, The Commitments, Mississippi Burning, Angela's Ashes are all films which are well worth a look and all in some way different than the ones before it so Parker is indeed a versatile, credible director. That is more than apparent in Midnight Express, the direction flows well, letting the actors free reign when needed, tightening it up a little in the court, heightening the viewers emotions when Billy is trying to make a run for it. Even though our incarcerated players are surrounded by filth, degradation and their humanity is slowly being stripped away from them Parker manages to craft some brief erotic scenes as the friendship of two inmates slowly develops. A credit to the man not only for this film but for most of the films he has put his hand to.

Midnight Express is a good watch and one I'm proud to have in my collection. It's not for everyone and if you're wanting hope with cleanliness then look to The Shawshank Redemption. If however you're looking for hope in a dusty, squalid hell then look no further than this excellent release.