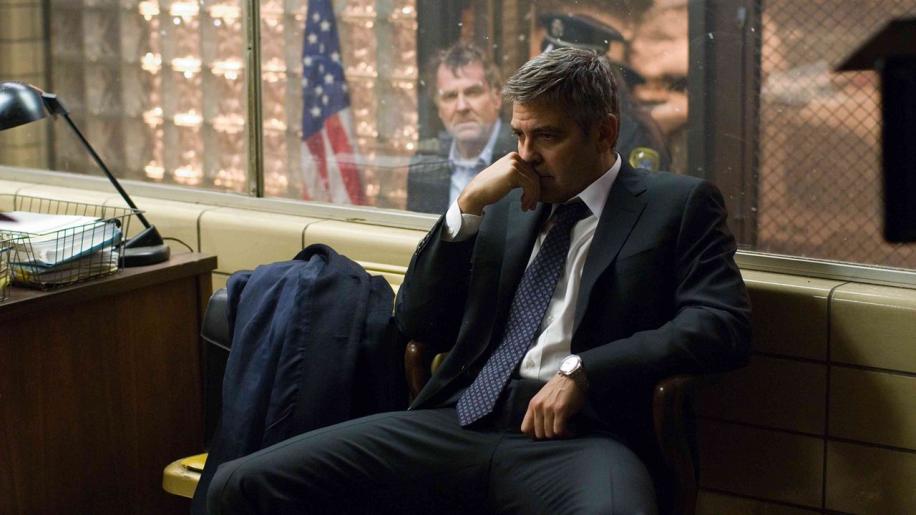 Before Starbucks took off and put a large quantity of the population on a continuous caffeine high, before MTV became the beginning for all new directors, before Hollywood became quite so keen on overwhelming its viewers into submission, before all that, decent entertaining thrillers needed none of those fast-cuts and frantic pacing that seems pre-requisite these days. If you don't have some big explosions, or guns being waved about, then you have to have lots of running, escaping and evading, or shouting and dramatic acting, and even if you have none of those, nowadays you need dialogue delivered at a hundred-plus words a minute (a la West Wing). Even the dark antihero has become something of a cliché, along with the shady suits, the threatening organised crime bosses and the wacky, disposable conspiracy theorist colleagues who turn out to be right in the end. Don't get me wrong, I quite enjoy Grisham's identikit legal thrillers, have a soft spot for Tony Scott's flashy over-stylised thrillers (like Man on Fire or Spy Game) or Michael Mann's modern-day classics (like Heat or even Miami Vice), but if Redford and Hoffman could hold the screen with words and wire-taps in All the President's Men, why couldn't we have the same thing post-2000? The biggest worry was clearly just boredom, the tedium that can result from a long, protracted, convoluted affair which clearly thinks too much of both itself and its ability to befuddle the audience. The Good Shepherd was a prime example, and Breach didn't quite work either - in my opinion - despite the fact that both adopted a more classical approach to thriller storytelling. George Clooney's own Syriana, on the other hand, did a much better job on the CIA thriller front, eschewing bombast and gloss in favour of realistic characters and realistic situations. Now Clooney is Michael Clayton, a part which nearly garnered him an Oscar. But was he worthy of even the nomination? And does the movie, written and directed by Tony Gilroy (the man behind the screenplays to all three excellent Bourne thrillers) truly manage to capture that seventies, Sydney Pollack-style approach to storytelling and visualisation, all the while retaining the viewer's interest?

Michael Clayton is a fixer, a highly paid lawyer who hasn't seen the inside of a courtroom for over a decade. He is called in to clear up the more morally dubious messes that his firm's biggest clients make, and it's a job which has left him more than a little world-weary and cynical, his own moral compass having been thrown off some time back. But when one of his closest friends, and one of the firm's most senior partners, appears to have a complete mental breakdown, he is forced to reassess his beliefs. Is he going to clean up the mess that his friend has now made? Or is there any truth in the ramblings of a madman?

Juxtaposing the way in which the central character has to deal with where he has ended up in life, with an interesting mystery/conspiracy that involves big industry and big cover-ups, writer/director Tony Gilroy has fashioned a classically refined legal thriller, which - quite unusually - delivers on both fronts - character development and plot construction. Arguably Clooney's lead role overshadows the plot itself, but the story is never less than gripping, slowly and skilfully unravelled to allow you to piece together everything that is happening in your own good time. It truly is a modern take on that classical style of storytelling that I thought we had long lost, the pacing perfect, the cuts fluid but never flashy, and the movie never relying on big impact to engage the viewer. This is all about that slow, sinking feeling, the progressive realisation of what is going on, what is at stake, and taking a journey in the shoes of Clayton himself.

“There's no play here. There's no angle. There's no champagne room. I'm not a miracle worker, I'm a janitor. And the math on this is simple. The smaller the mess, the easier it is for me to clean up.”

And in bringing the character to life, Clooney is just about perfect, on absolute top form. He's an extremely charismatic, charming actor, but he's also capable of some convincing depth, whether it be in his early years on E.R., his early movies like Three Kings and Out of Sight, or his more unusual choices, like Solaris and Syriana. Tackling increasingly daring subjects and tougher roles, it's amazing to see the person so perfect as the suave leader of the pack in the Ocean's Eleven remake also totally at home as this shady, divorced, gambling, battle-weary lawyer who has seen too much and been asked to forget too much. It's not a loud, shouty, showboating role that overtly cries out for an Oscar, which is why - in a way - it would have been nice for it to go to Clooney (although I have no doubt that Daniel Day-Lewis utterly deserved it). He simply becomes Michael Clayton, and it's all about the eye-movement, the slight look of concern that passes across his eyes, the tiny air of desperation, the carefully contemplated speech of a tired, experienced man, for whom almost nothing comes as a surprise. It's Clooney at his best.

Although this is Clooney's baby, it's only further credit to him that he still manages to shine opposite the likes of Tom Wilkinson and Tilda Swinton. Wilkinson has become such a heavyweight supporting actor, bringing some of the most enigmatic screen characters to life, like his boisterous turn in Batman Begins. I'm not discounting his lead roles - he was critically acclaimed for his work on In the Bedroom - but it's parts like this one in Michael Clayton where he gets to really chew up the scenery with speeches which you just could not imagine anybody else delivering. Tilda Swinton is also on good form - although I'm not sold on her quite deserving Best Actress, but for the fact that there was no one better on offer this year. A very capable actress, she too has chosen some pretty diverse roles, whether it be the fallen angel Gabriel in the engaging comic book adaptation Constantine, or the tragic heroine in the haunting The Deep End. Here she does well at depicting an unabashedly and desperately ambitious litigator who is getting increasingly over her head in this shady affair. We also get Sydney Pollack himself as Clayton's boss, his presence a nice nod to the fact that he is himself the man who once directed this sort of classically stylised thriller (Three Days of the Condor, and even The Firm).

“The last place you wanna' see me is in court.”

It is not just about the acting talent on offer though, however superb they might all be, it's the characters that really bring the drama to life. There are few clichés here, few stereotypes, whether it be the lead roles - the world-weary antihero, or his desperate friend - or the smaller parts like the organised crime loan-shark who comes across like a friendly bartender, or the professional hitmen, for whom this is just another 'job' to deal with in whatever way appropriate. All the characters painted ring true, and it is quite refreshing to see this in a movie these days. Add to that some superior cinematography, expert use of the broad 2.4:1 scope both on the long shots and the close facial realisations, a thoughtful, simmering scoring and some authentic clandestine legal/business wrangling, and what you basically have is a pretty perfect thriller.

Don't get me wrong, this may not be to everyone's tastes, and Michael Clayton may even actually take a couple of viewings to grow to love. It is not an in-your-face affair that will smack you into submission, it is the kind of movie that has a lot to offer if you just take the time to absorb it all. It will leave you thinking, and questioning, but still satisfied enough by the answers on offer. It's the kind of movie I want to see more of, stylish but not glossy, assured but not pretentious, and classically old-school in its contemplative, methodical plot and character evolution. I really rate George Clooney as having become a top class actor, and here Clooney simply is Michael Clayton, and Michael Clayton simply is one of the best films I've seen this year.

“I'm not arguing with you, I'm telling you how it is.”