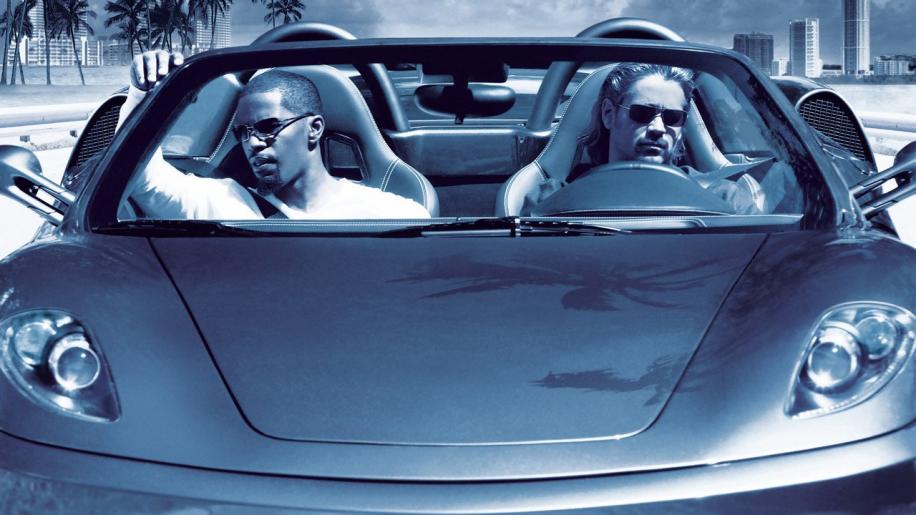 In 1996 director Michael Mann made one of the greatest cops and robbers thrillers, Heat. He had previously done the fantastic Daniel Day-Lewis piece, The Last of the Mohicans and, before that, the underrated and - in my opinion - best of the Thomas Harris / Hannibal Lector adaptations: Manhunter, starring CSI's William Petersen. But with Heat, Mann really made a mark for himself. It was, however, a practically word-for-word, scene-for-scene remake itself of one of his first movies, the low budget L.A. Takedown, but what made the later version so superior was the presence of two of cinema's greatest heavyweight actors, Robert De Niro and Al Pacino. Mann has since gone on to become one of the most reliable, skilled directors around, with powerhouse productions like Ali, The Insider and Collateral under his belt. Before he went into directing movies, however, Mann was the man behind the camera on the classic Eighties TV show Miami Vice, which boasted flares, linen suits, fast cars, fast boats and the cheesy charmer Don Johnson. Now, over twenty-five years later, Mann has revisited his brainchild to create a Big Screen adaptation. So, did he manage to work his magic with it?

“No one has ever tread before where we are now.”

James 'Sonny' Crockett and Ricardo 'Rico' Tubbs are two of the best undercover officers in the Miami-Dade Police Department's Vice Unit. There is a mole, however, within one of the many intelligence agencies, and the leak is getting undercover operatives killed. Pulled off their latest prostitution assignment, they are drafted in to go deep undercover with a West Coast drugs smuggler, with a view to not only arresting the parties involved, but also uncovering the leak within one of the departments.

Unfortunately, the mission gets dangerously complicated, as Sonny and Rico discover that their drug-dealing contact is merely a middle-man for a much larger operation run by a sinister boss, Archangel De Jesus Montoya. To make matters worse, Sonny takes an ill-advised interest in Montoya's girlfriend, Isabella. Pretty soon the undercover duo and their entire unit find their very lives under threat from an operation that could be getting perilously out of control.

Miami Vice is a solid, ultra-stylish thriller - exactly what you would expect from the director of Heat and Collateral. It does, however, suffer from comparisons with those, and other thrillers, in that it feels relatively incomplete. You see, Miami Vice successfully manages to avoid prolonged character development at the outset, showing a clearly established bond between the two leads where trust goes unspoken. It jumps straight into their missions, into what they do best, with no introduction and, as I said, this abrupt start works successfully - mainly because you gain a better feeling for the characters as the story evolves. Unfortunately, Mann has decided to do the same thing with the ending which, frankly, leaves far too many things unsolved. Perhaps he was trying to give the viewer a 'taste' of the lives of these two cop partners, but the abruptness makes you feel like this was just an episode in a whole series. And given the fact that Mann has never previously been inclined to do sequels, I would be very surprised if he planned on starting here. No, I think this is it, folks, and if it is, then it is simply not enough. If you think of the many complete story arcs within Heat, which was only marginally longer than the director's cut of Miami Vice (where the only particularly noteworthy addition is the opening powerboat race sequence), you are likely to find this movie comparatively unsatisfying.

What about the cast? Well, both Jamie Foxx and Colin Farrell are both solid in the lead roles, although Farrell's brooding, mullet-and-'tache Crockett does not convince as a ladies' man. As undercover cops, however, they excel and the understated teamwork between them is cleverly observed. In the Mood for Love's Gong Li is also worth noting, as Isabella, the chinese/cuban girlfriend of Montoya, an unusual cross-cultural character which Li pulls off convincingly. Mann's always fond of dropping in some recognisable faces and this is no exception, with Louis Theroux's brother Justin Theroux and the super-toned Elizabeth Rodriguez getting bit parts as two of the Vice Unit's other operatives, as well as the brit Ciaran Hinds (The Sum of All Fears, Munich) as Tubbs and Crockett's senior police contact.

Mann has got all the right elements in this solid thriller as well: from his ultra-stylish, picture-perfect direction (with some truly gorgeous scenery, like the Ciudad del Este waterfalls and some great camera shots, like the opening out-of-the-water boat race sequence) to a richly authentic script (plenty of cop 'lingo') and some superior performances. However, without a doubt, the best element of the movie is the soundtrack, which not only has some great songs picked for it (from Moby to Audioslave) but also has a fantastic score. Borrowing from his previous work, with recognisable sound segments from both Heat and Collateral, the score uses elements of the fabulous Encore/Numb track by Jay-Z/Linkin' Park (as well as playing the whole track during the early nightclub sequence) and has some outstanding moments, leaving this powerful soundtrack a serious rival to any of those from Mann's previous efforts.

Unfortunately, despite all of these well-observed aspects, the end result still feels like an unfinished work. A beautifully and lovingly crafted thriller that will have you gripped from start to finish, but leave you feeling ultimately unfulfilled. Highly recommended, with reservations as aforementioned.

“Let's take it to the limit one more time.”