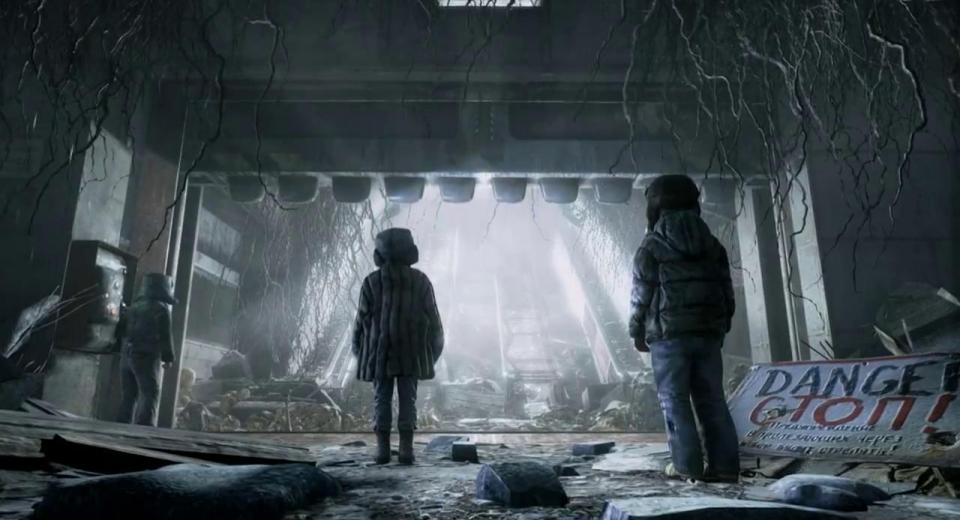 What it is about the apocalypse that is so appealing? Is it seeing how humanity fares in the face of true despair? How it brings out the best and worst in human nature? Or simply a chance to explore an alternate version of our world we hope will never come to pass?

Whatever it is, it’s not an original premise at this point. The end of days invariably plays out the same way. Resources dwindle, nations collide, all the red buttons get pushed and everything changes. Moscow is reduced to a population of thousands who scratch out a meagre existence in the old Metro tunnels beneath the city; while the surface hosts a variety of dangers from deadly radiation to grotesque mutants. All the red buttons get pushed and everything changes

Pretty standard stuff. Yet the Metro series manages to bolt these boilerplate elements together with some smart mechanics and saturates it with a thick sombre atmosphere which pulls you along its linear tracks.

Metro Redux retools and repackages both games in the series which were originally released on last generation consoles. Each has been tweaked in different areas to make this the best way to play either entry. Metro 2033 has received a dramatic facelift, with character models entirely swapped out for their higher quality versions from the sequel Last Light, likewise environments and cut scenes have been brought much closer to the fantastic fidelity previously only available on the PC. The difference here is striking, having played through 2033 in it’s entirety on the Xbox 360 it’s apparent a lot of work has gone into bringing the game to the next generation. The difference here is striking

Aside from the visual upgrade Metro 2033 inherits some game play benefits from it’s younger sibling, namely improvements to the stealth AI and game play. 2033 was certainly less enjoyable in this regard. Redux now allows players to actually partake in some stealth based encounters without fear of instantly incurring the wrath of every enemy in the vicinity if you make a minor wrong move. There are other nice touches like the improved user interface and being able to wipe off your gas mask or change your filter without holding 4 buttons, but largely it still plays like a survival horror influenced first person shooter.

That may or may not be to your taste, some might have preferred Last Light’s more action oriented approach to storytelling, which relied less on the slow paced ammo counting and breath holding moments of the original and relied more on large amounts of enemies and set pieces to grit your teeth through.

Either way 4A have you covered, each game now allows you to play through in one of two modes, Survival leans towards the 2033 experience with less ammo, slower reloads and tough enemy AI. Spartan focuses more on action, with different deployments of enemies and more resources. It’s a smart move which aims to neutralize potential criticisms of both games. Personally I enjoyed the slow paced survival horror nature of the original title and failed to bond with Last Light in the same way; so in theory I should have more success the second time around with the Survival. It certainly helps; but doesn't eliminate the fact that Last Light was simply designed to be more action oriented, in the end it feels more like another way to tweak the difficulty than anything else. Whichever way you choose to play, exploring the ruins of a decaying Moscow continues to be both thrilling and terrifying all at once. The laboured breaths as you reach the end of your filter, realising you are out of bullets and deciding whether to fire military grade rounds which also function as currency for upgrades and supplies are still as effective as ever and brilliantly juxtaposed against the respite found within the Metro stations which have become bastions of humanity.

As the guarded gates hiss open and the tender sounds of a plucked guitar float towards you, Metro reveals it’s softer side while you wander round the dark tunnels, filled with secrets and stories. This is where Metro tells the desperate tales found in its depths, the emergence of the Neo-Nazi fourth Reich, their communist rivals “The Reds” and the new threat of “The Dark Ones” from the irradiated surface. The sense of place in the Metro series is strong and despite being so unremittingly bleak I always find myself wanting go back. As is customary Redux comes complete with all the DLC from both games including the masochistic Ranger mode which boosts weapon damage, reduces player health and removes all the HUD elements in the game including QTE prompts. It’s an incredibly engaging way to play the game but requires some intimate knowledge of the game play systems and the ability to not only recognise when a QTE happens but also the good fortune to press the right key to actually survive it. As such it can only really be a viable option on a repeat play through for the most hardcore of fans.

If you never got round to playing either of the Metro games last generation then this is an attractive proposition. Two games for less than the price of one, both with visual upgrades to help them look the part and excellent single player campaigns which are still scarce on this new generation. It will still be considered a one shot deal for most; with no multiplayer or branching path's to extend the plentiful content offering. The new modes provide options but don't change the experience enough to warrant multiple playthroughs.

That still doesn't diminish the value or quality of what is on offer, those who have experienced the game before may know what to expect, but will almost certainly be surprised how much better the game looks and plays. With it not just living up to their fondest memories of this distinctive shooter, but more than likely exceeding them.