It's a Metal Gear game... But not as you know it 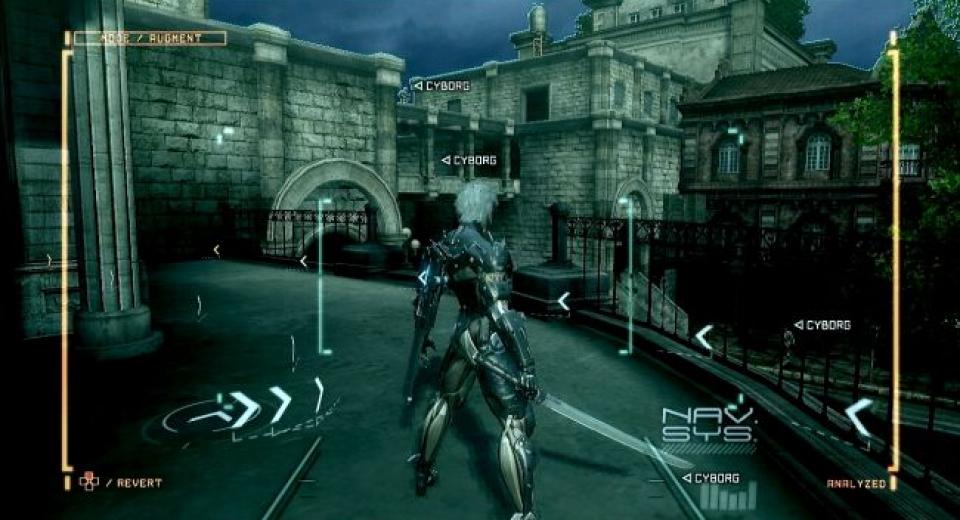 Trepidation is something that many gamers worldwide have these days and if someone rocks the boat slightly or messes with an established series, the likelihood is someone somewhere will kick off. Big time. Much like Ninja Theory giving Dante a makeover, Platinum Games are set to mess with the natural order of things on a bigger scale by crafting their own Metal Gear Solid game. Platinum have made their name by shoving out two pretty well received games in Bayonetta and Vanquish and their work hasn’t gone unnoticed with Hideo Kojima granting them creative freedom over this title.

Before we get any further let's get some basic things out of the way first shall we? This is NOT a typical Metal Gear Solid game which is handily suggested by the new name Metal Gear Rising: Revengeance. The stealth-em-up of old is not what you get here and, given Platinum's track record, would you expect something sensible and not over the top?

Revengeance really isn’t a word is it? Well Platinum Games don’t seem to care that they have slammed the words ‘revenge’ and ‘vengeance’ together and made one and, truth be told, this coming together of two words kind of represents this new Metal Gear title as a whole quite nicely. The two words can be thought of as the two development studios; Kojima Productions providing the staple Metal Gear Solid ingredients with Platinum mixing them together to make a new recipe from them. For those who weren’t and wanted something a bit different whilst they wait patiently for the next title, Ground Zeroes, then expect to find a game that is thoroughly enjoyable and rewarding at the same time. For those who were, then I’m afraid this probably isn’t the game for you but truth be told you should’ve seen that coming a long time ago. If a change of developers and direction wasn’t enough, a change of main character has also occurred with Raiden taking the helm this time around. His exploits tie into the Metal Gear story/plot and timeline but stand completely separate in terms of referring to MGS 4 or other games directly.

With Bayonetta and Vanquish as their proving grounds it was always going to be the case that Platinum would add a bit of flare, excitement and drama to this title and they have by the bucket load. The whole thing is one big dollop of fun whilst always retaining some of its original source material and making light of what Snake has got up to in the past.

Whilst it does this, it hasn’t lost the complicated nature of Kojima’s extensively weaved and hard-to-follow storylines which doesn’t really complement the gung-ho nature of the game as a whole. If there’s one thing this game isn’t it is slow paced because you hardly ever get a moments rest to catch your breath, there is always something going on. So with a heavy plot to think over it isn’t really ideal that you have to dispatch a group of enemies whilst you do so. New and old enemies make an appearance throughout Revengeance which keeps the balance of new game/old franchise rather stable. It’s enough to keep reminding you this is a Metal Gear game of sorts but just one that has a new direction. The militia sends cyborgs and machines after you (being the new enemies) whilst old enemies such as the three-handed bots and mooing mechanoids also make a return to the spotlight.

Boiled down, Raiden is on the hunt for a militia group who are kidnapping and smuggling children in order to take all their limbs and organs and create a cyborg army of their own. Haunting stuff but, at the end of the day, Raiden is killing off the very essence of what saved his, and other people’s lives and he is in a catch 22 situation in some cases. Some of the time though, he remains quite steely and emotionless especially when he gets his arm lopped off; the only thing he can muster is, “S***, not again.”

This wolf in Metal Gear Solid clothing starts off with a prologue which seems customary these days but this section doesn’t do justice to the rest of the game as it doesn’t look half as pretty as the following sequences. Whether this is done on purpose or not it’s hard to tell but it won’t really ‘wow’ anyone in the first sequence.

The following chapters are full of detail, secret areas to seek out and most importantly objects you can slice up to your heart’s content. The animation of Raiden and the poor object/person/cyborg in front of him once eviscerated is top drawer and is satisfying yet slightly disturbing at the same time. The only problem with giving the player a kick-ass sword is when you come to certain bits of the environment that aren’t destructible, you can’t help but be slightly disappointed.

The combat as a whole is immensely satisfying too with the melee system being the main method of taking down hordes of cyborgs. The combat comes down to selecting either light attacks which are quick but don’t deal much damage or heavy attacks which are slow and deal much more damage. Timing attacks based on your enemy's movements is the key to success as is blocking and parrying to break and counter. Where many games use separate buttons to counter, a clever system is in place here with the light attack button serving as the block button also when the left stick is pushed in the direction of an incoming attack. Initially, blocking seems a little tricky but 90% of attacks can be blocked by hastily pressing the left stick in the attack direction and jamming on the square button. Heavy attacks cannot be used to parry attacks which can be annoying when in the middle of a chain attack but being tactical in your move deployment reduces the number of received attacks.

The instances where some attacks do get through your defenses though, Raiden can end up in a state of confusion leaving you open to incoming assault. To break out of this, you must waggle the left stick old school style which either breaks you out instantly or can take an age for some reason.

You can simply go through the game hacking and slashing at anything that dares cross your path or you can be more tactical about your approach and dismember enemies and finish them off with devastating finish moves. Hitting the L1 button initiates slow-mo Blade mode whereby you can slice more accurately vertically or horizontally or in any direction you want with the right stick. Doing this allows you to yank out their core which gives Raiden a health boost and refills your slow-mo gauge. Battles are graded depending on the time taken to complete each and your style of play but there is one massive hindrance to the combat and that is the camera angle.

There are other modes of attack rather than going balls to the wall every time an enemy comes into sight which mix things up and keep you on your toes. Rocket launchers, grenades and other items can be used to transform your enemy from one piece into a thousand. Sneak attacks can also be utilised if you wish to take a more traditional Snake-like approach to certain sections. There’s also a testament to the good old cardboard box too with it being a useable item should you want to crawl about in the dirt once more. Raiden can be upgraded throughout the game through the acquisition of skill points which come from killing enemies so in the end, the better in the end. New combos, suit upgrades and new weapons can be purchased at the end of each chapter turning you from a badass killer into a super badass killer.

If there is one thing that must be applauded throughout it’s the soundtrack that accompanies battles which is suitably rousing and dramatic which makes those hard fought victories even more satisfying. The change in direction for this title means that electronic and heavy guitar pieces make a welcome appearance upon the opening of each battle sequence.

Humour is something that is hard to convey within videogames but Platinum have pulled it out of the bag here with parts of the script genuinely being worth at least a little chuckle every now and again. Most notable is where one of your team says, “You need a DOOMP” with DOOMP obviously relating to some fancy technology acronym.

Incoming chatter takes place via the faithful intercom system, the Codek which keeps things real in terms of hitting you with classic Metal Gear mechanics. Furthermore, the same alert noise (which everyone loves) is in place when you inevitably get spotted whilst the alert and caution phases are still present.

Whether in an attempt to be humorous or not, should you have the subtitles on, foreign English speakers have their own set of text to translate what they’re saying. It’s hardly a translation as you can tell what is being said by them but it’s funny to see what native words mean when translated into ‘English’.

In comparison to a lot of games out there, Revengeance is fairly short in terms of hours taken to complete with the average person probably clocking in at around the 5 hour mark. But what it lacks in length it makes up for in provision of entertainment, replay value and fun. With collectible virtual reality challenges to uncover from the single player campaign, you can go back and find the ones you first missed and then take them on.

It is important to maintain a clear and open mind when playing this game otherwise you may find yourself disliking because you want it to be something that it never wanted to be; an MGS 4 successor. Whilst old mechanics and pieces are in place throughout the game they serve as nothing more than reminders that this game is part of the same universe but has a completely different agenda to its predecessors. For anyone that gives this game the time it deserves, they will find one that is well crafted, looks and plays great and one that breathes fresh air into a well-established franchise.