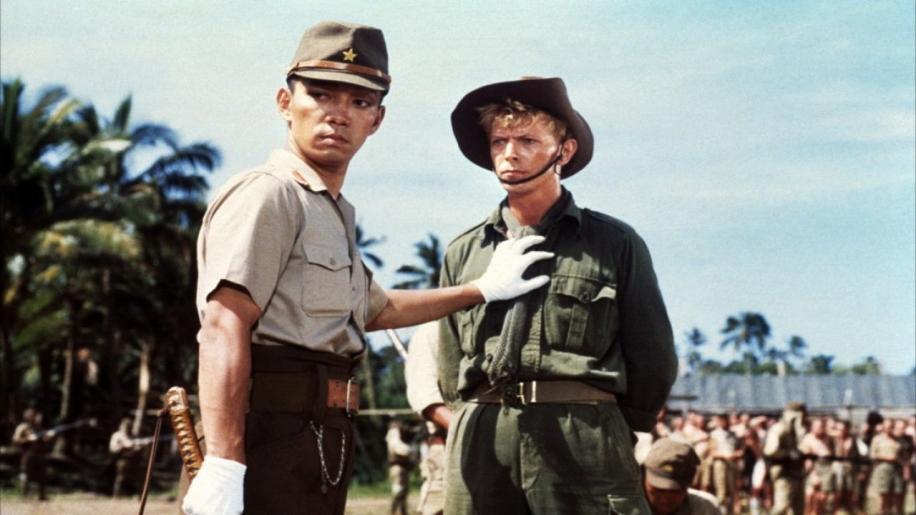 When you think of Prisoner of War movies, certain titles automatically spring to mind. Nobody could forget ‘Colditz’, ‘Stalag 17’ or probably the most commercially successful of all ‘The Great Escape.’ I wonder how many would immediately recall the 1983 production, ‘Merry Christmas, Mr Lawrence’ starring David Bowie and Tom Conti - which stirred up quite some interest in the cinemas when it was released. It was a very different kind of war film that explored some themes generally left untouched by the genre, was more of a psychological drama and – horror of horrors – required the audience to think.

The movie was also the English language debut of Japanese ‘auteur’ director Nagisa Oshima whose name being attached to the project was what attracted rock star David Bowie. Another interesting piece of casting was that of Japanese TV comic ‘Beat’ Takeshi Kitano in a serious role. The film also had a very memorable haunting score, the main theme of which stayed in the pop charts for quite some time, composed by Ryuichi Sakamoto - who also took the role of the camp commandant Captain Yonoi.

It doesn’t ring any bells? Then let me remind you. The film opens in a Japanese Prisoner of War camp on Java with Colonel Lawrence (Tom Conti) being wakened from sleep by the rather aggressive Sergeant Hara (Takeshi Kitano) who wants him to come and witness something. The event in question is the enforced suicide (or Hara-kiri) of a Japanese guard who has been caught in an ‘inappropriate’ activity with a young Dutch Prisoner. Lawrence is, of course, horrified by this barbaric behaviour.

We’re then dropped into another horrific sequence as Major Jack Celliers (David Bowie) is on trial for giving himself up to the Japanese in order to save the lives of some villagers and, apparently, not lying about his name. The Japanese have no respect for him, as a Japanese soldier would rather kill himself than be captured. We see him set up with a mock execution in front of a firing squad which continues right up to the point where blank rounds are used in the rifles.

He then arrives in the same POW camp as Lawrence and it’s suspected that the commandant, Captain Yonoi, feels something more than fraternal love for him. This is, indeed, new territory for your traditional war movie. We do, however, witness the traditional brutality including violent beatings, food shortages and a war of wills.

Lawrence is the translator in all dealings with the Japanese captors as he understands the culture and the people, yet his commanding officer refuses to listen to him – seeing them only as the enemy. Lawrence uses his intelligence and negotiating skills to protect Celliers and the rest of the prisoners by forming a limited working relationship with Sergeant Hara, which pays off one Christmas when the drunken Hara releases his two prisoners from solitary confinement.

There’s a very effective showdown near the end when Celliers calmly walks through the assembled prisoners, who are being threatened with a heavy machine gun, and kisses Captain Yonoi in front of everyone. This is quite a shocking scene – and I still recall the collective intake of breath by the audience in the cinema back in 1983.

Because of the violence it’s quite a difficult film to watch, yet it’s also quite hypnotic as you want to see who’ll win the game of psychological warfare that’s going on between Lawrence and Hara as well as between Celliers and Yonoi.

There’s an interesting back story to Celliers character too, involving his younger hunchback brother at school whom he failed to protect. Celliers carries the guilt of his promise to go back to him once the war is over – and perhaps its his inability to face up to this that motivates his self destructive behaviour.

Although David Bowie was the big box office draw that put bums on seats at the time of release, it was really Tom Conti who walked away with the kudos in the acting stakes. At the time, he was ‘flavour of the month’ having appeared in several films including ‘Shirley Valentine’. His underplaying style works well here and causes greater impact when he erupts, railing against the Japanese and British officers alike.

There’s a very moving scene towards the end of the movie between Sergeant Hara and Colonel Lawrence. The Japanese have been defeated and Lawrence visits Hara in his cell prior to his execution. The two share a last few moments together and Hara tells him that he’s ready to die. The sensitive Lawrence wishes he could release the Sergeant but cannot. The final shot where Hara says “Merry Christmas, Mr Lawrence” – reminding him of how he once showed mercy (although drunk at the time) can be taken as a last desperate plea for his life or just a final farewell. Either way, it’s beyond Lawrence’s influence to do anything to help. This scene is played very well by Japanese TV Comic Takeshi Kitano. Many an actor would try to wring every drop of emotion from this scene. As it is, Kitano plays it all matter of factly and honestly – which makes us feel for his character all the more.

The direction by Nagisa Oshima tells the story well without spoon feeding the audience. There are a few shots within the prison camp that seemed unconventional, with the camera panning left and then right. This would be labelled ‘hose piping’ on many media courses and a definite ‘no-no’ for cameramen. Oshima also surprised his producer by doing very few takes and, when challenged, said that he’d got what he wanted. There’s confidence for you. No need for another take just for safety.

There’s an awful lot going on in ‘Merry Christmas, Mr Lawrence’ and I’ve only provided a brief overview in the hope that those who haven’t seen the film yet will take the chance to discover it for themselves. It’s not the kind of film that will appeal to the blockbuster movie, car chase and explosion a minute brigade. It’s a much more thoughtful and thought provoking production, which requires the audience to work things out for themselves. Not your usual POW film, not your usual director. For those who can handle something that little bit different.