So, you think you're smart eh? 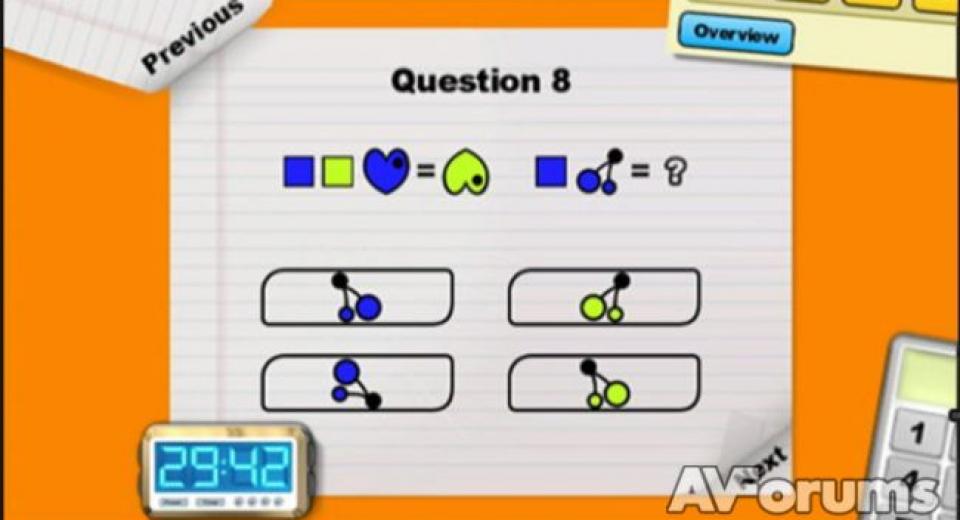 So called “brain training” games may have questionable science propping up their purported beneficial effects, but there can be no denying they’ve become big business.  A collection of puzzles that have no storyline to indicate progression and certainly don’t have the X factor of simplistic classics like Tetris to instil high score addiction.  It sounds like a blueprint for bargain basement gaming, yet the craze continues.  With no Dr Kawashima on the 3DS yet, we see our first such title in the form of Mensa Academy.

As far as tie-ins go, linking any brain game with the world famous IQ testers is sound thinking.  But is the licence a shameless crutch or an indication of the game’s ability to reach hair-pulling status?  Well I put my barnet on the line to find out.

Boasting 100+ mini-games, puzzles and challenges you’d be forgiven for thinking you’ll burn through that amount in no time.  The real draw for anyone who likes to whip out the Telegraph Prize Crossword on the train will be the promise of “genuine Mensa-level questions” which will apparently “allow you to find out your Mensa score today”. It’s a casual multi-format title, so don’t expect much gloss.  Visuals are clear but pretty basic, however the music is pleasant enough as far as head scratching audio goes.  The 3D effect works quite well thanks to the 2D layered approach of many of the puzzle set-ups, some appearing like an old fashioned shooting gallery at a fair.  Unfortunately almost no effort has been made to utilise the second screen beyond its touch capabilities.

Your first choice is “play”, “coach” or “test”; there isn’t much difference in the mechanics of the three options.  Far from it representing a splitting of the approach it instead simply changes the severity and nature of the progression - they’re all puzzles (well what did you expect?) split up into five categories - language, numeracy, logic, visual and memory.  If you go with “coach” you may be disappointed, there’s no real input in training from a Kawashima-like boffin figure, merely a board of challenges, some locked, which you need to meet certain scores within in order to go for Bronze, Silver and Gold.

For some the coach feature will be a nice drop-in and drop-out way of having a quick blast as the puzzle selections all have descriptive names making it fairly easy to find your favourite or those you need to brush up on.  Things like “missing letters” and “fractions’ need no explanation, but there are a few more obtuse descriptions like “symballistics” and “cacophony” whose names offer little insight.  Strangely there isn’t an equal amount of challenges for each sub-set of puzzles; language, numeracy and logic all have a reasonable seven whilst visual and memory make do with a paltry three.  Considering the game boasts being fun for all ages, it is slightly odd that the latter two choices - being based on what is seen and thus easily understood for little minds - would contain the least puzzle mileage. “Play” will probably be where you spend most of your time, being that it houses the majority of the puzzles.  Each of the five categories has twenty sets of challenges to complete, all set against a timer and obviously rising in difficulty.  The early stages are a breeze for adults with a couple of brain cells to rub together, but be warned, don’t fall into the trap of convincing yourself you’re some kind of genius offspring of Derren Brown and Carol Vorderman and opting to try out the Mensa test.  Stick with either play or coach, plough through the early levels and you’ll get to the meat of this game.

It’s mainly fairly obvious word and number conundrums  - mixed letters, numerical sequences and the like - but a few curveballs start to land in amongst the Weakest Link-like vaguely embarrassing fodder.  The key is concentration, more than once I found myself dismissing a puzzle before then getting unnecessarily flustered by the next.  There’s a reasonable degree of variety, but the game focusses on what rules can be easily understood, leading to there being at no point a cause to furrow your brow and accuse the puzzle-setters of putting in a poor description in a vain attempt to hide your blushes.

The main issue the game has is the competition it faces.  Dr Kawashima has set the benchmark, and with the handy feature (though we all know it’s not scientific) of displaying and tracking your  “brain age” Mensa Academy has only one ace up its sleeve, that of the Mensa test itself.  Now here’s where the game will feel strangely schizophrenic, particularly to those adults who’ve leapt in, turned their oh-so superior noses up at the unedifying prospect of grinding through the easy puzzles and gone straight for the jugular; am I Mensa quality?

Thirty questions to be answered in fifteen minutes, it certainly doesn’t feel like a commuter friendly bit of puzzle fun.  Watch as the clock goes down and grind your teeth as the seconds fly by whilst you sit in deliberation.  Like any true exam you can go back to amend answers, so it’s OK to fly past some of the trickier questions.  They’re mainly multiple choice, but don’t let that fool you, some are devious.  Ultimately, none of the questions are nonsensically hard, but the time limit is what creates the tension.  In double the time you’d feel a genius, but the fifteen minutes allotted is just right for you to feel the pressure. The test totally changes the way you view the game, fun for all the family - in gaming terms - has come to mean simplistic charms that adults who’ve yet to slide into the malaise of middle-aged cynicism may get something out of .  Mensa Academy feels an altogether different prospect, giving two different markets - both kids and adults - something.  Unfortunately the result fails to hand enough impetus to either to continue playing for long.

The mechanics are sound in puzzle terms, but adults won’t want to wade through activities like identity parades where you pick out the oddball wearing the correct strange set of clothing (Viking hat and flippers for example).  But to find out if there’s anything significantly more taxing you’re forced to do so.  Kids on the other hand will take one look at the Mensa test and baulk at the stuffy nature and obscure looking sequence conundrums.

Mensa Academy aims to provide fun for all ages, but in asking adults to follow a linear progression to get to the tougher puzzles it quickly becomes clear who the main game is aimed at.  The use of the Mensa test will draw a few older puzzlers in, but it’s stuffy and lacks any inventive use of the 3DS’ capabilities, and given the plethora of browser based IQ tests out there that one could access on a smart phone, the unique selling point is stretched thinly.

It’s fun for a while, and has enough variety to keep light hearted and easily pleased puzzle fans occupied, but the use of Mensa testing is so plainly implemented that it feels tacked on.  You shouldn’t expect much from casual puzzlers, but when they carry the stamp of top boffins and Square Enix, a little imagination and a touch more polish wouldn’t have gone amiss.