“There’s something wrong with Men in Black” 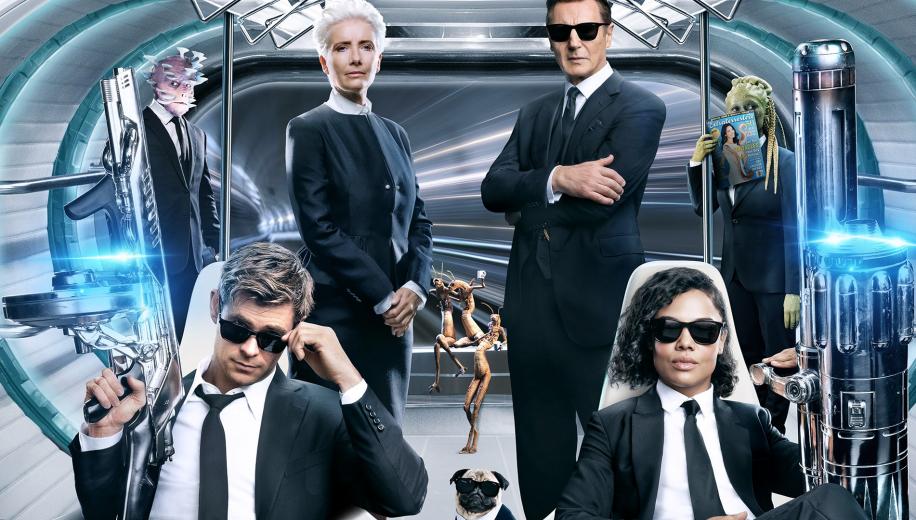 Yes, they’re back... again, and the only thing that’s alien is fun. The fourth Men in Black film crashes clumsily to earth.

The original Men in Black (1997) is one of those films that entered the public consciousness surreptitiously and just stayed there – sort of like an alien lifeforce that wheedled its way into human life and made itself at home, you might say. Most people have, somehow, seen it, and even if you haven’t you’re likely familiar with the imagery and concept – Will Smith and Tommy Lee Jones standing, arms crossed, in black suits with big black Wayfarers on, ready to fight against intergalactic threats.

The film, with its sci-fi concept, charismatic leads and easy humour, was ripe for sequel farming, and spawned Men in Black II (2002), Men in Black 3 (2012), and an animated TV series that ran from 1997 to 2001. It has now, 22 years later, given rise to a third sequel – Men in Black: International. The main question one has to ask about the existence of this film is “... why though?”


A transparent cash-grab aimed at the summer blockbuster market

2019’s entry into the MIB universe could arguably be listed as a spin-off, taking place as it does across the Atlantic in the UK. Set after the events of Men in Black 3, the film introduces new agents but reprises some of the key roles from previous films, including Emma Thompson’s Agent O and the beloved Frank the Pug (voiced by Tim Blaney). Chris Hemsworth is Agent H, one of the UK’s top extra-terrestrial spooks, while Tessa Thompson plays Agent M, who joins the bureau in the film after an impactful run-in with an extra-terrestrial invader in her youth. The pair are overseen by High T (Liam Neeson), the head honcho of the MiB bureau in London, who once partnered Agent H on a high-stakes Parisian mission.

The filmic concept – which is based on the 1990 comic book series by Lowell Cunningham – was wearing fairly thin by the time the third film came out in 2012, but this instalment really reiterates just how little there is left to explore. International does, at least, make a bit of an attempt at relevancy, by prodding tamely at the concept of the aliens as misunderstood migrants. The problem is that this idea dwindles into nothingness, with the film’s run-time padded out by fairly chemistry-less scenes, flat jokes and uninspiring action.

In theory, this cast would suggest something at least half-way entertaining, but unfortunately the pairing of Neeson and Hemsworth doesn’t come anywhere near the Jones-Smith axis of the original films, and even Tessa Thompson’s introduction to the franchise feels lacklustre and uninspired by some almost-average material. Both Thompsons are wasted by the script, which is every bit a third-sequel-to-a-decades-old-alien-action-franchise. There are very few attempts to craft an original story, with the resulting plotline feeling very by-the-numbers, while lines of dialogue across the board throughout the film feel flat. A rare highlight is Pawny, an alien creature voiced by Kumail Nanjiani, who at least brings something a bit creative and fun to the film.

You could be forgiven, after International’s opening sequence, for thinking that might actually be a pretty good summer blockbuster. There’s a strong start, which explains M’s backstory, before the film descends into beige-ness. Where the original film succeeded – in crafting characters that fit Smith and Jones like a glove – this one falls well short, serving Tessa Thompson and Hemsworth underwritten, underdeveloped and not well-suited characters to try to make something of.

This is a film conceived of the dusty, old and of-the-90s parts from the original franchise. Men in Black was a success, and has become a well-known part of Hollywood action/comedy lore, but International proves well and truly that times have changed. It seems like a real missed opportunity for the Tessa Thompson/Hemsworth pairing; both Marvel superstars who have proved their bankability and likeability before. This film, an over-extension of a well-worn franchise with two marketable stars slapped on the poster with little-to-no character development in the actual film, feels a lot like a transparent cash-grab aimed at the summer blockbuster market. The original Men in Black wasn’t exactly a masterpiece of cinema, but International makes it look like a veritable piece de resistance.

At some point in the film, M mutters darkly “there’s something wrong with Men in Black”, which, as it turns out, is basically the most insightful bit of dialogue in the film. The signature move of the Men in Black is to wipe the memories of those who encounter aliens with a handy ‘neuralyzer’ - by the time the credits roll you’ll be wishing you had one of your own.