I played it so you don't have to. 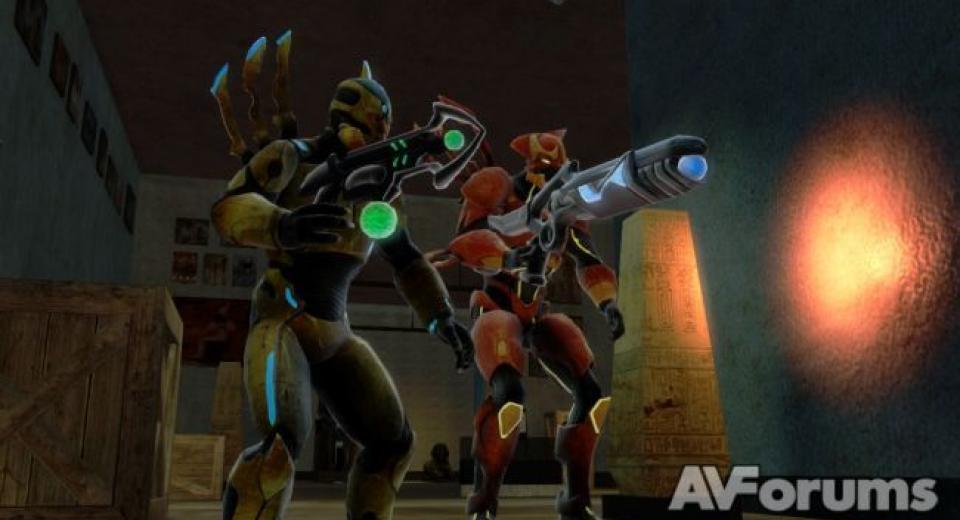 There's no joy in writing a negative review, but then there's no joy in playing an abysmal game. Men in Black: Alien Crisis is one of the poorest retail releases I've played in a long time, and a strong mid-year contender for worst game of 2012.

It's not just the terrible graphics, audio, controls and story that make this such an unrelenting chore to play. The problems run deeper than that: This is a game with no soul. It's a void, a vacuum.

As a minimum, players deserve a release that has been developed with some degree of affection, not least when there's such a deep well of relevant source material from which to draw.

But it's hard to believe anyone involved in allowing Alien Crisis to land on shops' shelves cares about the Men in Black franchise or this title's potential customers at all. In fact, it demonstrates utter disdain. So let's get down to specifics.

Warning bells will sound a few seconds in to the opening cinematic. The phrase "PS2-era graphics" gets thrown around too often, but when the first image in a game is of buildings that look like they've been lifted out of the computer-generated sequences of the 1990's Spiderman cartoons, you know the game won't be a looker.

The camera pans down to reveal there's a robbery in progress.  The thief is Alien Crisis' player-character, a man who is soon to become Agent P.

If you had seen the box art and bought the game believing the beshadowed man is one of the films' protagonists, you're going to be disappointed. Despite clearly rushing development to coincide release with MiB3, the game barely overlaps with the films at all. There is no Will Smith. There is no Tommy Lee Jones. There's just this idiot Agent P whose 'humourous' quips become more and more irritating as the three or four hour story progresses.

The character models are awful and the animation is worse. Combined with poor scripting and amateur voice acting, Alien Crisis' cut scenes are a masterclass in how not to do story in video games. In-action dialogue between Agent P and his dull female partner fares no better - like everything else in this pitiful, cynical little game, the conversations are annoying and lacking in substance. Ah! But at least shooting things will be fun, right?

Alien Crisis might look like a typical third person shooter but it is not. It's played entirely on-rails, presumably to facilitate the use of various peripherals like the light gun or Move controller. Agent P can strafe and duck behind cover, but moving between areas is automatic once a section has been cleared of enemies. One wonders if Alien Crisis is not a feeble-minded relation of the ageing but superior Time Crisis.

Played using the Xbox gamepad, shooting is (quite literally) a hit-and-miss affair. The collision detection is either broken or the finest example of true randomisaton any computer programmer has yet achieved. The reticule is floaty and inaccurate, and there is absolutely no sense of contact when shooting the aliens.

There are various attachments to guns that enable you to trap your enemies in bubbles, freeze them, and so on. This could have been interesting (in the spirit of Mass Effect's biotic powers for example), but the shooting is so poor that any potential satisfaction is completely undermined.

Fun Labs have added some variety in the form of investigation sequences that require you to scan the environment ad tedium. And don't get me started on the 'stealth' sections or the lengthy dialogue sequences. Honestly, during these sections it's like Fun Labs have raised haptics to a new level: it physically hurts to play. But as I said at the start, the biggest failing of this game isn't in the mechanics or visuals, it's the total lack of regard for the source material. Men in Black at its best is amusing, action-filled and encompasses a relatively wide lore: perfect for a video game intellectual property. In that context, Alien Crisis is an insult.

The idea that some well-meaning parent will spend £40 buying this ugly snoozefest for their 12 year old is deeply upsetting. So if you're to take anything from this review, take this: Avoid Men in Black: Alien Crisis. Don't buy it for yourself, and don't buy it for anyone else. A truly appalling game.

An on-rails third person shooter featuring none of the characters, charm or fun that underpins the success of the movies. Alien Crisis is an indefensible attempt to pry £40 from well-intentioned customers, with absolutely no regard for producing a quality product. A shameful insult to gaming as a medium, to the MiB franchise and to gamers everywhere.