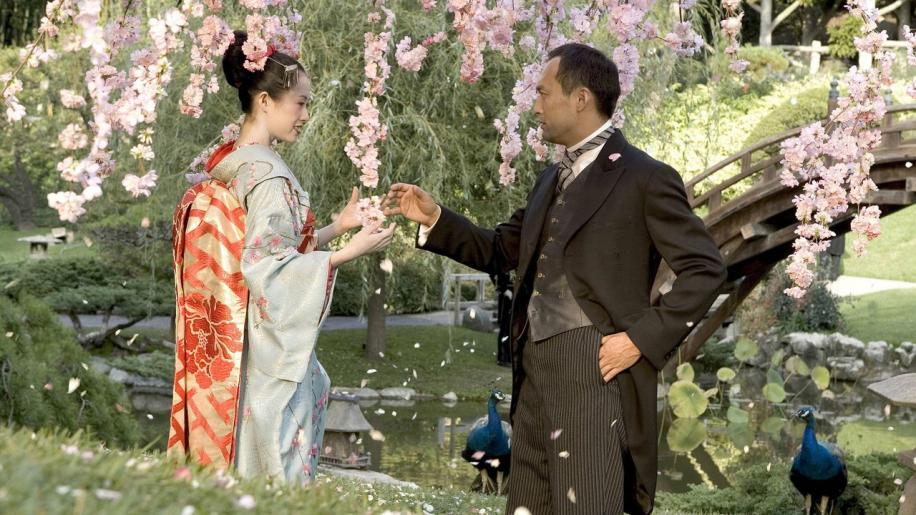 Fresh from his scintillating Chicago Rob Marshall ventures east to explore the mysterious world of the Geisha. Adapted from Arthur Golden's celebrated novel, he certainly had a good grounding to start on.

Set in post war Japan the story is presented to the viewer as a narration by the main character herself, Sayuri (Ziyi Zhang). She reveals how her poor fisherman father sold her and her sister in to a life on bondage - a life of unknown slavery, ultimately destined to be Geisha. To be Geisha in Japan is revered, looked up to; a figure of grace, eloquence and beauty. The sisters are sold to different Geisha houses, something that understandably distresses Sayuri. Not only has she now been cast aside by her family, dumped in a large city from her humble village beginnings but the only person who might be able to offer her a glimmer of compassion and friendship is also removed from her grasp.

We follow Sayuri's beginnings (still using her 'real', non Geisha, name - Chiyo) in the Geisha house as she serves the owner and her Geisha charges. She is beaten, abused and down-trodden - especially by one fervent Geisha - Hatsumomo (Li Gong). Finally, after an act of kindness from a passing gentleman, she accepts her lot in life and knuckles down, eventually desiring the accolade of Geisha herself. To these ends she embarks upon a life of training to become one of the graceful women she has come to admire.

There is rival jealousy abound in the Geisha house. Hatsumomo the current leader of the pack despises Sayuri realising that she may one day take her crown as top Geisha. Constantly putting her down and breaking her belongings and at one point setting fire to the house to get back at her. Through all of this though Sayuri is ultimately accepted by the Geisha community and it is not long before she is on the path to becoming one of the greats. Charming, musical, coy, a listening ear, a trusted companion she rises the ranks and becomes the Geisha everyone wants to be seen with. It is here that she will meet her final destiny.

Memoirs of a Geisha is a captivating storyline and pay close attention to it. Many characters are introduced, some briefly and reappear later in the story as a connecting arc or a major new plot development. If anything then it would have been good to have seen Geisha run on a little longer, if only for it pursue the development of some of these characters. However the lack of time reduces the depth of the characters and their motivations.

In saying that though I did feel total apathy for the two sisters. For them to be uprooted in the way they were then abused as slaves the viewer cannot feel anything but compassion. In the end you are hoping that these two will fight within the system to grow with it and finally emerge as butterflies regaining not only their freedom but also their self respect and wealth. The character development to this degree is handled well.

As the Second World War ravishes the Far East we see other plot developments come to the fore. Some Geisha are moved on again to work in the outlying fields. At the end of the war and the allied occupation of Japan they return. They return though to a much worse place. Whereas once Geisha were respected, but perhaps abused within their own Geisha house, now they are simply abused. Looked upon by the occupying forced as playthings, simple dolls to cater for their every whim... prostitutes not entertainers or companions. This aspect of the film is skirted over a little. What could have been an interesting investigation into the ability of any occupying force to subdue not only a violent militaristic echelon but also humble and humiliate the cultural aspects of the society is washed over without too much questioning.

Essentially a rags to riches story it will always warm your heart, taking it with you though to the depths of sadness as the two sisters grow, part and Sayuri on her own matures in to the woman she will become. Although boasting an impressive head count on casting the actors fall into one or two categories... Geisha and client, both shown to us on screen having true emotion. It's a joy to see Ken Wannabe, playing The General, in something other than a blustering war-monger. In Geisha he shows a more emotional side to his acting and a welcome one at that. For the rest of the actors it must have been a terrific struggle at times. Some speaking only Chinese and some only Japanese but always on screen conversing in English, that's dedication which has to be respected.

There's no doubt about it Memoirs of a Geisha jumps off the screen, a visually stunning film which is just one of the reasons we enjoy the movies. Cinematography, costume, makeup and set design cannot really be faulted; all perfectly tailored to take you back to a time long since gone. In the end it's very rare for any film to do justice a book on which it is based. Peter Jackson had the right idea when he realised it would take upwards of 12 hours to tell the Lord of the Rings trilogy. At just under 2.5 hours Geisha does attempt this but ultimately runs out of steam and would have required at least another hour I think to have taken the best from it. I enjoyed Geisha for what it was though, an attempt to bring to life a bygone era in a culture not many in the western hemisphere seem to comprehend. On this level I feel it works, on the level of extracting every facet from the original novel it would seem it doesn't quite hit the mark. Certainly recommended though.