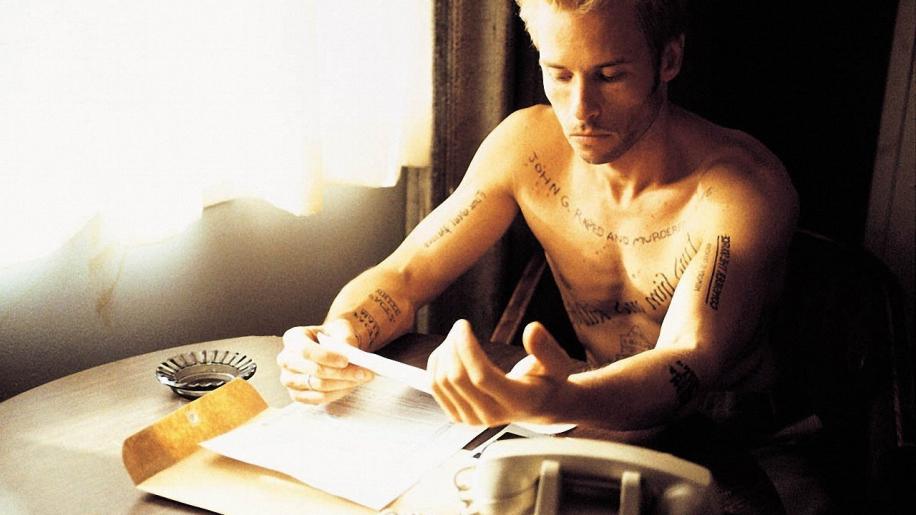 Perhaps an odd choice for review given the amount of time it has been on shelves for, but the year 2000 thriller Memento crops up in many lists of the most acclaimed and highly rated films of recent years. Thus, the decision to cover one of the imdb's top 250 movies was made all the easier. It not only stands as one of the higher ranking modern pieces in the list, but also as one of the first flurry of Blu-rays to appear in retail outlets worldwide.

For those who have perhaps managed to spend the last few years pocketed away in a remote hermitage, the story of Director Christopher Nolan's rise up the ladder of Hollywood has been nothing short of meteoric. This speedy ascent has seen him transform from small scale weekend film-maker to the man behind the lens of the biggest Hollywood blockbuster of 2008. That it also happened to be one of the most sought after franchises in the world of comic book adaptations - that of the Batman universe - only further serves to prove his case as a man who has truly arrived. With his name firmly plastered on many a cinephile's lips, having reinvigorated a brand that had wavered and spent a fair degree of time in the doldrums of kitsch hell and made it into not only a lucrative product once more but arguably injected it with the greatest dose of artistic vision it has yet had, we now look back at his earliest outing into the realms of professional film-making.

Memento, based on the short story written by Nolan's brother Jonathan, tells the tale of a man named Leonard, played by Guy Pearce (LA Confidential). For all intents and purposes, Leonard seems to have little about him that is striking to an outside observer. His appearance is that of your standard late thirties white male, dressed in reasonable attire with no indication of anything that would deem him noteworthy in any other narrative. The central premise that raises him from being a run of the mill figure and identikit protagonist is that of a physical or perhaps psychological abnormality. Though no visible damage is apparent, Leonard has suffered an injury to his brain which has left him unable to form new memories. Supposedly based on a real condition - anterograde amnesia - which occurs when a party has received damage of a certain kind to the hippocampus region of the brain, it differs from standard amnesia. Leonard is not deprived of his memory in any complete state - he is not a blank slate unable to know who he is, rather he simply cannot hold onto any memory that his brain has formed after the time of his injury.

In itself this is a novel invention worthy of a film but things aren't as simple as that. This is not a heartfelt tale of one man's triumph over adversity, rather that of revenge and paranoia. Our hero/antihero led nothing more than a normal humdrum life as an insurance investigator prior to a break in that left him with his current condition and his wife raped and murdered. This is what drives Leonard forward into a labyrinthine quest for answers and vengeance. He is helped along the way by Teddy, played by the ever weasely Joe Pantoliano. He is a character that is at once calming as a companion and yet unsettling in his Cheshire Cat style demeanour, ever grinning as if party to a joke our protagonist would not understand. This addition of a seemingly over interested, and joyously helpful, sidekick only further serves to create an atmosphere of inherent unease.

So the premise is strong and the central characters well realised in their inclusion in this murky tale, but the standout element that had all and sundry talking about the film the next day was that of the timeline/editing technique. Rather than simply plump for a standard chronological order to proceedings, the viewer is instead plunged headlong into the very mindset of Leonard. From the outset, which is in fact the end sequence of events, we have hit the ground running and know what the startling conclusion to the narrative is. What we do not know is how we got there and what the motivations behind this murderous scene are. Much like Leonard, we are clueless and the actions carry little or no meaning unless we can discover what lies behind them. It raises an interesting point with regard to how one judges meaning and worth, something that is raised sporadically throughout the plot, with Leonard stating at one point “Just because there are things I don't remember, doesn't make my actions meaningless”. If only things were so clear cut.

The central timeline of key happenings is played backwards with the result of an action preceding the motivation. This places the audience into the role of one unable to comprehend exactly in which direction we are supposed to be going and negates the possible relationship between the viewer and protagonist becoming unequivocally uneven. What could have been a situation where those looking into the world had key insights and were capable of knowing when danger lurked around the corner for Leonard, instead becomes one of a more even partnership. We are unable to judge his actions as we are kept in the dark as much as he is and thus he performs less as an inanimate player and more as a guide through this maze-like world of jumbled timelines and mixed thoughts.

The beauty of the film lies squarely in its power to disorientate. Cinema audiences who crave cerebral thrills would no doubt have been capable of keeping up with a chronological order that is skewed backwards but Nolan throws an extra piece into the fray. Mixed between the scenes that tell of the main character's story in the present to hunt down his and his wife's attacker, we are presented with flashbacks to phone conversations with an unknown party. Here Leonard tells of another man who he claims to have come across with the same condition - Sammy Jankis. In order to avoid completely wrong footing the audience to the point of complete disillusionment with regards the task of unravelling the thread of the story, these segments are played out in black and white. These moments are vital to understanding the narrative and their inclusion in such a throwaway manner is an absolute masterstroke of subtlety on the part of the director.

What could have been a linear tale that simply required the audience to observe the frailties and struggles of a third party instead became a form of partnership between character and viewer. Nolan's follow up, the Al Pacino starring Insomnia may have gained a reasonable amount of acclaim but it followed too close a template and mirrored this entry in too many ways - the flawed central character whose ailment prevents them from perceiving things clearly, questionable motivations and the re-use of a small part of film that is never played out in full until the end, which subsequently throws the entire tale on its head and finally enlightens the viewer. As sound as the formula is, you cannot escape the fact that the first time a trick is pulled off will always leave the most lasting impression and the revelation that is to confront those willing and able to traverse the winding roads of Memento is still arguably Nolan's greatest cinematic coup.

A tale of vengeance and fully realised, stylised, yet believable characters set in a world of unease and paranoia, all masterfully brought to the screen in a manner which engages rather than dictates to the interested party looking on from their armchair. The twisted chronology of the timeline is crafted in such a beautifully precise way that the pacing of the entire narrative never dips in momentum. That this all came from such minor roots and a 25 day shoot only further emphasises the monumental achievement of creating a truly intelligent piece of cinema and a story that rewards further viewings.