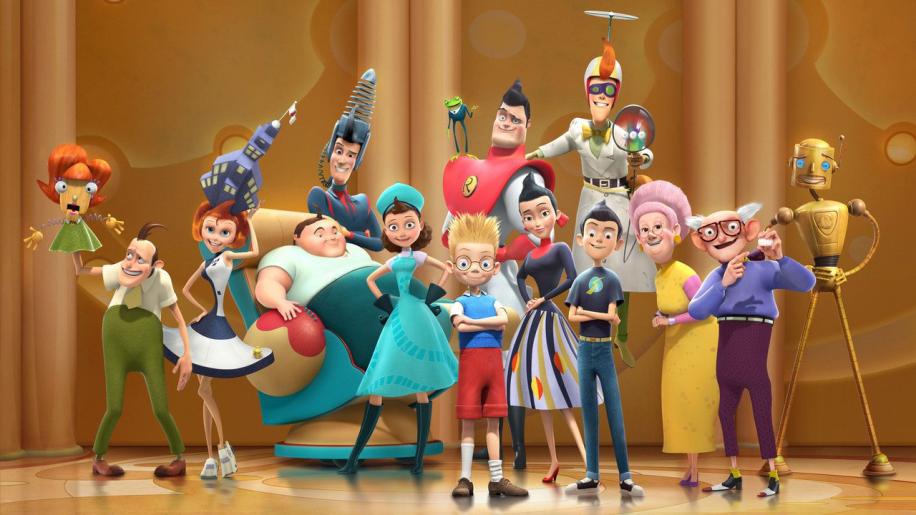 “Around here, however, we don’t look backwards for very long. We keep moving forward, opening up new doors and doing new things, because we’re curious... and curiosity keeps leading us down new paths.” - Walt Disney

It’s a funny old world sometimes, sacked from Disney because they weren’t interested in his ideas about using computers in animation, John Lasseter went on to co-found Pixar and direct the original Toy Story. Years later after Pixar had changed animation forever and Disney had bought the company outright, Lasseter returned to the studio but this time as head of animation. The first film he inherited was Disney’s 47th animated feature, Meet the Robinsons...

Meet the Robinsons had actually started life as a live action film before it morphed into a computer animated feature following the increasing popularity of such films and Disney’s decision to shut down their cell animation department. The director and main driver of the project was Stephen Anderson, who felt a special affinity with the story because the hero was an orphan who wanted to be adopted and Anderson himself had been adopted as a child. Anderson and his creative team took the bold decision to storyboard the entire film before presenting it to the Disney executives for green lighting. It was something of an experiment but it paid off and they were on their way, even if it would be nearly five years before the film was released.

The story is based on the book A Day With Wilbur Robinson by William Joyce, which is about a boy named Lewis who spends the day with Wilbur Robinson and his eccentric family. The film’s screenplay uses the basic premise of the book and the characters of Wilbur, Lewis and the family but invents its own plot, introducing a time travel element and a villain. In the film, we meet Lewis, an incredibly intelligent child who is always inventing things but keeps getting passed over for adoption. As a result, Lewis becomes obsessed with retrieving his earliest memories of his mother, who had left him at the steps of the orphanage as a baby. Lewis decides to demonstrate his memory scanner at the local science fair but it fails due to some tampering from a mysterious villain referred to as ‘Bowler Hat Guy’, who steals the scanner. Lewis then meets Wilbur who it turns out is chasing the 'Bowler Hat Guy' who has stolen one of only two time machines in existence - Wilbur has stolen the other. Wilbur then takes Lewis into the future, where Lewis meets Wilbur’s eccentric family and they all try and stop the ‘Bowler Hat Guy’ from changing history.

Of course this is a time travel story so there are a few twists to the plot and more than a few paradoxes if you think about it but the characters are likable and the film races along so you don’t mind all the illogicalities. However when Lasseter arrived he asked to see the film, which at this point was nearly complete. Lasseter felt that the film still needed work, specifically he felt the villain wasn’t scary or threatening enough, the pacing needed changing and that the ending wasn’t strong enough. As a result of these suggestions, the 'Bowler Hat Guy’s bowler hat was made into a robotic sidekick called Doris, who has evil ambitions, there was a dinosaur chase added, the pacing was changed and there was a different ending. These changes required nearly 60% of the animation to be scrapped and redone but the result is a much stronger film. Without Doris the villain isn’t really threatening but his attempts to use a frog and a T-Rex as minions is funny and the dinosaur chase is a great set piece.

These changes delayed completion of the film by over 10 months, which resulted in another complication for the film makers. The unusually long production time on an animated feature, anywhere from three to five years, means that your child voice actors have a tendency to grow up. The original voice actor for Lewis was Daniel Hansen but by the time the changes were being made his voice had broken, so another voice actor (Jordan Fry) was used for the newly animated scenes. It’s a credit to the filmmakers that this change in voice actor isn’t obvious during the actual film. The rest of the voice cast are made up of character actors rather than stars and in fact director Stephen Anderson provides a lot of the voices himself, including the ‘Bowler Hat Guy’.

Another side effect of the delay caused by Lasseter’s changes was that the film became chosen as the first Disney animated feature to be created specifically for release in Disney Digital 3D. Previously Disney had released Chicken Little in 3D but this was converted in post production using the same software that converted The Nightmare Before Christmas. Meet the Robinsons however would be designed specifically for 3D, with the animators actually creating the stereo images during production. Since the use of 3D was an integral part of the creation process, rather than an after thought, the 3D becomes an effective part of the storytelling process. For a film made reasonably early in the current 3D boom, the animators managed to remain reasonably restrained in their use of 3D effects, with negative parallax being used sparingly for effect. As a result the 3D in Meet the Robinsons is used to further the story rather than being used as a gimmick and thus creates an immersive and highly enjoyable 3D experience.

Apparently when the film was shown theatrically in 3D, the support feature was a 3D short with Chip and Dale called Working for Peanuts. This short was produced in 3D during one of the format’s previous periods of popularity in the 1950s. It would have been really great if Disney had managed to include this 3D short on the Blu-ray but sadly not. Here’s hoping that at some point Disney and the other studios release some of their 3D features from the 1950s and 1980s on 3D Blu-ray before this current craze dies out. The movie itself has a neat little joke at the science fair where you see a presentation on 3D movies called “Fad or Favourite”.

At its heart Meet The Robinsons is an enchanting tale about letting go of the past and looking to the future and thus becomes an affectionate tribute to the founder of the studio that bears his name. Throughout the film the characters continually use the phrase “keep moving forward” and it was taken from the quote at the top of this review, which also appears at the end of the film. There are some funny nods to Walt Disney’s vision of the future, especially his “Tomorrowland” theme park that appears during the scenes set in the future as “Todayland”. In the end, Meet the Robinsons is fun, inventive and entertaining, with its heart in the right place. Old Walt would have loved it.