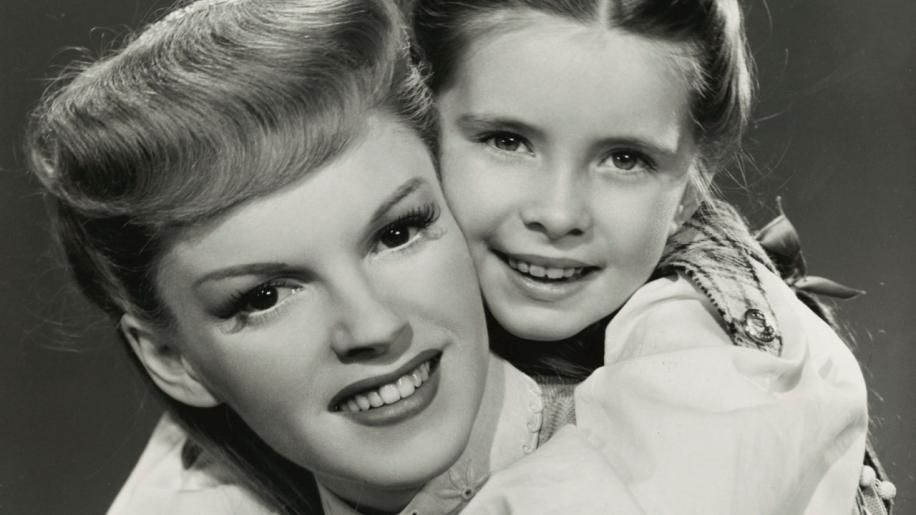 Taking a break from the current rash of summer blockbusters fetching up on the Blu-ray format, we turn our attention to a ‘real’ movie that was released way back in 1944. That hardy perennial ‘Meet Me in St Louis’ is the latest classic Hollywood musical to benefit from a digital restoration prior to its release on the High Def market.

Mention Judy Garland’s name and, for most people, it conjures up the image of Dorothy singing ‘Somewhere over the Rainbow’ in ‘The Wizard of Oz’, but ‘Meet Me in St. Louis’ was also responsible for several great numbers including the title song ‘Meet Me in St Louis, Louis’, ‘The Boy Next Door’, ‘Have Yourself a Merry Little Christmas’ and ‘The Trolley Song’ – which was nominated for a Best Original Song Oscar, but lost out to Bing Crosby with ‘Swinging on a Star’.

During the World War II years, most of the big studios produced ‘feel good’ movies that harked back to a time when there was no threat from a foreign foe. Looking at ‘St Louis’ now, those with case hardened hearts would probably call it sugary or even schmaltzy – but hey, there’s a place for such movies as they celebrate the nicer side of human emotion and behaviour.

It’s probably the only Blu-ray release with a good, old fashioned Christmas feel to it for this year and it’s also a movie that’s comfortable to watch in front of a roaring log fire with the snow falling outside. Ah well, we’ll just have to make do with the central heating and rain like stair rods.

For anyone who has yet to see it (where have you been and what on earth have you been doing to have missed it?) ‘Meet me in St Louis’ tells the tale of the rather well off Smith (how original) family back in 1903, who are looking forward to the forthcoming 1904 World Fair. The whole of the USA must have been looking forward to it as they composed a promotional song. We’re introduced to the song by a young, tomboy-ish Margaret O’Brien as Tootie who enters the house singing it early on in the movie and it’s then picked up by the Grandfather. While the song is catchy and ‘a good song’, it’ll be whirring around in most viewer’s minds for at least a month after watching the film.

We’re introduced to Esther (Ms Garland) who has designs on the ‘Boy Next Door’ John Truitt (Tom Drake) as does her sister Rose (Lucille Bremer). Life goes on in the Smith household where pressing matters like whether the home made tomato sauce needs a pinch of something or not to make it ‘just right’.

Their Father, Alonzo (Leon Ames), then drops a bombshell by announcing that a new job will mean the whole family must up sticks and move to New York – much to the displeasure of those who have not been consulted.

While Judy Garland’s singing is excellent and she’s beautifully photographed in ‘Glorious Technicolor’, the real star turns out to be the young Margaret O’Brien who won a special juvenile Oscar for her performance. She’s funny, terrified, gutsy and acts the ‘dying swan’ with real relish during her scenes.

But getting back to the ‘big Star’, Judy Garland famously didn’t want the part of Esther as it meant she’d be playing another teenager. At the ripe old age of 21 she felt that if she didn’t break away she’d continue to play teens for the rest of her career. Thankfully, she was persuaded to take the part and in so doing met her future husband, the director Vincente Minnelli. Minnelli’s name has become synonymous with MGM musicals ever since, yet ‘St Louis’ was a very early entry in his catalogue of features. Watching the movie now, it’s hard to believe that it isn’t the work of a time served director. Everything is so assured and it’s directed with great confidence.

Mind you, he did have an experienced team working with him that brought a lot to the party. Cinematographer George Folsey produced such beautifully lit Technicolor images that simply scream ‘Hollywood glamour’ at you – particularly the gorgeous close ups of the leading lady. No doubt he was ‘aided’ by Technicolor Colour Consultant Natalie Kalmus, wife of the process’ inventor Herbert Kalmus – who managed to upset almost every lighting cameraman in Hollywood, so much so that she was banished to the UK to run the Lab in West Drayton. They used to have pictures of her on the walls in her hideous hats – but I digress.

‘St Louis’ has a wonderfully charming, lightly comedic script written by Irving Brecher and Fred Finklehoff who display an excellent understanding of the human condition. In a movie almost devoid of plot, they manage to suck us into the Smith household with its immediately identifiable bickering, personality clashes and mood swings that affect most of the universal population.

The song writing talents of Hugh Martin and Ralph Blane inject the film with warmth, compassion and their work provides a stimulus that helps move the story along. Their musical numbers have all stood the test of time as they are still performed by artistes today for they have become musical standards.

It may seem that I’ve almost pushed aside the great Judy Garland here – or perhaps I was just saving the best till last. There’s no denying the on screen sparkle, the polish and the immense talent that makes us believe she is Esther Smith. Her comic timing is first rate. Just watch her expression as she’s being laced up in an old fashioned corset by her sister Rose. Her singing injects real feeling to the songs, whereas a lesser talented modern day artiste would be more worried about making their voice do ‘wiggly bits’ during a number.

Overall, ‘Meet Me in St Louis’ is a hugely enjoyable experience and we now get to see it in a form that looks and sounds better than it ever has before. Don’t forget to look out for the character of Lucille Ballard, played by none other than a young June Lockhart – more famously known as the ‘Mom’ in TV’s ‘Lost in Space’.

This is one for fans of Judy Garland and the MGM Musical.