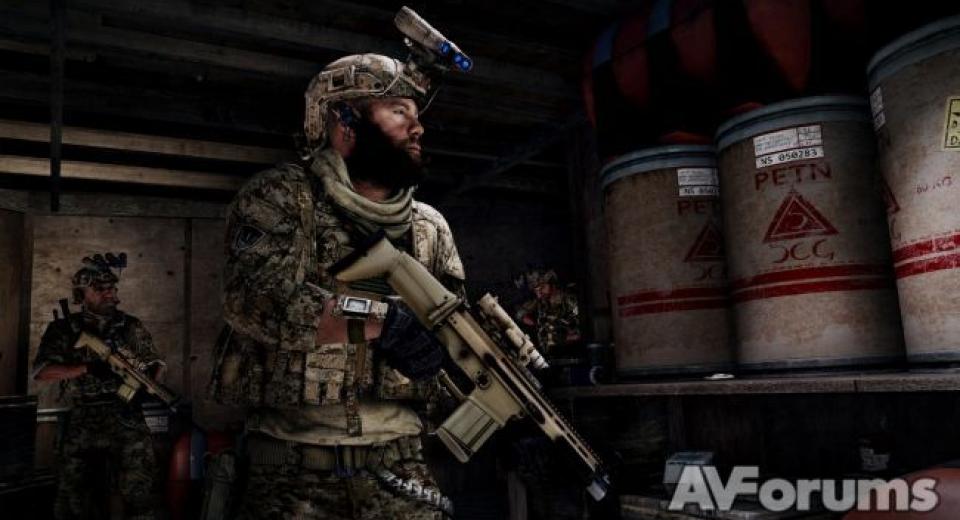 Back in its heyday (1999) Medal of Honor was a pretty big deal; with a story penned by Steven Spielberg himself and touting a distinguished military advisor it even had multiplayer character unlocks including William Shakespeare and a Jurassic Park velociraptor. A lot has changed in the following 13 year's, the series made the modern day jump in 2010's reboot and it takes its turn with the "Warfighter" subtitle in this years edition.

Dreamworks Interactive may have gone through a few rebrands as EA: Los Angeles and now the current sign above their door reading Danger Close, but they have remained the series developer in some shape of form since its inception. DICE provided the Frostbite engine for their multiplayer contribution to last year's effort but Danger Close now assume full control of all aspects having ditched the Unreal Engine in earnest using Frostbite for the whole package this time around. Medal Of Honor: Warfighter (MOH:W) promises to "let you experience the action as it might have taken place in the field" with a "personal story written by actual Tier 1 Operators while deployed overseas". I'll decode the first piece of military jargon for you for free; "Tier 1 Operators" are highly experienced teams which undertake secretive counter terrorism and special missions you wont find on the front of the papers anytime soon. For those into their military jargon, call signs and acronyms this title will scratch that itch till it bleeds, Preacher, Mother, Voodoo, PETN, DEVGRU and many more are cast into a thick web of story telling even those actually paying attention might find hard to follow.

It's certainly not winning any awards for originality; a human element is brought in with some CGI cut scenes which are intended to add some recurring themes throughout but in all honesty i still had to head on over to Wikipedia after the credits to get a handle on exactly what happened. You jump between several characters in the campaign; visiting locations around the world often in search of the elusive P.E.T.N, a highly volatile explosive which is at the top of every terrorist's shopping list. Being based on DICE's Frostbite 2 engine means that both visually and audibly the game is very impressive although again it's not breaking much new ground; the various environments are well realised backdrops to hit head shots in; and hit head shots you will.

If you wanted to make an ultra realistic shooter in an engine with a proven track record then it doesn't get much better than Frostbite 2, players of the Battlefield series will instantly feel at home, switch the controls scheme to "Battlefield" in the options menu and it plays almost identically. The only major difference is an added lean mechanic which allows you to stick to cover and peek out for shots but it's largely unnecessary and the gameplay rarely demands its use.

Being able to resupply your ammo at anytime from any AI team mate and secondary weapons having straight up unlimited ammo means the campaign won't pose a challenge on standard difficulty for anyone with an experienced index fingers. The campaign took a little over 5 hours before playing the Linkin Park song over the credits.

In a pleasant surprise Need For Speed developer Black Box were brought in to co-create some driving missions which along with the obligatory turret sequences offer a welcome change in the action and are the closest thing to bringing something new to the standard FPS formula, still when the most interesting thing about your shooter is its driving levels then it's probably not a good thing. The missions are genuinely fun with some Hot Pursuit mechanics wholesale implemented in some lengthy first person driving missions.

Minus those diversions MOH:W left me feeling pretty cold by the time the credits rolled, it has good intentions by trying to focus more on the individual human stories it contains but ultimately it's using all of the devices we have come to expect, executing them well but not with any improvement or flair worth noting. Since multiplayer comes on the first disc of a pair it's safe to assume the focus of the package is multiplayer, more Frostbite 2 benefits rear their head with the Battlefield deja vu feeling continuing throughout.

The core game handles much the same as its Frostbite 2 powered cousin; but the maps have dialled back the scale in favour of fast paced infantry based action. The squad mechanic has been broken down into "fire teams" of two who can resupply and heal each other, classes have inherent strengths and weaknesses such as the Demolitions class being the slowest but far more resistant to explosives or the Assault class being more nimble and dealing more weapon damage. Perks and equipment variations are interestingly tied into a country choice, each class can belong to different nations from the British SAS through to the Polish GROM and all in between. This changes the equipment and perks available for use and provides a whole new system of unlocks to work through for each class. Support Actions provide the real time rewards for score chains (kill streaks) which can be either offensive or defensive, you might choose to drop a targeted mortar strike or instead call in a UAV for a limited period, the support actions again differ between classes with all classes topping out at the Tier 4 Apache helicopter.

Everything else you have come to expect is present, the detailed weapon customisation, Battlelog powered Platoons to allow you to play with a group of friends and compare every conceivable element of the game with through the extensive stat tracking. The presentation of it all takes some getting used to, not only is the in game HUD constantly cluttered but if there were an award for the most menus on a screen at once the MOH:W multiplayer menus would win hands down. Finding your way around the system is doable but it's certainly a less refined experience than it should be.

It is almost inconceivable that there isn't anybody playing this game who doesn't know what they are getting into, if you have played a miltary based first person shooter in the last 5 years you will have seen 90% of what this title has to offer. If you played Battlefield 3 and prefer exclusively the close quarters maps then this is what you have been waiting for. Everyone else should expect the standard package with some slight variations on common elements implemented in the same buisness-as-usual fashion.When is comes down to it there is nothing new enough on offer here that provides enough of an incentive to start the rank and xp cycle all over again. That's not to say the game isn't fun; it's just that it's probably the same fun you are alreadly having with your current shooter of choice.