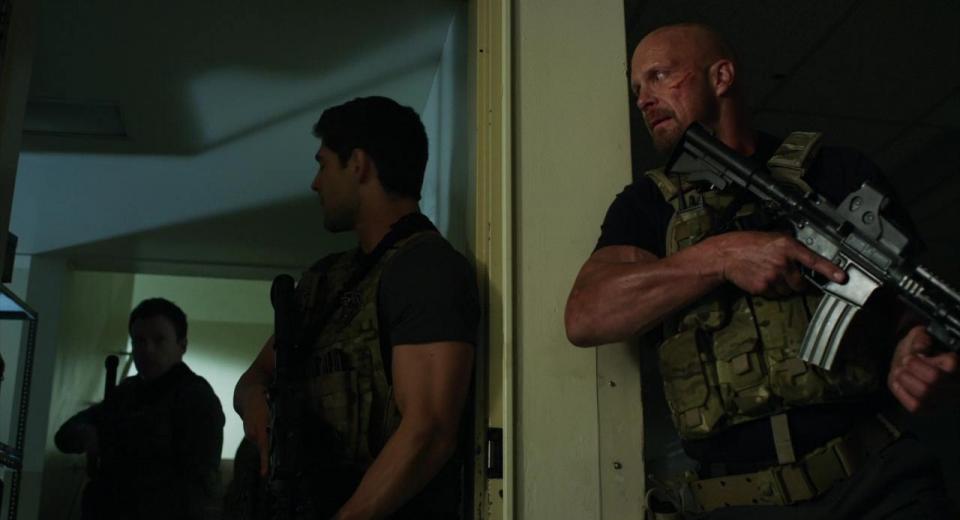 Despite the evident low budget of the piece; the limited prison interiors setting (with a couple of prison exterior shots); the blue-green dominated ‘darkened’ stylisation; and the debatable merits of the material itself, the actual video presentation is pretty impressive. It would be hard to fully endorse this as a perfect demo quality release, but it doesn’t fall too far short either, and thus an argument could be made that it achieves reference quality in enough elements to warrant a suitably high score.

Anchor Bay’s 1080p MPEG-4 AVC High Definition presentation offers excellent detail throughout, promoting skin textures, intricate background touches, fantastic fine object detail and basically all of the little nuances that you would expect from a considerably more mainstream release. From Seagal’s all-too-perfect-looking widow’s peak, to the perma-frown on Austin’s brow; from the every little detail on the various different weapons to deployed to the clothing weaves on the tactical gear that the individuals wear – even the longer scene-establishing shots allow for some impressive environmental detail. All of this without any telltale signs of edge enhancement, abhorrent excessive DNR, unintentional noise or other digital defects.

The colour scheme is extremely limited – as is dictated by the budget, setup and style of the piece. You’re looking at a dark, often low-lit, interior-set piece that boasts next to no vibrant or vivid colours. Dark blues infused with sickly greens, grey and blacks all compete for dominance, but none of this is the fault of the transfer, nor is there any problem with the way in which the transfer deals with it. Perhaps black levels don’t come across with utterly untarnished integrity, but certainly the detail level even in the darker sequences impresses, and overall this is a presentation that’s hard to fault. The accompanying Dolby TrueHD 5.1 track is also fairly impressive, although certainly not demo quality material, not least because of the incessant, irritating score that dominates a great deal of the proceedings (although this seems to be intentional). Still dialogue comes across clearly and coherently – even the mumbles from Seagal himself, who appears to have provided 99% of his own dialogue (certainly a first in over a decade) – largely from across the frontal array. Indeed, there is some front dominance here, although the effects truly hit home in all of the numerous action sequences – coming at you strong and fast from the fronts, whilst steering fairly precisely across the surrounds where appropriate. Bullets shoot around thunderously; shotgun shells shred the surroundings; and explosions threaten to perforate your eardrums, accompanied by a fair wallop of LFE input. Indeed if it weren’t for the staggeringly monotonous and overbearing score – which actually takes away from your enjoyment of the film – this could have been almost as impressive as the video. Surprisingly, for such a relatively low budget release, Maximum Conviction comes sporting a fair few extras, not least an Audio Commentary from the Director and Producer.

Director/Executive Producer Keoni Waxman and Co-Executive Producer Binh Dang provide this running commentary, which should appeal to all those who enjoy the movie, all those who enjoy any of Seagal’s recent work (as Waxman has directed a fair amount of it) and also any budding filmmaker interested in making the most out of a very limited budget. Certainly that’s the big pull on this track, which reveals the tricks and nuances of cutting costs and making a professional-looking low budget actioner like this, whilst throwing up the usual trivia about casting, locations, limited effects, stunts and fight sequences. Putting the two Steves together is also a key topic, although it’s a shame we don’t get to hear from at least one of them – Seagal’s a notorious diva when it comes to avoiding special features; one of those actors who gives the impression that he thinks he’s ‘above’ them – and instead get lumbered with another regular Seagal producer, however much he also has to contribute.

Behind the Scenes runs at 10 minutes and offers a more action-oriented look at the making of the movie, with the cast and crew talking about the story, the teaming-up of the two Steves, and what they brought to the mix – particularly in terms of the (gun)fight sequences.

Steve Austin is a very brief 2 minutes with one of the Steves, discussing his background in wrestling, his experiences on films, and working with Seagal.

Icons spends a further 2 minutes looking specifically at the pairing up of the two Steves, which clearly marks a big selling-point to the producers of this feature.

Bren Foster rounds out the mini-Featurettes with an 80-second look at one of the martial arts-trained supporting cast members, who gets a brief moment to shine in the movie.

There are also some Steve Austin-dominated Previews on disc startup. Well I certainly had assumed this to be far worse than it actually ended up being. Anybody who has been a fan of ageing aikido action star Steven Seagal through thick and thin should know just how bad things can get in terms of his abundant Straight-to-DVD output. If you are only aware of his fairly decent 90s efforts then you should steer clear of this film, but if you go into this with your eyes open then you should actually be pleasantly surprised.

Speaking his own dialogue; doing his own fight sequences – these are simple things that you’d think should only be expected of an action star of any standing, but with Seagal they’ve become something of a rarity, and so fans should rejoice in the fact that Maximum Conviction marks a step up in terms of his professional output. Whether or not Steve Austin’s followers will be excited to see the ex-WWE beast partner up with Seagal is another thing, but the pairing does tend to bring out the best in both of them, and Maximum Conviction may not be able to compete with even the big boys in the little league that it swims in (Straight-to-DVD films), but it’s far from the worst thing that either of these two action relics have done in their careers and, for some, that will be more than enough to put it on their purchase list.

On Region A-locked US Blu-ray (there’s also a March 2013 UK Region B-friendly release for those who so require) comes sporting surprisingly good video and audio, as well as a nice selection of extras. It’s certainly had a fair amount of effort put into it, which makes for a nice surprise for this kind of low budget production. Fans of Seagal and Austin – as stated, through the good and the bad – will certainly find it hard to resist picking this up and, with suitably wary expectations, should be pleasantly surprised by this simple but effective little feature.