At his lowest, he's at his best. 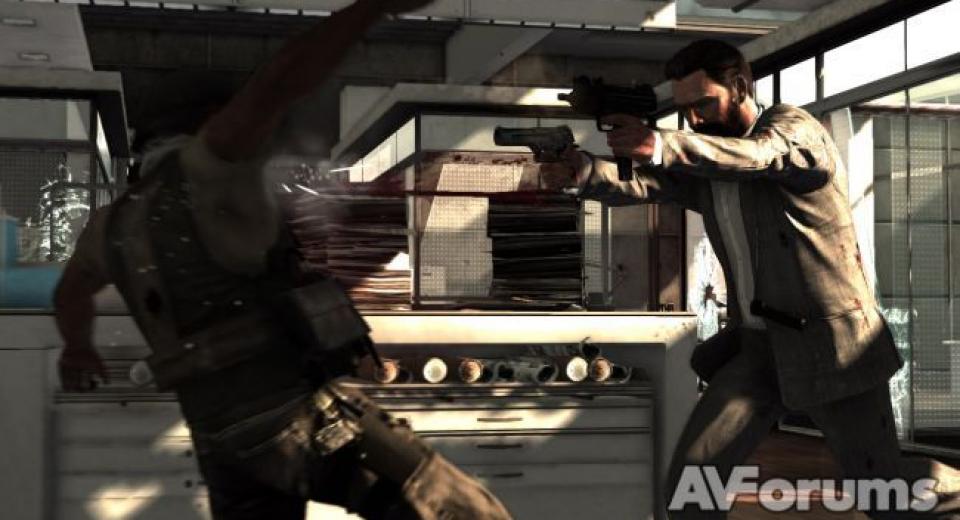 The cynics among you might be concerned that Max Payne 3 is just another gimmicky third person shooter seeking to exploit a dormant franchise with a loyal following. What could it possibly have to offer the current generation? After all, the series' trademark slow-motion mechanic has lost all sense of originality at this point, right? It's been done to death by the Matrix games, F.E.A.R., Stranglehold, even Fallout's V.A.T.S.... the list goes on and on.

And where they've succeeded before, Rockstar succeed again: Max Payne 3 is a blast. It's not that it's particularly groundbreaking - it isn't - but there are key elements that should become reference points for how games with similar ambitions are developed in future. A lot has changed for Max Payne since last we saw him. He has left the police force and taken on a private security gig, working for Rodrigo Branco, a real estate mogul in São Paulo. He's even upgraded his wardrobe - but his cheery Hawaiian shirt has done nothing for his disposition: Max's life is spiralling dangerously out of control, he's as riddled with alcohol and painkillers as he is with guilt and regret. Raul Passos, the man who landed him the bodyguarding work in Brazil, is the closest he has to a friend. But even in Passos' company Max is melancholy and withdrawn.

It takes no time at all for all hell to break loose. Within the first couple of hours of gameplay there are multiple attempts to kidnap and/or assassinate members of the Branco family. From there the plot rattles along well enough; it is predictably unpredictable in its twists and turns, occasionally losing its way but ultimately culminating in a quietly satisfying final moment.

James McCaffrey returns to voice the eponymous hero and delivers a sterling performance of a mediocre script - one that ostensibly hits many of the right notes but lacks any real depth. But there is enough in the performance for the player to feel involved in Max's pain (couldn't resist), and his personal story is the thread that holds the whole narrative together.

Supporting characters aren't nearly as well fleshed out, although on paper they show a lot of potential. Passos is eminently likeable and his supportive relationship with Max is a highlight, particularly early on. The Branco family are walking clichés, none more so than Rodrigo's youngest brother Marcelo, a cowardly airheaded playboy whose arc becomes slightly more interesting as the game wears on but lacks sufficient development to be particularly memorable. There's a feeble portrayal of women across the board (surprise surprise).

One consequence of moving the game's setting from New York to São Paulo is a dramatic change in colour palette, which along with the excessively stylised visuals are sure to split opinion. Bright flashes and distortion effects are used heavily during cut-scenes, perhaps to represent Max's booze and drug-addled brain's view of the world, or perhaps because someone at Rockstar thought it looked cool. Either way, there are times when it's overdone.

There are also bound to be complaints about the number of cinematic sequences, but attentive players will notice that there's not a single loading screen in-game. Rockstar have cleverly used cut-scenes to mask loading, but some may feel that it gives the impression control is being wrested from the player slightly too often. Given all the changes, it's reassuring to know that controlling Max in this game is eerily similar to controlling Max in the previous titles. Bullet-time and bulletdodge return with only slight tweaks. Bullet-time slows enemies' movements down to a crawl enabling Max to pick them off easily. Bulletdodge causes Max to dive to the ground while triggering the same slow-motion effect. It's not as practical as bullet-time but there are occasions when using it is irresistible. A section of the game that sees Max in a gunfight in a São Paulo football stadium presents an opportunity to dive down some stairs in slow motion while taking out enemies on both sides. Few will be able to refrain, even when it becomes apparent it's easier to walk down cautiously.

Some additions have been made to the gunplay. Most notably, Rockstar have implemented a superb cover mechanic. Unlike many other third person shooters, there's no reliance on cover; rather, it provides a momentary breather from the bullet-time run-and-gun antics that dominate the gameplay.

The other change is more cosmetic. When the final enemy of an area is cleared, the lethal shot is followed to its target via a bullet-cam. Again, it's hardly original (in fact it's not even the only game this month to use the effect) but it adds a layer of guilty satisfaction to completing a difficult section. Better still, once the shot connects, you're free to pump more rounds into your victim as they go down in super slow-mo.

On the whole then, Max Payne 3's gunplay is as good as any other third person shooter on the market and Euphoria, the animation engine, deserves a good deal of the credit. The beauty is in the detail. The way Max tucks a two-handed weapon under his arm so both hands are free to reload a pistol; the way lifeless goons tumble over railings, down stairs, or onto objects; the way enemies react with surprise and momentary hesitation when one of their number is unexpectedly shot in the head mid-conversation. Euphoria looked great in Red Dead Redemption, but in Max Payne 3 it's in a different class. The character animation on display here is quite simply unrivalled.

The artificial intelligence of the enemies is also extremely well-adjusted. They make smart use of cover, but are disposed to being aggressive and will tend to move when it's possible to do so. The AI really shines in wider spaces, where a combination of well-timed head-on assault and sneaky flanking keeps Max on his toes.

Fans of the previous games will be relieved to learn that there is still no automatic health regeneration. In a tidy dove-tailing of mechanics and plot, Max takes painkillers to restore health, meaning that to heal he has to rely on one of the substances to which he is addicted. Max's voiceover often acknowledges this when pills are collected, and it's a nice cohesive touch.

The combination of large numbers of enemies, smart AI and limited health supplies results in a game that's as unforgiving as it is polished. On harder difficulties, especially on free aim mode (no auto-targeting) it can be monstrously difficult in places. But Max is so responsive, and the shooting is so satisfying, that it never feels like too much of a slog. Uneven checkpointing can frustrate at times but it's certainly not a deal breaker.

At 10 hours or so Max Payne 3 doesn't outstay its welcome, but gameplay does eventually become a little repetitive. Rockstar make an attempt to break up the "run into a room, clear the room, run into the next room" formula with a number of on-rails sequences, but with limited success. Compared with the freedom to run and gun offered throughout the rest of the game, these sections feel restricted and drawn out.

There are also a couple of half-arsed boss fights thrown in, which are about as fitting as Deus Ex: Human Revolution's (i.e. not fitting at all). I'll avoid spoilers, but suffice it to say the last boss is a bit of a shambles. From a design point of view the battle undermines almost everything the player has learned about using Max effectively throughout the campaign.

But in the scheme of things, a couple of dodgy boss fights and some unnecessary on-rails sections are minor quibbles with an otherwise exemplary single player campaign. Red Dead Redemption and the previous Grand Theft Auto title both had multiplayer, and Max Payne 3 follows in their footsteps. There's fast becoming a certain feel to Rockstar's multiplayer games, and with this iteration there's finally a sense of how good their formula can be.

In terms of modes, the usual Deathmatches and Team Deathmatches are present and correct. In addition there's the Payne Killer game type, which is a "VIP" mode where one player takes the role of Max and another takes Passos - both of whom are slightly overpowered. All the other players team up to take them down. Kill a VIP, and you'll immediately respawn as that character.

Gang Wars is an attempt to bring story into the multiplayer arena. Five linked matches are played in a variety of modes. Points earned in the first four games affect the balancing of the final Team Deathmatch, so if you do well early on the odds will be in your team's favour at the end. It's a lot of fun.

Loadouts are impacted not just by weapon choice but by the weight of the armaments you choose to carry. Over-burden your character and they will run and recover more slowly. There's a plethora of guns, armour and boosts (perks) to unlock, and careful loadout management is key to multiplayer success.

It's worth mentioning that Rockstar have achieved the inconceivable by incorporating a working bullet-time system into an adversarial multiplayer environment. Essentially, if a character enters bullet-time, everyone they can see and everyone who can see them is sucked in, too. The other players on the map are unaffected. It sounds like it shouldn't work, but it does.

There aren't many third person shooters these days that can truly raise eyebrows. Although there is much here that has been seen before, Max Payne 3 has a certain freshness and polish that makes it exhilarating and captivating to play. The stellar animation, the rich and lively settings, the solid and satisfying gunplay all raise this game above its predecessors and above most of its competition. And once you've seen the campaign through, the multiplayer will keep you coming back for more. Bravo Rockstar.

Set against Max Payne 3's strengths, any gripes in this review are little more than quibbles; this is Rockstar at their best. The gunplay is weighty yet responsive, enhanced by aggressive artificial intelligence and some of the best character animations ever seen. The multiplayer builds on the foundations laid by GTA / RDR and is much more than the tacked-on afterthought players might have feared. A truly great game.