Master And Commander: The Far Side Of The World : Two-Disc Special Edition DVD Review 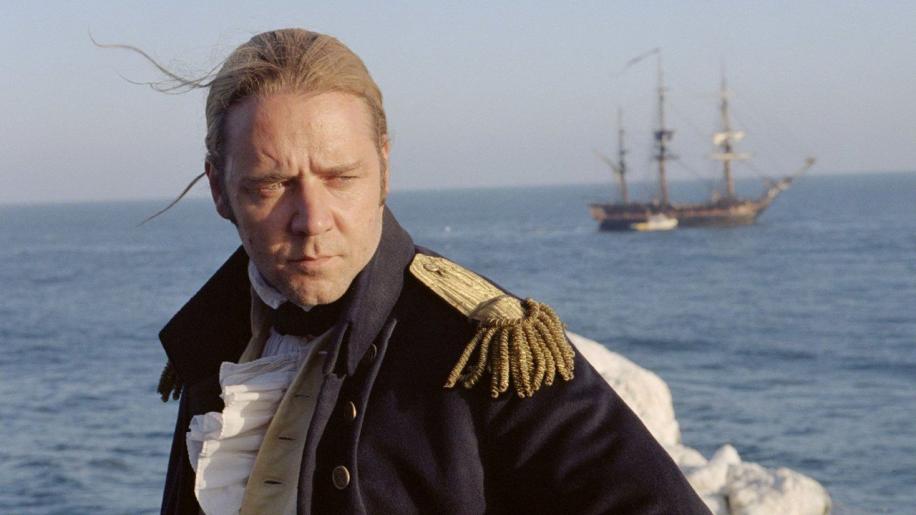 Presented in anamorphic widescreen and framed at 2.35:1, the transfer here is a mixed bag. The opening scenes exhibit some unwanted artefacting and significant graininess, which becomes especially apparent when we see fog and clouds - in the scene where the bow of the Surprise appears out of the fog, the compression problems are particularly noticeable; this was the case on both our 110” large review screen and a 28” widescreen television.

Thankfully though, things do improve somewhat, and for the large part we are treated to a cinematic transfer with deep, revealing blacks and excellent colour saturation. The tone is very subdued, with an almost monochromatic feel to some of the night/stormy scenes, but the colours hold up very well looking authentic and natural. Edge enhancement is largely absent, with the difficult scenes containing shots of the complex rigging passing all except the most critical eye (and certainly it's a huge improvement over the terrible haloing seen in this area on the recently reviewed Japanese edition of Cutthroat Island).

The detail level is generally good, with the ship's exterior and interior looking fantastic for the most part - in the opening moments when the camera pans over the two cannon, the fine weave of the ropes almost leap out of the darkness at us, however a hint of softness can be detected in long-distance shots: in particular where we are treated to the heady vistas of the Galapagos islands, the image is not as sharp as one would expect.

Overall this is a reasonable transfer but disappointing given the age of the movie - I've barely mentioned grain but it is present, and makes some of the problems even more apparent; however it's worth noting that grain was prevalent in the theatrical print of Master and Commander.

A mixture of average and good then, which means the cannon ball is slightly wide of the mark on video...

If there's one thing to look forward to in this movie, it is without doubt the sound. Treated to both Dolby Digital 5.1 and DTS flavours - and I'll say now there's little between them - we have here a reference quality workout for any system.

Right from the opening scenes, the sound wraps the viewer up in an enveloping, layered and truly cinematic experience. From the creaking of the ship's hull, to the slapping of the waves, to the snoring of men in their hammocks, this is a mix that will have you looking over your shoulders. The sound presence is subtle yet incredibly effective, and this is built upon by clean and crisp dialogue which remains largely locked to the centre channel. When we see the first betraying flash of cannon through the fog in these opening moments, the swing in dynamics is truly breathtaking with razor sharp steering and effects placement, and an immense deep bass kick which - given suitable equipment - will be rattling all things, including yourself, in the room.

The attention to detail on the sound is sublime, and through the first battle this builds and builds, so we hear every wince-inducing impact of cannon, every splinter of wood, every shout and cry, every gout of water spray as a shot explodes off the bow - this is an audio assault from all four corners of the room. Yes, it really is that good.

From thereon in, the sound mix maintains this level of quality. Though not always full of the floor-shaking blast of cannon-fire - indeed the action is restrained for the most part - this is always an enveloping surround experience, with fantastic ambient spot effects which really place you on the ship with the crew.

The mid-range possesses real punch, the bass an unbelievable response which plummets down to well below 20hz, and the highs remain composed and detailed with no hint of sibilance, which is essential for all the fine detail that's there to hear.

A top soundtrack, then, and I guarantee the opening explosive sequence will become a regular feature in many home demos in the near future.

With only a short promotional extra on disc 1 for the upcoming production “I, Robot” (running for 2 minutes) and a host of trailers for Fox movies, the majority of the additional content is to be found on disc 2.

First up, and running for just over an hour is an extensive documentary - “The Hundred Days” - Making of Featurette. This alone is a fascinating insight into the production of Master and Commander, and it takes us from the early stages of set (and ship) construction through to casting and the physical filming. Containing an immense amount of fascinating footage from the production archives, this is not to be missed.

Continuing the trend, Peter Weir shows himself to be an engaging and interesting character in his “In The Wake of O'Brian” documentary, where he explains how he went about preparing for the daunting task of writing the script, including a trip on Endeavor, a live mock ship where he spent some time learning how to become a seaman himself, and spending a fortune in an antiques shop in London on equipment from the era. With a down to earth delivery and displaying a real passion and commitment to the project, this again makes for excellent viewing.

Next up we have an interesting look at the special effects work (and there's a familiar face here from the Lord Of The Rings extras), and the combination of miniature and CGI work, which is backed up by a fascinating look into the sound design of the movie. This documentary shows us how all of the sounds were pulled together for the final movie, including a lot of detailed information on the cannons and how the sounds for the subwoofer channels were generated: we learn amongst other things that the subwoofer information actually came from microphones placed a long way away from the cannons, as up close the sounds were much “snappier” than booming. Also included is an excellent interactive demonstration where the viewer can select which microphone to listen to for a single cannon shot, from a choice of seven, and finally how all the sounds were mixed together. Excellent stuff.

Rounding up the documentaries package is a HBO First Look special, which in all honesty doesn't cover any new ground as the preceeding material covers most bases - it's also slightly more promotional in tone, but still a worthwhile watch.

Next up are a selection of 6 deleted scenes, a section on shooting with multi-cameras and multiple angles which includes split screen playback and use of the angle function, and finally we have a selection of stills galleries to round off the package.

Overall this is a quality presentation. Little in the way of promotional puff gets in the way of extensive, professional material that makes for an enjoyable viewing session. Some may lament the absence of a director's commentary, but when the documentaries are this good...who honestly needs it?

A simple tale told well, this DVD package comes packed with a stunning soundtrack, and excellent choice of extras and is only let slightly down by the inconsistent video transfer.