It's a man's film from what arguably was a man's world 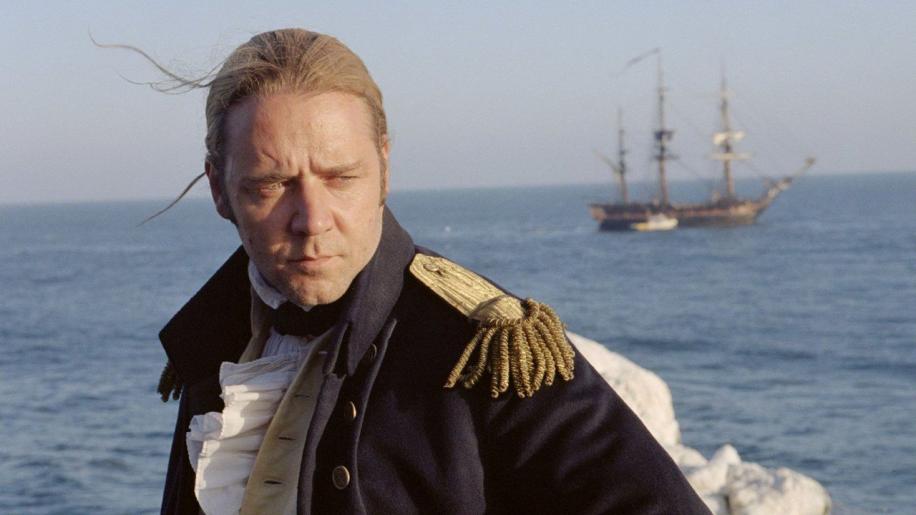 Peter Weir has an illustrious career, from the early bizarre Cars that Ate Paris and the wonderfully shot haunting Picnic at Hanging Rock to Witness, Dead Poets Society and of course The Truman Show which showed if nothing else that given a good script and excellent direction Jim Carey could be more than a one horse town.

In 2003 he embarked on what would be, for some at least, his finest work; Master and Commander: Far Side of the World. This indeed has been his last film to date, with a couple currently in early pre-production, was his last offering truly his pinnacle ?

Set during the Napoleonic wars of the early 19th century Russell Crowe picks up the mantle of Captain Jack Aubrey, master and commander of HMS Surprise. They are in pursuit of and have orders to sink or take the French privateer Acheron. After an initial skirmish laden in heavy fog 'Lucky' Jack as he has come to be known makes good his escape without even leaving a scratch on the French ship's hull.

A game of cat and mouse develops with the French Captain getting the better of the HMS Surprise time and again. Putting to calmer waters to refit it becomes apparent that 'Lucky' Jack is torn between following his orders and following the needs of his crew. His erstwhile crew are naturally restless, battling calmed seas, the storms at The Horn and a potential Jonah on board; Jack knows a fine ship is only run by a fine crew and a disastrous shot into the belly of the onboard naturalist and doctor gives Jack the excuse to find land and recuperate his ailing friend and surgeon (Paul Bettany), himself, his crew and his resolve.

If the wind didn't power the HMS Surprise's sails then you could have sworn that it was powered by testosterone. It's a man's film from what arguably was a man's world. On-board we see the men gelling together to form a close-knit social group aware that everyone's well being rests upon the shoulders of those standing next to you. At the head of this group is of course Russell Crowe as the valiant Captain. For me this is the role that Crowe was made for. He was of course brilliant in the often underrated A Beautiful Mind and his Gladiator needs no further inspection here or elsewhere; but for me this role is defining. He understands, as does the author, that leadership comes not from lording over your fellow souls but to be part of them, to integrate with them, to pull with the best when needed and to steer the group with a passion. Crowe displays this leadership quality, from the commanding performances on deck, his astute tactical knowledge, his leadership into battle at the forefront of the mêlée. It's not all brain and balls though, his character feels for his crew like family and this is why they respect him so much; from the anguish shown on his face when a young crewman is injured to when he has to forego his prize to save a long time friend and colleague.

Other performances merely bounce off Crowe's and in themselves are a perfect match for his larger than life Captain. Paul Bettany come across as the moral or sometimes social aspect of Aubrey's character, constantly reminding him of his duties not only to country but also to himself and those around him. They work perfectly together. It is this intertwining of Aubrey's commitment to country and his commitment to crew that allows us to see other parts of Aubrey's character and the true man which he is. Sundry performers are Max Pirkis showing a talent far beyond his young years, Billy Boyd as the superstitious yet loyal Coxswain and Lee Ingleby who's a tormented soul doing his best to fit in, be one of the boys; yet his aloofness restricts him from becoming one.

Production values are immense with a true sense of claustrophobia coming about because of the tight confines below deck; you can almost smell the sweat, camaraderie and at times fear. Above deck is no different with some of the best sea sequences ever put to celluloid. The beautiful becalmed waters, the intertwining rigging, the swell as they venture to The Horn and of course those thunderous, savagely brutal battle scenes. The battle scenes themselves cannot be faulted, whether they be ship to ship of face to face, a true sense of sheer brutality and at time futility definitely comes across.

But it's not because of the battle scenes that ultimately this film works as it does. It's the whole mix of the film, from the initial hunt, the interaction between the crewmembers - their highs and at times their all too many lows and the relationship between two men on this mission which would take them from loved ones and friends.

Peter Weir has always examined the multi faced nature of the human spirit; especially with The Truman Show and Dead Poets Society and here again we see him plying his trade with Captain Jack Aubrey and Dr. Stephen Maturin; and again more than successful in delivering characters to the screen which are multi layered and have actual reason for every action they take. The battle scenes are just icing on an already rich cake.