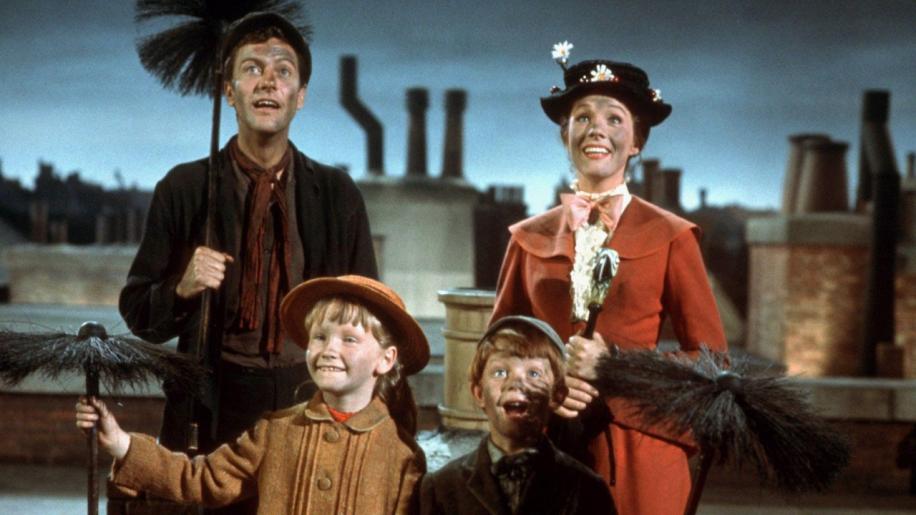 Mary Poppins: 40th Anniversary Edition. Wow, that means I was all of two years old when the movie was made! This is one of those films that I've seen about fifty times, but always in dribs and drabs and never all the way through... until now. And when I did catch glimpses of it in the dim, distant past of my ever-receding youth, I never really enjoyed Ms. Andrews, Dick Van Dyke and the whole silly story. How I've changed! Watching this wonderful movie on a large screen, through the eyes of a father but with the heart of a child, I now fully appreciate this superbly entertaining, simple, yet cleverly symbolic story.

Set around the turn of the last century our favourite Nanny is required to cast her magic over the Banks' household. George W. Banks (David Tomlinson), a banker, and his wife, Winifred Banks (Glynis Johns) have little time for their children, and when their Nanny has enough of the little imps the Banks find themselves in need of a replacement... and quick. Cue Mary Poppins, the quintessential mother/father figure all rolled into one - firm, fair and fun. With some help from chimney sweep Bert (Dick Van Dyke) Poppins gradually manages to mould the stiff upper-lipped Mr. Banks into the caring and doting father he always meant to be. Along the way there are many beautifully crafted set pieces and dance sequences, as well as an appearance by the Mad Hatter himself Mr. Ed Wynn, who plays laughaholic Uncle Albert. You see, although the message seems to be - have fun and enjoy life, too much of a good thing can also be bad for you! The 2 - Disc set itself is housed in a very nice silver coloured outer slipcase, with a front flap held down with a bit of Velcro - a la the recent releases of The Lion King, Aladdin and Alice In Wonderland - and fits in perfectly with any DVD collector's ever increasing Disney catalogue.