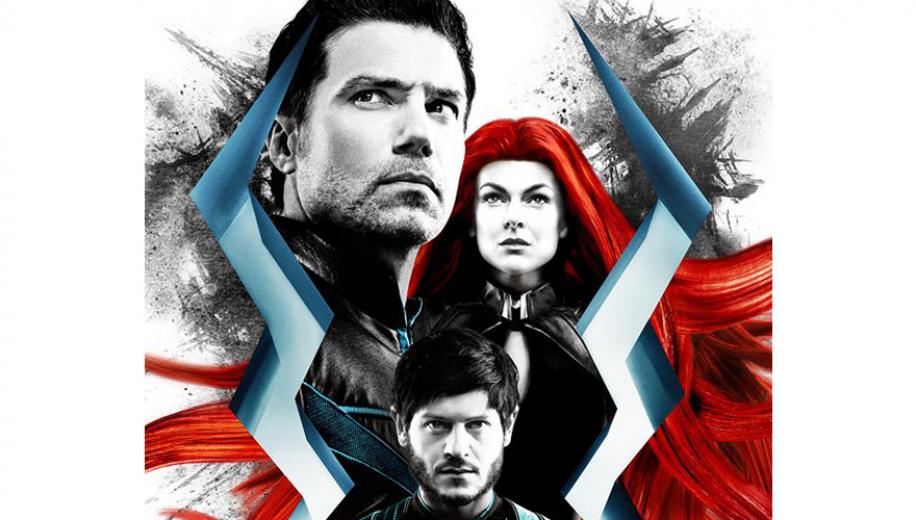 Television has come a long, long way over the past 10 years.

These days high profile movie stars and directors have become more and more involved in this ever expanding and developing medium. And now for the first time ever we have a new TV series with the first two episodes shot entirely with IMAX cameras. Marvel’s Inhumans will be brought to life by IMAX Corp, Marvel Television and Disney|ABC and, for the first timer ever, the first two episodes will debut exclusively in IMAX cinemas for two weeks at the start of September before being available on television and streaming outlets worldwide. These first two episodes were directed by Roel Reiné a self confessed geek, with his very own movie theatre at home with a 3x2 metre screen, 12 seats and Dolby 7.1 surround sound. Reiné is a huge fan of quality, resolution and plenty of detail because, as he said, he eats, drinks and sleeps movies. That said, he isn't a fan of 4K LED LCD TVs, which he feels make the image look flat.

When asked why Marvel decided to shoot the first two episodes of Inhumans using IMAX cameras, Reiné talked about how it was a combination of what both Marvel and IMAX wanted to do. He went on to explain how for IMAX it was a way to get interesting content in their theatres during a time when there were no big blockbusters being released. Whereas for Marvel this is the next chapter in their expanding TV world and this was seen as a way to bring TV to a big audience through a cinematic experience. Working within the Marvel Cinematic Universe was both liberating and restrictive for Reiné who was under Marvel’s watchful eye throughout the whole process ensuring that everything Reiné wanted to do was thoroughly checked against all the other films, TV series, comics and even toys! But despite the rigorous attention to detail Reiné said that he found the entire experience to be a nice and enjoyable collaboration. Inhumans revolves around a race of superhumans who were exposed to the Terrigen Mist giving them each various different powers which in turn dictates their position within their society — the better the power the higher up the hierarchy you are. The Inhumans live in Attilan a city on the on the far side of the moon, and are led by the Royal Family, headed up by their king Black Bolt (Anson Mount) whose voice is incredibly powerful, so much so that he must remain silent communicating only through a sign language that Mount created himself - with the help of a sign language specialist - and learnt. Queen and wife to Black Bolt is Medusa (Serinda Swan) who as the name suggests has powerful hair that she can control just like any other appendage.

Challenging Black Bolt’s leadership and instigator of a military coup is Maximus (Iwan Rheon) Black Bolt’s brother who also has a yearning to be king. Other main characters include Karnak (Ken Leung) who has the ability to see the fault in all things, Gorgon (Eme Ikwuakor) who possesses incredibly strong legs, Crystal (Isabelle Cornish) who can control all four elements, Triton (Mike Moh) who has the ability to live underwater and Lockjaw – a 2,000lb dog with the power to teleport and the first fully CG character in television history.

The Inhumans debuted way back in 1965 in a Fantastic Four comic and have therefore definitely got roots within Marvel universe. However, Reiné was reluctant to divulge any information on exactly how the Inhumans fit within the MCU - silenced by Marvel no doubt! But he did allude to some connections within the wider MCU - for example replicating the Terrigen Mist process seen in Agents of S.H.I.E.L.D. Reiné did disclose that he’d hidden lots of easter eggs within his two episodes, for example the language used by the Kree and their iconography was used in the set design. Reiné used three Arri Alexa IMAX 65 cameras to shoot the first two episodes of Marvel’s Inhumans, the same cameras that were used by Joe and Anthony Russo in Marvel’s Captain America: Civil War and will go on to be used for the entirety of Avengers: Infinity War and its as-yet-untitled sequel. These cameras produce razor sharp imagery whilst also delivering exceptionally fine detail, vibrant colours and a higher dynamic range for superior contrast ratios. All these incredible features along with an amazing 600 VFX shots can be witnessed in the first two episodes — which look both beautiful and awesome. Remarkably Reiné felt that the IMAX camera lenses were not wide enough so a special lens was custom built in London which rehoused a Canon lens to an IMAX lens to allow an even wider shot when he was shooting at low angles, of which there are a lot.

The main differences that Reiné was faced with when shooting in IMAX compared to normal digital cameras or 35mm was realising the scope was higher instead of wider. So Reiné had to take this into considering while shooting and was able to choose downtown locations in Hawaii that had the highest buildings because he knew that he would have that height in the IMAX theatres. A big challenge for Reiné was shooting his two episodes in IMAX on a TV budget, which also had to be completed in a 20 day TV schedule. But Reiné’s experience shooting low budget action films on a tight budget as well as in a short amount of time helped during the planning process where all the big, creative decisions were made in pre-production, so when it came to shooting everything went as smoothly as possible and enabled him to focus more on the acting and performances of his cast. I had the privilege of seeing four scenes that had been completed, taken from the first two episodes shown on an IMAX screen in London. The first scene was taken from the opening of the first episode in which Triton is on Earth searching for other Inhumans. Shot on location in Hawaii this scene made the absolute most of the jungle backdrop. The IMAX cameras fully utilised the location making use of slow motion to demonstrate the capabilities of these cameras, making the most mundane of things such as rain drops look like glistening diamonds cascading from the sky. Similarly, running through muddy puddles have never looked so wonderful!

The second scene was a dining scene, where Reiné took inspiration from The Grand Master (Wong Kar-Wai) when shooting. Reiné used a lot of extreme close ups to get up close and personal with each of the characters as they each sat around the dinner table, which is especially significant when it comes to Black Bolt who relies on facial expression for a lot of his communication. This scene showed the Royal Family sitting down to dinner for the last time before they all split up and things take a turn for the worse.

We also had the chance to see Medusa’s hair in action in the third scene with Maximus. Medusa’s hair had previously come under some scrutiny and criticism from fans after an early trailer showed Swan’s wig looking limp and lifeless - nothing like the character depicted in the comics. However, as Reiné explained, CG hair is one of the most difficult things to create, more so than any creature or even water. So when Reiné was discussing the complicated, long takes he shot of Medusa with all her magnificent hair he explained how seven special effects houses around the world were still working on these scenes trying to get them finished. But judging from this completed short scene he seems to have put fears to rest as it shows Medusa’s hair in full glory, just a taster of what’s to come, I’m sure!

The final scene focused primarily on Karnak and Gorgon, giving a glimpse of their powers. Karnak, who has the ability to see the fault in all things, faces off against a group of bad guys as he determines the best way to fight his way through. While Gorgon showcases the awesome power his legs hold as he stomps down on the ground causing a number of gun wielding men to fly backwards. With each character possessing such varied and different powers Inhumans has all the ingredients to keep the series momentum going whilst remaining intriguingly engaging. Inhumans will be shown in an expanded aspect ratio of 1.9:1, presenting the audience with 26% more of the image than 2.35:1 ratio film and offering the chance to become fully immersed into the world of the Royal Family. The advantage of watching the first and second episodes in IMAX cinemas is that it will give audience members the chance to really appreciate the quality and resolution that Reiné has accomplished. The first two episodes were shot at a resolution of 6.5K and completed using a 4K digital intermediate. However, it’s not just the visuals that need to be experienced but also the audio, as IMAX’s sound system uses laser-aligned sound that you can almost feel.

Reiné reconciled shooting the first two episodes of a series that would ultimately be watched on much smaller TVs, or even phone screens, through the belief that what he shot and created was the best he could have hoped for given the time and money he had at his disposal and the knowledge that it would be best experienced on a big screen. Whilst accepting that people watch content on many different devices these days, watching Inhumans on a huge IMAX screen allows the audience to become fully emotionally involved with the characters and to see the amount of detail and quality offered by the cameras. That aside Reiné is still sure that for those unable to see the first two episodes at an IMAX theatre, they will still be able to enjoy and appreciate the fact they were shot on IMAX cameras, although to fully comprehend the increased resolution and detail Inhumans will have to be witnessed at an IMAX theatre!

Experience the first chapter of Marvel’s Inhumans exclusively in IMAX from the 1st of September and follow the entire series on TV & other devices soon after.