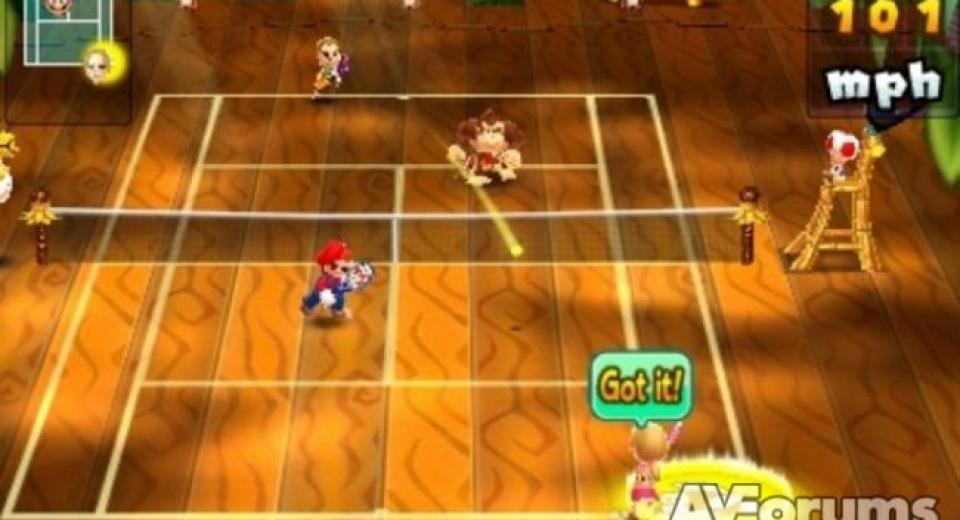 Well, it's that time of year again; the first rays of summer are starting to make themselves known, the football season has ended and we begin the run up to the tournament equivalent of a rain dance, Wimbledon. People are out-and-about, so what better time to release a portable slice of arcade tennis fun with Camelot's Mario Tennis Open on the 3DS?

The plump little plumber is no stranger to what is essentially posh swingball though, having been the driving franchise force behind several sporting offshoot titles on Nintendo consoles, including Mario's Tennis on the notably vomit inducing, headache factory, the Virtual Boy. As with all Mario branded spin-offs, the emphasis has always been on intuitive reflex fun, with a hint of tactics but nothing that'll get in the way of the pick-up-and-play appeal. No one expects simulation depth, just carefree play centring around special shots, Mario imagery and enough game modes to keep a commuter occupied. The game utilises the 3DS's gyro sensor to allow you to take aim via how you position the console. If you choose to lay it flat (or turn the option off) you stay with straightforward circle pad control, but if you hold it vertically you'll be able to adjust the angle of your aim just by tilting and swivelling in what is called Direct Mode. It's a great idea, and certainly gives an understated but still pleasing “wow” moment to those looking on at just what feats the tiny tech in your hand can perform, but that's pretty much all it is, a nifty gimmick. It also highlights an issue that I’ve yet to see solved, namely that the brand of 3D in Nintendo's handheld relies primarily on the same principles as a cereal packet hologram, and needs the eyes of the viewer to remain consistently stable. Hardly something that fits hand-in-glove with motion control.

The solution? Well when the 3DS is upright and in Direct Mode the 3D is simply automatically turned off, following the development logic of “If you can't get it to work properly, remove it.” Once you've taken aim and are ready to let off your Sampras serve you'll select a shot, either via the touch screen or the face buttons. Camelot once again prioritise the option that will be your core action, much like Nintendo have moved towards controllers for their home consoles with contextualised and minimised button layouts. A so called Simple Shot will be your early mainstay and represents the closest area to your stylus in a simplified layout.

You can perform lobs and drop shots, as well as adding spin in the form of sliced, flat and topspin strokes. The latter aren't entirely necessary, and if you want to forego the more complex touchscreen layout (that's complex by Nintendo standards) that incorporates them, you can choose from three options. When the ball comes flying back at you, a highlighted area will appear on your side of the court. If you make it to this Chance Shot zone in time to continue the rally your next strike will have a far greater probability of zinging off your racket and gaining you the point. Presentation wise, it's typically Mario, all bright colours and fairly uniform textures. The sound effects create as much of an atmosphere as the visual cues, and the mini game pinging of coins makes it more addictive than the mechanics indicate it should be. Various stages are selectable, all inspired by the Nintendo universe, and all with their own unique effect on ball physics. There are only two criteria, bounce and ball speed, but the variations keep it interesting.

Win or lose, you get a nifty replay option from a couple of angles, and you'll also be rewarded with coins, based on how well you did, that can be exchanged for new outfits and the like. In single-player mode you can enter Tournaments, play Exhibition matches (where the rules can be tweaked to your preference) or have a bash at some Special Games. The latter are a few nice practice treats, very Mario-inspired in places and kitsch, but handy for those looking to hone their skills. Sadly it's just maintaining rallies and hitting targets, and you'd expect a bit more inventiveness from a Mario sports title. It could be argued that they are there to help develop your skills, but a counter-point would be that such an inclusion, and one integral to getting to grips with the game, is surely only necessary when the main game itself can't sustain your interest?

So, it's pretty intuitive, has simple controls and is easy to throw yourself into, but is it fun? Well yes, but it has the air of something like Mario Kart 64, great with friends but a shallow experience on your lonesome. Bizarrely, there is no career mode or even a rudimentary story to draw you in.  All the characters such as Diddy Kong and Wario have their own differentiating skills, outlined in a basic fashion by a solitary word: all-round, technique, speed, tricky, power and defence. It's left to you to play them all and spot the vagaries in their styles, but there just isn't the depth to the AI, Mario games have always relied upon routines but here it is apparent that difficulty spikes are necessary to create the illusion of complexity. Now, multiplayer, that's where these titles come alive. Any hyper-simplistic sports game, be it Smash Court Tennis or Sensible Soccer develops into a different game when two minds are pitted against one another. The holes in the AI, like serving from an acute angle and following up at the net for easy points can, to some extent, be negated. Playing people either locally or online makes it much more enjoyable, and character, kit and shot selection finally makes a difference, forcing you to come out of the tactical rut you will inevitably fall into in the single-player.

Chance shots, ball speed, bounce, style of character, fancy gear accumulated and the like are all combined to create an air of intricacy and anarchic fun, but there soon comes a point when the solo part of the game loses its veneer and you see through the surface polish. Play the same character a few times and the AI routines become startlingly obvious, and the holes you can pick through on anything less than the hardest difficulty setting are only masked by the variations thrown in by extraneous factors such as the aforementioned chance shots. It can still be massively enjoyable, particularly doubles, but it lends itself to short bursts of play, and lacks the “just another few minutes” addictiveness of the best sports or Mario titles in that regard.

Mario Tennis Open is, in many ways, a classic example of why sports titles, especially Mario ones, are for sharing with friends. There's far more fun to be had exploring character styles and court tactics when in competition with a human mind, full of devious tactics and unpredictability. The mini-games, kit collection and joy of beating your own records flesh out the package, but those are fun and frivolous distraction, things to keep you occupied between multiplayer sessions.