Parts of your favourite Mario games rolled into one 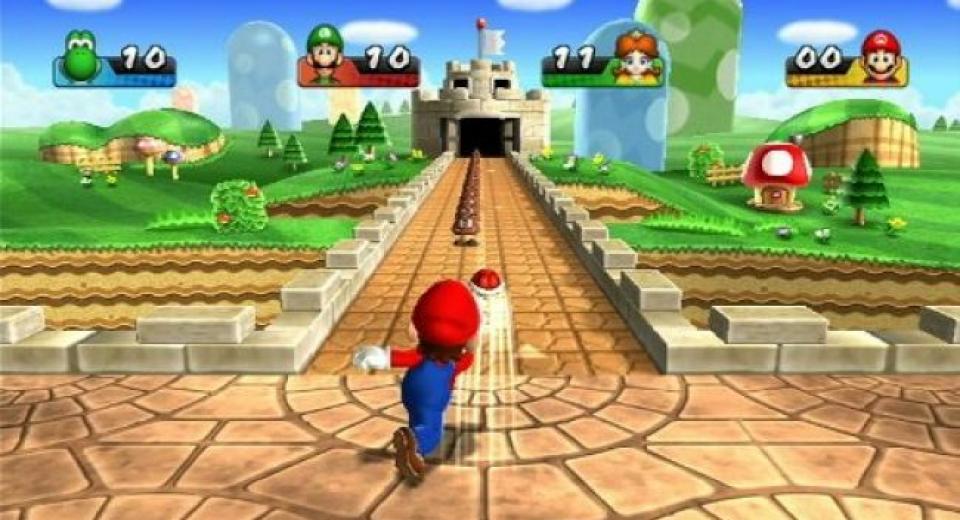 If you were to ask gamers to name three iconic gaming characters of all time, you can guarantee that in 99.9% of everyone’s responses you would see Mario as one of their selection choices. It’s a fact; Mario has touched every gamer’s life somewhere, somehow whether it be through repeatedly buying his titles or watching them being played at a mate’s.

The truth is, he’s getting old and some of his titles are getting a little stale, you need only to look at the number on this game; Mario Party 9. These Mario titles have spanned two generations with older iterations releasing on the GameCube and now being played worldwide on the Wii. This edition has a new twist though as it is the first title to be developed by Nd Cube Co as they take over from Hudson Soft.

Many who read this will probably know what to expect from these titles already; competitive play between friends and family spanning several mini-games and differing territories. To that extent things haven’t changed as the game takes you on a journey through recognisable and classic Mario environments.

It’s hard to describe what the game is like given that it blends so many different genres to make one enjoyable title. Initial reactions seem to indicate that it is loosely based on Monopoly as you must roll a dice in order to progress through the level which is set out like a game board. As you progress, you must collect stars and the winner is the one who has the most stars at the close. Sounds simple enough, but there are plenty of chances for you to lose stars and for your opponents to gain them. Mini-games, boss battles and challenges are all spread across the environment, all of which present opportunities for competition and the acquisition and loss of stars. All of these events play out differently and blend aspects of pretty much every past Mario title there is: platforming, side-scrolling sections and racing just to name a few.

When playing any Wii game, there’s the obvious problem that the graphics are not always the best whilst the definition is never helped by High Definition sets. The problem with jaggedy edges is present (but not always immediately apparent) but the actual graphics and presentation of the whole title is quite pleasant.

Some of the games do suffer from control issues however which is partly due to the accuracy of the Motion Plus controllers. This is most evident when playing the title when you must trap opposing players in a circle which you draw on the ground, or when you must turn tiles in order to make a complete image of their character.

There’s enough variety in the gameplay to make the Mario Party entertaining, with enough replay value to make this a turn to title in times of need. For instance, there are six courses for you to choose from initially yet you can unlock others as you progress and earn more points to spend at the in-game store. Mario Party initially looks like a title that enables four players to take each other on to attain, or retain, bragging rights but more often than not you’ll find yourselves working together in some instances. For starters, all your characters travel together in the same vehicle and all follow the same route which, if we’re being honest, is not something that you’d expect from rivalling characters. Secondly, there are also sections where you are chased by an environmental hazard e.g. rising lava or several Boo ghosts. All of which have repercussions for the entire party or those who find themselves in control of the vehicle at the time which means some mutual decisions have to be made at times.

There are moments where those who are over-competitive can gain the upper hand with perks being granted if you land on the lucky segments of the course or when Bowser spins his unappealing, so-called ‘prize wheel’. So if you see an icon that indicates you losing stars on the horizon, why not make use of your 0-1-2 dice that only allows moves of up to two take place as opposed to the regular 1-6 option. Don’t be surprised if your opponents curse at you for doing so, but nice guys finish last and all that eh?

It’s never a harsh criticism when you say a game has a look or feel of another game about it and it’s hardly surprising that certain areas of this title look very similar to Super Smash Bros Brawl. For some reason though, I couldn’t help but be reminded of Pokemon Stadium from the N64 when playing this, don’t ask me why but I just got that feeling. As many party games do, Mario Party will also probably suffer from longevity problems or be neglected by those who don’t often have company as it’s hard to see how this would be as enjoyable when playing solo. There are also problems with the description of some of the games which will leave some stranded and coming last when competing against their peers. There is a handy practice mode before you start though which is quite useful as some of the mini-games can be quite unforgiving for those who don’t act in a decisive manner.

As a party game, Mario Party 9 suits the casual market perfectly and will slot right into the rest of your collection that you wheel out religiously at every party or get-together. There are question marks over its addictiveness though and how long it will detract from your other Wii titles that are probably more appealing and will hold your concentration for longer.

When you look at the bigger picture there are many, many worse titles out there that you could play instead. Considering how many branded party games are nothing much more than a cash-in, Mario Party 9 shows how you can bring the best elements of past instalments and make one good title. For any dedicated Wii owner, this is a highly recommended purchase.

Mario Party 9 proves that long-standing franchises can provide entertaining titles and not just be worthless cash-ins and shows how party games should be done. Whilst there are problems with the controls at times and the usual gripes with longevity and long-term appeal, you can't deny that Mario Party does provide barrels of laughs when played with close friends or family and allows for healthy competition and co-operative play. Without question, this is a must play and must own title for any Wii owner who loves nothing more than social gaming at its near best.