Your best excuse to buy a Wii U. 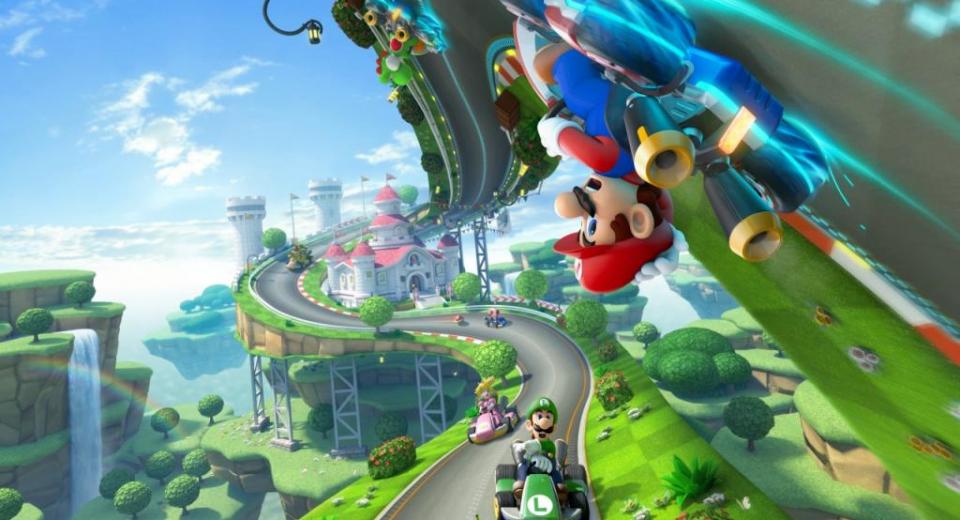 Last year at Gamescom I walked away from the Nintendo booth disappointed. After braving the queue to spend some quality time with Mario and his karts I left with the distinct impression that the pinnacle had already been reached in the esteemed series. Driving around what appeared to be the Mushroom Kingdom’s equivalent of San Francisco had left me unsure about its eighth iteration. It lacked colour and imagination yet it was somehow chosen to showcase the game. Combined with the anti-grav gimmick and another lacklustre use for the gamepad, as I peeled the seal off of Mario Kart 8 I was ready to be disappointed. Ready to mourn the passing of a Nintendo staple for over twenty-years.

How wrong I was. One Mushroom Cup later and all my concerns were blown away in a flurry of shells and powerslides. Skidding round corners, sparks spraying from my kart, I felt instantly at home in a world now realised in high definition with glorious colours and stunning lighting. Chaos reigned in the middle of the pack as green shells and piranha plants sent me reeling, but I didn’t care. I just smiled, taking in the scenery. In the space of four short races Nintendo demonstrated that they have lost nothing of their touch for creating a racing game that is both nuanced and instantly accessible. From the moment you jump into the first corner you know they’ve nailed it. Everything feels right. The initial hop, the tightness of the turn as you ease yourself through it sideways, the small explosion as you boost out the other side, all feel as good as ever. Anyone familiar with the series will have little trouble settling back into the motions and those new to it will find the generously wide corners of the initial track ample to become accustomed to it. Indeed, the first track is very clever in its design being suitably forgiving for the few people who have never Mario Karted before whilst equally showcasing everything that’s different in 8 to veterans.

The anti-gravity mode that I was so wary of comes only a few curves in as the track decides it’s spent enough time on terra firma and heads for the skies. Crossing a glowing blue line in the tarmac your kart’s wheels twist underneath and start glowing themselves, somehow gluing you to the road as it twists wildly through the air. Fundamentally nothing changes; the handling is exactly as if your tyres were touching the floor but in terms of track design it does wonders. Your head will tilt and sway as you fight to follow the road ahead. Cast your eyes around and they’ll be treated to some fantastic sights as you tear down waterfalls and drive upside down over the Mushroom Kingdom. Although Mario Kart has often defied physics it has never to this extent flouted their very existence.

Without doubt the tracks are the star of the show and out of the 16 new layouts there are only a couple I would hesitate at recommending. For spectacle it’s hard to beat Mount Wario, though. A point-to-point race down the side of a snowy mountain you are first dropped from a helicopter before navigating a ski run, racing vertically across a damn, and slaloming through a pine forest. It’s an ever-changing adventure as you barrel down its slopes. Elsewhere there are races that take you across the wings of planes in Sunshine Airport, through the clouds themselves and across Bowser’s airships with Cloudtop Cruise, and across the saccharine stretches of Sweet Sweet Canyon, a level seemingly inspired by Wreck-It-Ralph’s Sugar Rush. Even the San Francisco inspired Toad Harbour that worried me so has proven a great course once given the time. As with most, when handed opportunity to uncover all it has to offer it comes together as a delightful whole even if the theme is still a little bland. It does teach you to look beyond first impressions however and this philosophy carries through to its selection of retro tracks. None are as you imagine and most have been tweaked to include clever use of anti-grav. Some have seen subtle inclusions such as the chance to drive on the walls of the N64’s Toad’s Turnpike but with others whole chunks of the track are ripped up and placed at jaunty angles, though never to the detriment of the original course.

A minor inclusion but a welcome return are coins. A mechanic I loved on the SNES but one that had seemingly fallen out of favour until Mario Kart 7, collecting coins will give you a small increase in your top speed and make for interesting decisions as you speed through knowing that the wider line may cost you this lap but the extra speed may pay dividends later on. They also act as part of the wider game as this currency also unlocks new parts for your karts. Elaborate and amusing chassis combinations are joined with tyres and gliders to create your vehicle, each part having unique characteristics of speed, acceleration, grip and weight. Disappointingly my favourite combination of stats turned up a rather bland looking contraption but jiggling all components around can lead to a ridiculous looking starting grid as you see Bowser riding a blue, stuffed bear lining up against Wario in his pink Cadillac but sailing through the air under a giant squirrel.

It’s especially true in local multiplayer as the lure of certain karts are too great. Look is as much a key in those battles as your stats but when the shells start flying even those are forgotten. Getting four friends round a single Wii U is tremendous fun as you all try and fight the rubber banding and time your charge to the front hoping to avoid the inevitable barrage of red and blue shells. Interestingly it seems that the mid-pack battle is equally fierce with more often than not one of our number succumbing to the AI onslaught. They’ve a couple of new items to throw at you as well with the inclusion of a piranha plant that snaps at coins and racers alike, and also the super horn which if well timed can even blast away that most unwelcome of interruptions, the blue shell. The first time you avoid its effects it’s as though you’ve thumbed your nose at countless years of torment and in doing so feel utterly invincible. Whenever new racers sit down in front of Mario Kart 8 their first utterances are typically about just how gorgeous it looks. Mario and co are in true high definition for the first time and although it shouldn’t strictly matter it proves a huge draw, the richness bringing scenes to life as shadows dance across the track and those extra polygons painting a very pretty picture. Nintendo must know this too as the first four tracks are desperate to show off the Wii U’s graphical chops. Mario Kart Stadium alone seems to highlight the crisp new models and wonderful lighting in its staging beneath bright floodlights and in front of a packed grandstand, but then we move on to onto bright, beachside routes and moody temples at dusk. Each new stop on the tour taking its turn to show off. For a console much maligned for its horsepower it arguably pumps out scenes that are as pleasing as anything featured on its two heavyweight competitors.

With YouTube integration it’s easy to share these spectacles with your friends, too. Although it probably shouldn’t be shocking in 2014 that a major publisher is savvy enough to include such features, I’m still impressed/surprised at Nintendo’s newfound willingness to embrace the online world. At the end of each race you’ll be treated to a short burst of highlights, a reel of shots from a multitude of cameras around the track which can then be uploaded for all to see. Although there’s no direct control of the content you can select which drivers to focus on and what the automatic editor should focus on, be it your noteworthy powerslides or the hits dished out on your way to the podium. It does do a fair job and it’s often nice to watch them if only to appreciate the parts of the track you don’t get to see when staring fixedly at the road ahead. The only complaint is that there is no background uploading. If you want to push your clips to YouTube then depending on your connection then it’s time to down controller and go put the kettle on, something that has definitely caused me to hesitate from using this neat feature more.

Online racing also returns and is thankfully far more streamlined than the Wii’s outing. Friends can be invited into private lobbies to settle personal rivalries, whilst online tournaments of all shapes and sizes offer a more structured experience. However, by far and away the most rewarding aspect is how ridiculously easy it is to hop into random matches against up to 11 other racers, each voting for their favourite track. As engaging as racking up perfect ratings on each of the cups is there is nothing that compares to racing in a dozen-strong field of proper people. Knowing that green shell was clinically aimed (or randomly ricocheted) at you or that the kart drafting you across the finish line isn’t just another AI routine is so much more satisfying than facing the 150cc drones time and time again. Even if you are calling that driver’s parentage into question at the exact same moment. Long after your trophy cabinet is full and every character is unlocked then this is the corner of the game you will return to, testing your mettle against likeminded karters online. I went into Mario Kart a cynical sod and it took less than half-an-hour for it to turn my opinions on their head. Whilst I could recognise how good the Wii version was I never thought it moved the series on greatly, it was just more of the same. It was just convenient that “the same” was still very good. With Mario Kart 8 they build upon the series and have not just hit upon a superb set of tracks but have evolved them with the inclusion of anti-gravity, a seeming novelty that actually adds a touch of F-Zero.

As ever it is a hoot when you’re sharing a screen with three other friends but when they have gone home soundly beaten the online is there to pit you against more racers from across the globe. The mix of skilful racing and item shenanigans are a heady mix and one that is hard to beat.

I struggle to find a negative in the whole package but I feel I have to try so I turn to the gamepad; the bespoke piece of hardware exclusive to the Wii U functions solely as your kart’s horn. Toot toot.