"You know, cause it sounds like 'Mayor', but it's actually because her name is Mare... um, no, she's not an actual Mayor, it's just a witty play on words, ah never mind..." 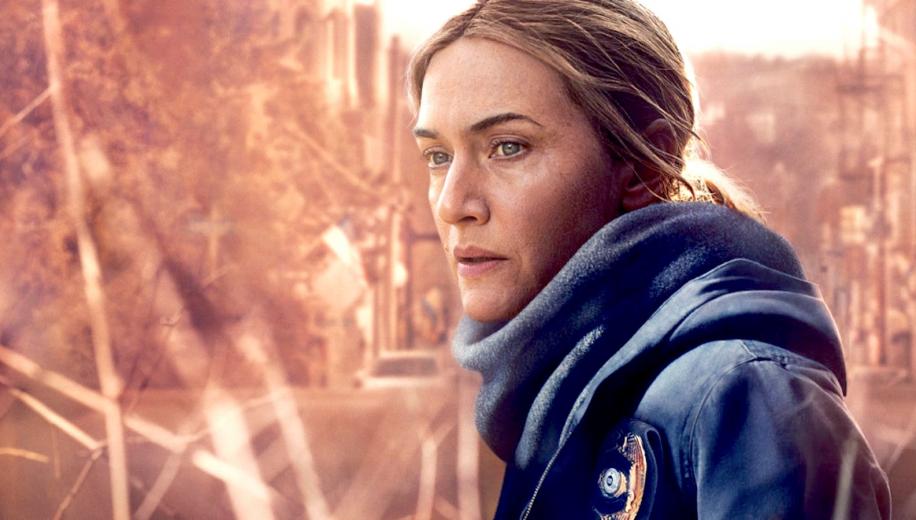 HBO scores another gem whilst Kate Winslet reminds us just how impressive an actress she is, so don't be put off by the title, this is well worth investigating.

Despite a thinks-it's-clever-but-it's-actually-more-like-a-bad-dad-joke title, it's really the "HBO's" that is going to sell this new crime drama, and that's not such a bad thing. Westworld, Succession, Euphoria, Big Little Lies, Deadwood, The Wire, Lovecraft Country - even Perry Mason came good in the end, despite bearing little resemblance to its namesake - HBO comes with a mark of quality. Blending vibes of True Detective with I Know This Much is True, Mare of Easttown is a tremendous showcase for Winslet, who hasn't enjoyed material this focussed upon her for a while, and really steps up to the plate for a fairly unusual offering even within her diverse filmography.

In a small town where everybody knows everybody else, local detective Mare leads an investigation into the death of a young girl - the repercussions of which affect her already troubled existence, dealing with her own teen daughter, and ex-husband who lives opposite, a cranky mother who shares her house, a cocky new detective brought in to 'get results' and the gaping wound of a tragic loss. Finding a number of close members of the community coming under the spotlight, Mare is in an unenviable position, with the pressure on to find out the truth, and, all the while, her family falling apart around her.

Mare of Easttown comes to the UK on Sky/NowTV, and looks solid enough despite the limitations of the platform. It's hardly a glamorous production, with the small-town setting and local, small-scale approach, never pushing the visuals and looking impressive enough using the NOW "boost" which gets them all the way into the 21st Century with a whopping 1080p.

Blending vibes of True Detective with I Know This Much is True, Mare of Easttown is a tremendous showcase for Winslet

The first couple of episodes of Mare of Easttown are utterly compelling, landing a gut-punch of an ending to the season premiere, whilst the second doubles down in terms of the shocking suspects - and the impact of those particular people being under the spotlight. It's excellent TV, finding a new direction to take the familiar small-town murder narrative in by refocussing instead on the colourful characters that permeate the piece, not least the troubled Mare herself. Winslet rises to the challenge, nailing the accent and commanding the piece, enjoying a wonderful grey area as this rural detective who is clearly highly intelligent (the detective work is impressive, particularly when tracking the bullet) but also veritably damaged, and more than a little reckless, no doubt partly thanks to an insane work-life balance which basically amounts to having no life. A number of famous faces colour in the peripherals, including Guy Pearce (trying his best not to give you slimy wolf-in-sheep's-clothing vibes, like he did in Tom Clancy's Without Remorse), Quicksilver himself, Evan Peters (who is tremendously convincing when drunk), Legion and Watchmen's Jean Smart, Spider-Man regular Angourie Rice, Greenland's David Denman, and The Outsider's Julianne Nicholson. Even if it's very much Winslet's baby, she also doesn't have to carry it alone, and it's a great ensemble cast.

Admittedly the third episode threatens to show some cracks in the formula, relying perhaps a fraction too much upon contrivance, particularly when it comes to the shock 'cliffhanger' ending of episode 2, which unravels pretty anticlimactically in the third, but Mare is clearly shooting for the long haul and - like True Detective and I Know This Much is True before it - also clearly prepared to put its characters through absolute hell to get there. It recovers some ground in episode 4, although it's difficult to understand why they needed to unravel the tone of some of the sequences with an annoyingly whimsical score (the scene where she wants a 'family talk'). Nonetheless, despite whatever missteps we might find along the way, this has all the makings of yet another HBO gem, with its fifth episode amidst some of the best TV viewing of the year, almost single-handedly pushing the show to utterly unmissable as a result.