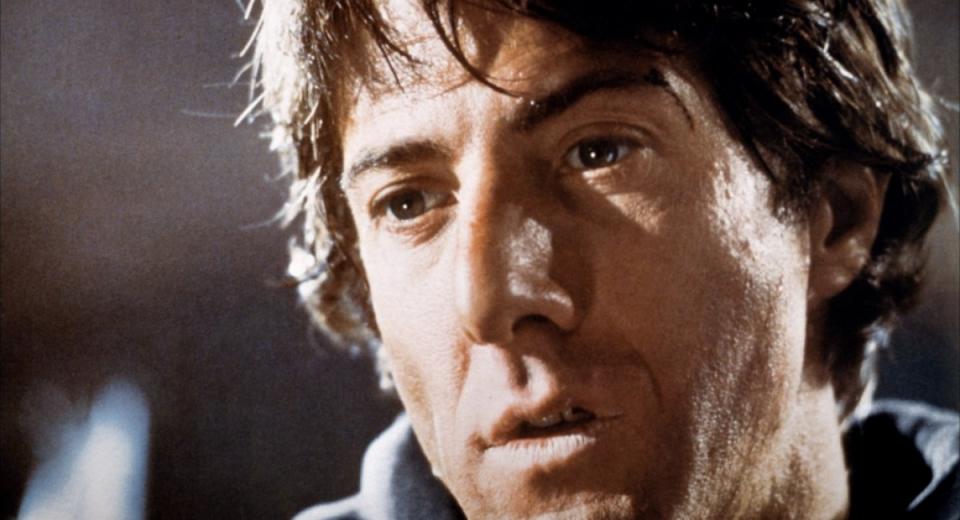 A chilling line voted at number seventy in the All Time Movie Quotes (by the American Film Institute) list, said by Dr Szell, who was ranked as villain number thirty four by the same Institute's "100 Years...100 Heroes and Villains" list, from a torture scene voted at number sixty five (on Bravo's 100 Scariest Movie Moments) from a film that was itself ranked at number fifty on the "100 Years...100 Thrills List." So tonight’s feature has quite a fearsome reputation and not just from those afraid of the dentist’s chair! So strap on your running shoes and make sure your teeth are clean as we delve into Nazi diamond smuggling, unwitting accomplices and double crosses in tonight’s feature presentation: Marathon Man.

Still riding high from all the accolades and wins at the Academy Awards and BAFTA’s for his last three films, British born director John Schlesinger looked to be the perfect choice for a thriller that pitched the ‘old and new’ acting talent together - in the form of Laurence Olivier and Dustin Hoffman respectively, a slew of other great acting talent (Roy Scheider, returning from scintillating form in Jaws, William Devane and Marthe Keller to name just three), together with a screenplay by Oscar winner William Goldman adapted from his own novel and the backing of a studio whose recent filmic output had been top dollar - and, indeed, in his hands became the instant classic that is so adored and still the recipient of much critical and commercial success. This is due to a number of reasons, it’s notoriety (that scene is still so difficult to watch), the believability of the cast and, perhaps most of all, the way the story unfolds. In this sense the film is very much ‘of its time’ – i.e. when the accountants were not in charge and a director could take his time to tell a story. A fancy way of saying Marathon Man has very deliberate pacing, where set ups and pay offs are scattered throughout (simple lines such as “I’m a marathon runner, I choose to ignore pain” paying dividends) and where every scene has a significance as it builds to a suitable climax. Such pacing and structure is very rare in modern cinema (Shooter (2007) had it, and more recently Tinker, Tailor, Soldier, Spy (2011) are close examples) which is increasingly pushing towards big, bold and brash which is being touted as ‘better’ – it’s not always (wouldn’t Iron Man 3 have been a better climax if Tony had defeated the villain with just the one battered old suit, rather than an army?)

The opening scenes with Thomas Levy, nicknamed Babe, (Hoffman) serve to introduce us to the character, his mannerisms and drive; scenes involving his running, flashbacks to his father, writing down the correct answer to a professor’s question but remaining silent about it, his PhD research all paint us a picture of who this person is living in the shadow of his father’s suicide, working on the same field to try and exorcise those demons, a driven man, but one that likes to remain anonymous – in essence an every man - awkward when approaching a woman for a date, but open and honest. Interspersed with these scenes are those involving his brother Henry (known as Doc) whose actions working for the Government (in this case the CIA) lead to some nefarious dealings, but his character is one with some integrity, for both himself and his country – dealing with the ‘dirty’ side but quick-witted enough to spot a problem developing and with gumption enough to follow through with a hunch. It is clear that these two brothers are poles apart despite their obvious affection for each other. And when a seemingly innocuous road traffic accident kills the car’s occupant it sets in motion a series of events that involve both the brothers, one unwittingly, and costs them very dear indeed.

The skill of the first act is linking together, what, at first, appears to be unconnected events; the traffic accident, Doc’s work abroad, Babe’s starting a relationship - and it’s only as the film unfolds that these events begin to make a cohesive whole. The film develops, in this sense, much like a novel does by taking it’s time to explain these background moments. As such the audience understands the motivations behind the characters and becomes invested in them so when their lives begin to unravel we are swept along for the ride. This emotional investment makes for some terrific thrills and some horrific moments as the characters are put through the wringer.

Hoffman was still early in his career but had already shown he was a powerful force, employing the ‘method’ school of acting he simply became his characters which could, at times, be very trying for his fellow actors and more often than not a nuisance for his directors – but the performances were second to none. At thirty eight during the time of filming, Hoffman was way too old to be considered as a graduate student, however by toning himself and his performance, we have no hesitation in accepting him in the role. In the beginning his fresh face hides the turmoil behind the eyes, but once his life starts spiralling out of control a hitherto untold strength begins to surface and we ride alongside him as he seeks the answers to what is happening to him.

So we know much about our protagonist. But what of our antagonist? He is Dr. Christian Szell, an ex-Nazi war criminal who is working with the CIA to bring other criminals to justice. Szell is played with utter relish by veteran Shakespearian actor Laurence Olivier who puts in such a subtle, nuanced and evil characterisation that it garnered him an Academy Award nomination. And boy is it something to behold – he simply personifies evil and has done more to dissuade people from going to the dentist than any other person, ever! The calm and calculated coldness of the man as he exacts his terrible torture is palpable. Even when the tables are turned there is still that menace behind the eyes. So we have, in these two actors, a clashing of the old style ‘acting’ and the new style ‘method’ and both bring about believable performances. And what of the famous “Why not try acting, dear boy” line spoken by Olivier to Hoffman after he came on set after spending the night awake to play Babe who had been up all night? Seems to be a myth.

And it is not just these two heavyweights that hold up the acting side of the story. Roy Scheider is simply excellent as Doc, showing a flawed character trying to make the best in a world he is only just prepared for. Marthe Keller convinces as both the loving girlfriend and the turncoat often in the same scene. And stalwart William Devane plays it perfectly straight all the way through, his good guy image allowing for a perfect twist that comes like a bolt out of the blue.

The final act of the film has a much faster pace pushing on the sense of urgency for both Szell trying to recover his wares and Babe seeking a way out. And whilst Goldman was not happy about the ending being changed from the source novel (Babe shoots Szell in the park where he was mugged and is then led away by the police) the one chosen has as much prominence and redemption. The standoff between Szell and Babe in the water treatment plant is rich with undercurrents and metaphor. Babe is able to face his accusor (in both his childhood and his current situation) and whilst he many not actually pull the trigger he most certainly figuratively does and it is this that allows him the redemption he needs to put his demons to rest and finally bathe in the sunlight outside of his father’s shadow and childhood angst. The removal from sight of the weapon – the symbol of oppression that has been holding him down – is a beacon of light that liberates him so that he no longer runs to ‘escape’ but runs for freedom.

Marathon Man remains a firm favourite for many people as there is so much going on under the surface. Each viewing brings out more hidden meaning and there is a cathartic ease when Babe is released, something that the audience can latch on to – not so much winning out over the bad guys, but more about being released. It has won and continues to win many fans. Recommended.