If you love cinema and everything that goes into being a cinephile, it’s a pretty ravishing watch. 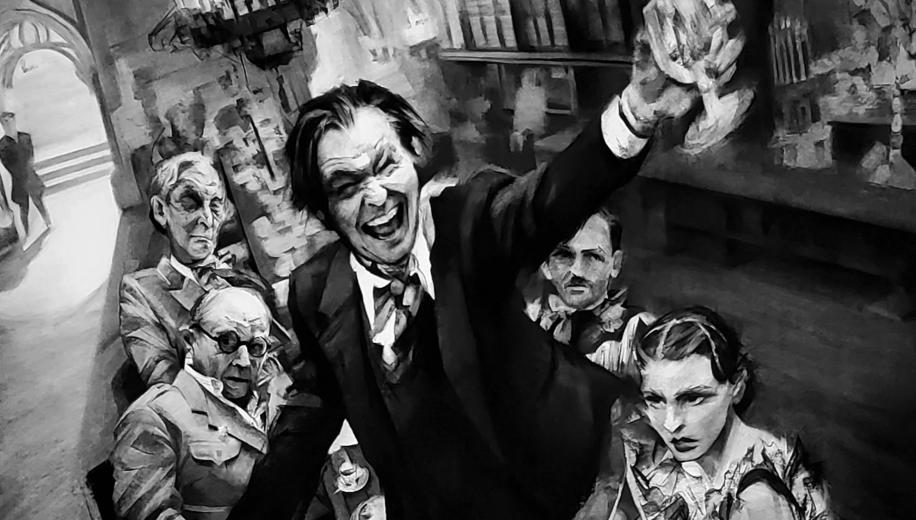 Fincher's deep dive into the life of Hollywood screenwriter Herman J. Mankiewicz, who clashed with volatile genius Orson Welles on his magnum opus, is a beautiful film about the Golden Age of Hollywood.

Citizen Kane is, of course, one of the most famous pieces of cinema – and culture – of all time. Studied and discussed and derided and worshipped by many a film student and cinephile, the 1941 film is often found sitting atop 'Best of' and anthology lists, so in a way is obvious fodder for ‘behind the scenes’ type content.

Then again, approaching it from the point of view David Fincher has in Mank is perhaps not the most obvious way in. Fincher has taken a deep dive into the life of Hollywood screenwriter Herman J. Mankiewicz (Gary Oldman), who shared an ill-tempered co-screenwriter credit with the volatile genius Orson Welles (Tom Burke) on his magnum opus.

Oldman sucks you in, the visuals knock you out, and the sweeping narrative’s many overarching themes will leave you breathless

Our titular character was a brilliant cynic who struggled with over-reliance on the crutches of gambling and alcohol. The name of his long-suffering wife Sara (Tuppence Middleton) is always prefaced with “poor” in conversation. Mank follows Mankiewicz after he’s resigned to bedrest in California at the suggestion of Welles to write, recuperate and sober up a little. He’s accompanied by secretary Rita Alexander (Lily Collins), to whom he dictates pages and pages of Citizen Kane dialogue. Welles has sent his great friend John Houseman (Sam Troughton) along to keep watch over the whole operation.

The film, much like Citizen Kane, involves lots of flashbacks and jumps into the past to explain the present-day timeline. The script here was originally penned by Fincher’s late father, Jack Fincher, which largely wants to investigate the story of a troubled writer and the various influences that got him and the Citizen Kane screenplay to where they end up.

Mankiewicz is great friends with Marion Davies (Amanda Seyfried), and this kinship forms the heart of much of the film. Davies is involved with William Randolph Hearst (Charles Dance) and, through her, Mankiewicz actually had an initially friendly relationship with the media magnate, who has long been understood to be the sole inspiration for Charles Foster Kane. In fact, Mank puts forth the theory that Welles himself may have also been at least partly the basis for the talented, troubled and arrogant character.

If you love cinema and everything that goes into being a cinephile, it’s a pretty ravishing watch. Oldman sucks you in, the visuals knock you out, and the sweeping narrative’s many overarching themes will leave you breathless. The film has recreated Classic Hollywood in painstaking fashion, from the shadowy black and white cinematography to astonishing attention to detail in recreations of the offices of producer Irving Thalberg (Ferdinand Kingsley), or legendary screenwriters Ben Hecht (Jeff Harms) and Charles Lederer (Joseph Cross). Indeed, the film plays out as as much of a biopic of old Hollywood as a biopic of Mankiewicz, though the central figure is never anything less than compelling.

Oldman’s performance as the drinking, smoking, smouldering, festering Mankiewicz has more than a bit of the Churchills about it. The actor is just as commanding and fascinating as the American screenwriter as he was in his Oscar-winning role in Darkest Hour. Oldman absolutely nails Mankiewicz’s well-documented caustic wit and barbed jabs that were powered by self-loathing and hard-won cynicism. The film’s other outstanding performance is by Seyfried, and her scenes are the most genuine and engaging of the film. As Davies, she’s warm and charming, a great counter to the sometimes sneering coldness of Dance’s Hearst.

Fincher’s film is largely concerned with the world around Mankiewicz, and the events and people he met throughout the years who went on to influence his screenplay. As well as being packed with little references to classic film (don’t miss the cue marks in the corner of the frame, for example) and spectacular cinematography by Eric Messerschmidt, there’s plenty of bigger societal issues that Fincher wrestles with throughout the course of the narrative. For example, issues of fake news, the corrupt and biased press are niftily transposed onto Mankiewicz’s outward disgust and disillusionment with Hearst when he endorses fake newsreels and vox pop interviews that attack progressive politician and author Upton Sinclair (Bill Nye – yes, The Science Guy).

It’s a little bit muddled in parts, and there’s a classic Fincher uber attention to detail that can sometimes seem a little bit like style over substance. But at its heart, this is a film about people who love making movies by people who love making movies. If you’re not a cinephile, or at least someone with a vague interest in cinema/old Hollywood/Citizen Kane, you might not find the many (many) name drops and cultural references particularly easy to follow, nor the complex twisty narrative and fast-paced dialogue easy to love.

A gorgeous piece of cinema made by one of Hollywood’s best. A beautiful film about the golden age of Hollywood. What’s not to love? A movie concerning one of the most famous also-men of the movies, and someone who sparked up countless criticism battles, cultural rows and is doubtless a top pub quiz answer… Mank is a stunning watch. But, much like its subject, it can’t help but be towered over by Citizen Kane’s shadow.

Watch Mank, take in its artistry and skill, and empathise with Mankiewicz’s many battles (with the bottle, dice and Orson Welles). Then go and absorb his masterpiece and let the genius wash over you… after all, what could be more festive than a Citizen Kane viewing party? Bah Rosebud to you and yours.