Frodo has come a very long way from the Shire. 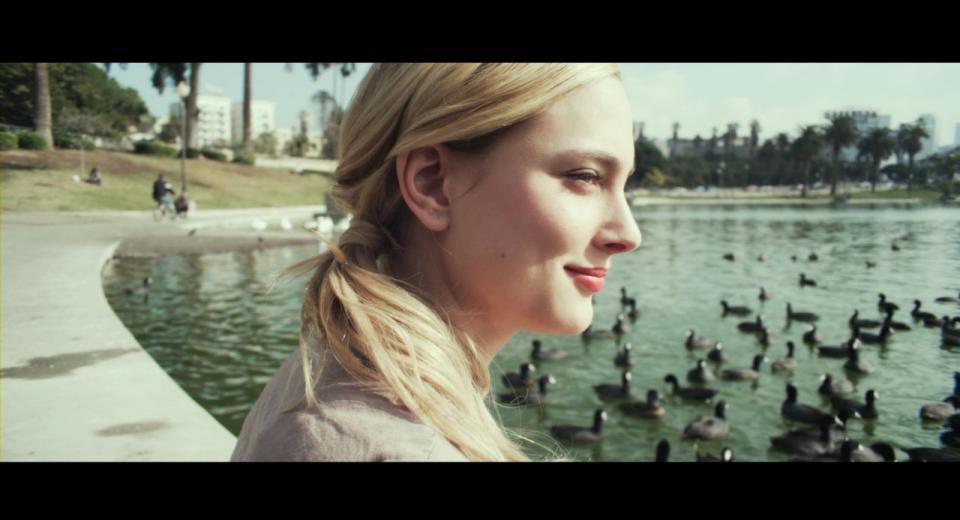 Maniac is a fabulously shot movie. LA nocturne al la Winding-Refn and Mann. It is becoming a recognisable cinematic style, and its cool blues and clean shadows are a mesmerizing delight that makes the City of Angels look like some lost bohemian quarter of Paris, or Toronto.

Well, asides from some aberrant banding in a couple of shots that fill the screen with light, and an occasionally milky aspect to the shadows, this is a solid transfer from Metrodome. Filmed with the RED, this is smooth and finely detailed, capturing backgrounds with clarity, close-ups with clinical attention, and filling everything in-between with appreciable depth – just admire the gymnastics from a distance as Frank does. It is a luxurious 2.35:1 and has been encoded via AVC.

Whilst still effortlessly eye-catching, it has to be said that this isn’t the most colourful of films, with the aesthetic favouring greys, blues and browns. The external night-time scenes have a dry feel to them, the neon sort of dusty and muted, though still striking. Interiors for the normals are bright and inviting, yellow and sunny. For madman Frank, they are gauzy, shot through with grey and brown, deliberately evoking decay and mustiness. Blood is very dark indeed, but suitably horrific. I think the skin-tones look fine. They can be a touch wan and sickly, occasionally due to the lighting, and the heightened contrast for the sunny outdoors provides an angelic lift, especially to Anna’s face. Costumes are mostly subdued, again this is in-keeping with the drier, more scrubbed veneer of the film. The most overt splash of colour is the deep red of the movie’s title as suddenly fills the screen. Sometimes the neon signs can appear soft and blurry, but this only serves to bring the mid-ground and the close-up objectivity into sharper relief.

For the most part, the black levels are excellent. Sometimes they can appear compromised and diluted with grey, but the majority of the shadows are thick and deep. The frame is always exquisitely composed, and the blacks certainly help to add tremendous depth and vitality to the image. There are lots of bright highlights and blooming going on, but this is all deliberate and designed for artistic purposes. You won’t want for detail. The image is strongly defined, the RED picking up pores and spots and errant whiskers with Holmesian precision. It may even be a good thing that the mutilations aren’t lingered-on because this level of detail would render them as purely pathological tutorials. As it stands, they are not that shocking – due to the staging and the mood – but to have gained Savini-like exposure would have sacrificed their potency still more.

As I said, depth and three-dimensionality are smartly presented and in abundance. The view down the inside of a train-carriage; the spatiality afforded the streets as women are pursued, or merely observed. Movement is fluid and smooth. I detected no aliasing. You shouldn’t encounter any problems with artificial sharpening either. This is a very strong and consistently engrossing image. “You know … I really thought she was going to get killed at the end.”

Yeah, well, I’m disappointed with the audio track here. Metrodome’s DTS-HD MA 5.1 mix doesn’t make any errors, you have to understand, and it all sounds clear and sharp … it’s just that for a modern horror film, I expected more. What we have here is a very bland and surprisingly unimaginative sound design that may have been transferred perfectly, but leaves no impression whatsoever and, apart from the brilliant bubblegum synth score from Rob, and a couple of fine songs (most notably the excellently moody Good-bye Horses from Q. Lazzarus, which killer-fans will already know from Buffalo Bill’s women-skinning exploits in Silence of the Lambs), which all have deep thrumming power and that evocative mi-air hovering density that feels so tangible you could almost touch the tones.

Dialogue has no issues. There’s mumbling and waffle with some of Frank’s words being subdued, and there’s screaming and shrieking, and all of this comes across with a mostly subdued naturalism. Frank’s rather clichéd heavy breathing rasps around in the middle-ground, nicely reinforcing our position and complicity in the events. The sound effects take in the slicing of flesh from skulls, the thudding blows of the stabbing blade, the splintering of wood and the crashing of glass tables and even cars into concrete. There is the grating of steel railing, and the gritty, teeth-itching sound of metal dragged against concrete. And most of this stuff has appropriate weight and severity.

But what we don’t get much of is viewer-immersive surround. In fact, I can’t think of a single instance when the rears came into play with anything other than ambient bleed for the score. Now, it is arguable that since we spend most of the time occupying the same space as Frank’s head, and that most of the atmospheric effects are caused by his own hands, or his own stalker’s breathing, there isn’t much necessity for wraparound shenanigans. But it would have been far more effective to have heard police sirens off in the distance, the voices and footsteps from potential witnesses, saviours, or other such interferers emanating from the otherwise cool neon cityscape. Or the hubbub going on during Anna’s exhibition. Plus, when things get nastier and more hallucinatory, we could have had nightmarish sounds and condemnations issuing from all around. Sadly, I feel the film misses a trick in this department.

But this is just me, and not an error of the disc.

How the audio mix actually fares as far as the transfer is concerned is very well indeed. Sharp, clear and detailed. Like the image.
The sub adds some wallop to the more strenuous of events, such as the savage knife thrusts and rather chaotic activity during the final act, and the bass for the score has marvelous presence. So, overall, this sounds just fine. The UK release of Maniac from Metrodome has the film’s trailer and a simply huge interview section. Running for just shy of two hours, we hear from the director, the writer and the stars in some detailed dissection of how and why this remake came to be. By far the best value for money is Elijah Wood, who provides tons and tons of insight, opinion and anecdote. He is amazingly forthcoming and proud of this venture.

The style of questioning is that of a cue card flashing up with a topic on it, to which the participant responds. I know that this is done as a response to all those people who criticize Q & A sessions for dwelling too much on the guy asking the questions and it also eliminates the nodding head and interruptions of the same guy. Well, I suppose it is a reasonable workaround, but it can make the session seem somewhat lonely and weird, removing the sense of spontaneity. In actual fact, there are a few times when a genuine question pops out of the interviewer’s unseen lips. WOW! This causes quite a stir. No, but seriously, this whole thing offers a terrific amount of background to the production, the shoot, the script, direction, photography, FX and the characters. Some would perhaps say too much – there is some repetition – but something this generous should not be sneered at. Frodo has come a very long way from the Shire.

The first two times I saw the remake of Maniac, I was impressed with it and sung its praises. Now, a lot further down the line, I am not quite so enamoured as I once was. The shocks seemed fewer and further between, and the bland landscape of new Frank’s personality and character denies us the queer and queasy empathy that we previously shared with Joe Spinell, rendering the killer as little more than a presence, and far less of an actual threat. But this does not alter the fact that it is still one of the better horror remakes out there and, stylistically and thematically, and performance-wise, knocks the bloody socks off the likes of Evil Dead.

Updating the concept and shifting the drama from grubby 80’s New York to glitzy neo-LA does, inevitably, mask some of the initial sleaze that made the original so raw and uncompromising. It now blends Euro-splatter with the art-house, and this is a beguiling combination.

Elijah Wood erodes our sympathy with a colder, more sterile performance, opting for the more mesmerizing approach to a character so removed from normality that he moves like an alien observer through the film. It is effective to a degree and is, admittedly, necessary to help give this take a fresher identity. The score is magnificent, working totally in-tandem with the gleaming, neon-dream visuals, and the gore is competently splashy and technically accomplished … if, at the end of the day, a little underwhelming.

Metrodome’s region-free UK release has almost two hours of interviews and a great transfer. I’d have liked more going on in the audio department, but that’s no fault of the lossless track provided here, and the image is strong and detailed..

This UK version may be uncut, but the film is never as nasty nor as disturbing as Lustig’s original. However, the new Maniac on the block is still a very worthwhile peek into a damaged mind.