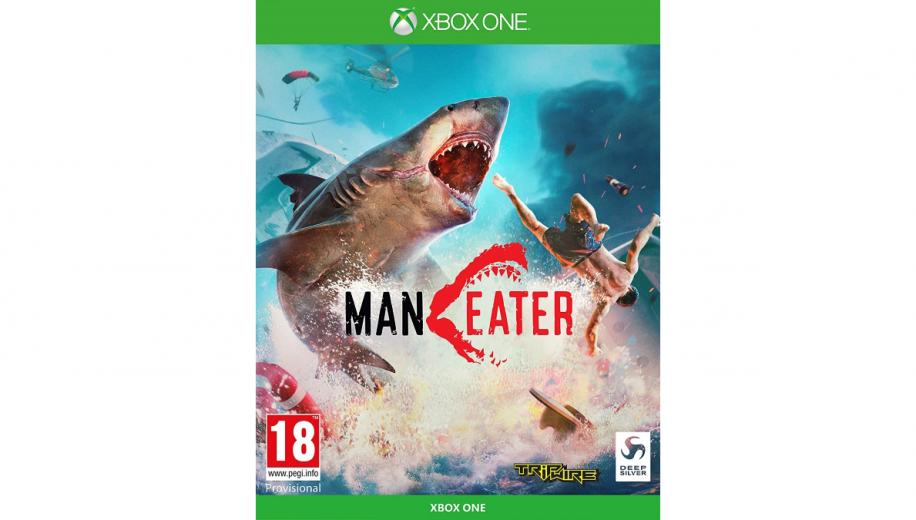 “Watch out boy she’ll chew you up (wo-oh here she comes), she’s a maneater.” Those of you of a certain vintage might recognise these are lyrics from the 1982 Hall & Oates song that this game shares a name with (younger readers can go for a Nelly Furtado option instead). You don’t have to be quite so old to remember the 2006 videogame Stubbs the Zombie which put a spin on the usual undead massacre format by letting you play as an actual zombie, complete with an oddly endearing love story. Maneater is largely repeating the trick, flipping the largely standardised action-adventure template to let you experience life from the viewpoint of a razor-toothed predator. And, as a power-fantasy that enables you to chew your way to the top of the food chain, there’s a whole lot of fun to be had with a fin.

In a common trick, the game teases you with that fully upgraded power-trip at the start, letting you play as a grown bull shark terrorising beachgoers in a US tourist trap. The tutorial guides you nicely through all of the basics and it’s an early thrill to be cutting through the water at will – whether or not you feel totally comfortable with the moral implications of snacking on virtual humans.

A power-fantasy that enables you to chew your way to the top of the food chain...

After mastering those basics, you get caught by the infamous shark hunter Scaly Pete, although he can easily be pictured as Quint from Jaws in more than a few scenes. It turns out you were originally playing as your now-dead mother and a new bull shark is literally born into Pete’s murderous arms, before taking a large bite out of one them and making an escape. It’s not exactly a Bambi moment. And so, in time honoured fashion, you have to build yourself up from scratch – only this time evolving from a young pup to a fully grown megashark. Your formative years are spent in a shallow bayou, with trenches effectively giving it something of a ‘road’ network, although cutting speedily across the surface is often the more effective (or at least quickest) way to move around. You share the water with plenty of handily docile prey which provide a nice boost to your health levels when eaten. However, there are also plenty of predators around and in your youthful state they can be quite a threat.

The combat system is pretty simple, feeling similar to aerial combat in the way you and your enemy might circle each other. You can attack by biting with the right trigger, while using the ‘lunge’ speed boost or dodge mechanic to avoid attacks and ideally counter while your enemy is vulnerable – especially useful against the bountiful number of alligators who can be a real nuisance early on. It does seem like a bit of missed trick that there really isn’t more to it than that and by the end of the game you can get by largely by just mashing the trigger until you’ve finished your meal.

The same applies to your general mobility. You can leap out of the water with some style using the lunge move and there’s also a jump button – so yes, you really can ‘jump the shark’ – which is useful for leaping across to new areas or smaller pools of inland water and later on for jumping onto the decks of boats to chow down on some hunters that are hot on your tail. However, there was definitely scope for some clear combos that would have made life a bit more fluent than trying to jump-jump or jump-lunge to get to some of the higher targets. This is especially the case when you have to make one of your many trips onto dry land, because rather than making your human targets fast and athletic in the water for a challenge, the devs have made them dumb as hell but placed lots of them on land (and even on bridges or walkways). So instead of some graceful and elegant stealth kills, you may well wind up flapping around like a drowning goldfish trying to reach your quota.

It’s not entirely bad, and there is some satisfaction when you do somehow reach some of the tougher collectibles that might have seemed impossible at the beginning – even if it does seem more by luck than judgement. However, as much fun as the game can be there are several of these moments where you’ll think ‘it could have been so much better if only they’d done this’…

The first few hours can be tough at times, but as with that trusted action-adventure template, there is scope to travel back and forth between newly accessed areas and those you’ve been to before. One such trick is to put off some of the trickier boss fights early on, such as the high-level target enemies and one apex predator you’ll find in each of the eight locations, until you’re better equipped for the fight. Although levelling up doesn’t bring any obvious improvements, completing missions to unlock new upgrades can make a big difference.

The predator/prey pendulum begins to swing in your favour

You can upgrade various parts of your body with some mostly odd-looking but powerful (and upgradeable) add-ons, as well as boosting three additional perks. It’s poorly explained but pretty straightforward, even though the changes to your appearance can vary between a badass super-shark and the pantomime villain from a Disney movie. This is also enhanced by your evolution to a teen, adult and elder until you max out as a megashark. Even into your teen or early adult years, the predator/prey pendulum begins to swing in your favour and some of the early annoyances, to paraphrase a classic Gary Larson cartoon, well, you’re just snacking on those things like tic-tacs. By megashark status nothing is really a threat, with only the likes of orcas or sperm whales proving an issue – but that’s only because they’re the only creatures you can’t kill in a few seconds simply by mashing the trigger. While that may sound like a criticism, it’s actually pretty great.

You see, whereas many games that pit you as the saviour of the universe but still leave you utterly vulnerable to a drunk with a sniper rifle or some other way to eat into your health bar for cheap thrills, Maneater does no such thing. You ARE the apex predator here and nothing can stop you, so you can swim around with almost complete freedom to complete the required quests, track down the collectibles or whatever else you like. And if anyone picks on you, well, you’re literally armed to the teeth and let’s just say a few alligators and barracuda would pay for the tenacity of their siblings earlier in the game.

You ARE the apex predator here and nothing can stop you...

The only real issue we had is that the majority of those missions are pretty straightforward and repetitive. Go there, kills a bunch of creatures or people (or one tough one), rinse and repeat. It didn’t detract too much from our enjoyment, but we ultimately spent more time tracking down the collectibles (mostly for the many Easter Eggs references they deliver, with obvious nods to the likes of Goonies, Cast Away, Waterworld and Point Break) or taking on the Hunters. Being able to jump over their boats and snatch them off the deck or even landing onboard to chomp through the whole crew is an oddly satisfying way to while away 30 minutes or so as you build up your ‘infamy’ rating. The AV Hits and Misses

Visually the game is pretty solid. We’re not talking anything standout, but some great lighting effects help to bring the underwater worlds to life, while your bull shark cuts a slickly animated path through them. Perhaps more surprisingly the locations above the water are also rather interesting, ranging from destitute backwaters to lavish tourist havens and ultimately the deep blue seas. There are golf courses that hide rewards in their water traps, for example, while the network of pipes, tunnels and caves below the surface are equally fun to explore.

The audio is also decent enough, if unspectacular, but there really is only so much that you can do besides a few tail swishes and bubbling effects – even if it does sound like it’s all filtered through a scuba diver’s mask. There are a few nice surround effects with the odd whale cry or seal bark echoing around once you get into the larger open waters later in the game but we’d have liked to see a bit more of this to add to the underwater immersion. Perhaps the highlight of the game is its narration, delivered flawlessly by Chris Parnell. The gameplay in Maneater doesn’t really play for laughs, even if the trailers do have something of a cartoon style to them. However, the ongoing narration delivers a wonderfully whimsical side-dish to the action, combining the odd shark fact with plenty of spoof and satire – even if you can find yourself detached from the action as you soak up the voice of Jerry from Rick and Morty sounding like he’s cheerfully right about something.

Maneater is an impressively quirky break from the norm...

The only problems were more tech issues, with some awful clipping trashing the screen on a few occasions (often as a result of the lighting), while the game also crashed a few times for no obvious reason – but the autosave is solid so no real harm was done. While your progression is largely seamless with no loading times, there are some overlapping areas late in the game where you’re constantly crossing borders and this can cause a short, but rather infuriating, delay as you’re pulled out of the action for a loading screen – sometimes mid-fight.

By sticking to the tried and tested formula of many adventure games but flipping the dynamic by putting you behind the dorsal of an apex predator, Maneater is an impressively quirky break from the norm. It’s a little limited in terms of its scope and we’d argue there’s room to improve with its control mechanics, but as megashark power fantasy it’s a whole lot of fun.

There’s not a whole lot of competition for shark role-playing enthusiasts and so the game can make for a welcome and unique alternative to the usual shooters and action RPGs out there. It might take a while (or some major DLC) for any notable replay value to kick in, but we got a good 15+ hours of light-hearted entertainment out of the game. So if you’re looking for some respite from the ongoing pandemic, we’d happily recommend you try snacking on a fisherman’s friend.