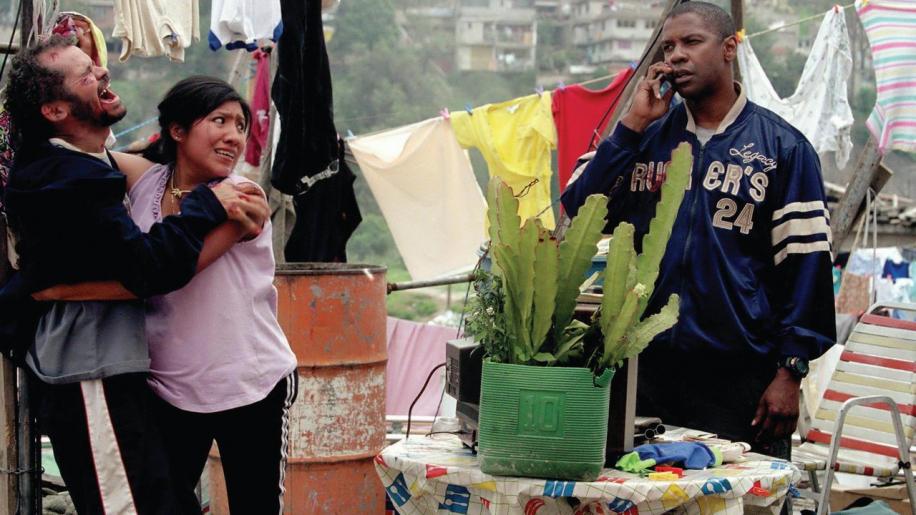 Fox have provided a theatrically correct 2.40:1 aspect anamorphically enhanced for widescreen TV's picture with an average bit rate of 5 - 6 Mbps, and it is quite, quite outstanding. The aforementioned different film stocks are all handled extremely well; colours are often subtle, boosted and drained depending on what is needed, but never falter. Detail levels are superb with everything in pin-sharp clarity even down to the rain and smoke. In some cases the picture is intentionally dark and the blacks and shadows are spot on. Since this is a modern film there are no instances of print damage, nor any dust, it is pristine. Digitally I spotted nothing, no artefacts nor edge enhancement. This is certainly one of the best live action transfers I've ever seen, exactly how a film on the DVD format should look.

You want sound options? You got them. The disc is supplied with English 5.1 Dolby digital and DTS, French and Spanish Dolby digital surround. The sound stage is used to full effect in this film, right down to the birds in the trees. The 5.1 tracks are full and rich, nicely separated with plenty of rumbling from the LFE. There are plenty of opportunities for surround effects to immerse one in the action, and immersion is what you get. Dialogue is mostly from the centre, clear and precise without distortion, hiss or being drowned out by the action. When called for the dialogue moves to the relevant speaker completing the surround effect. As stated above the LFE gets plenty of work, be that from gunshots or explosions, or the score which also demands some deep bass. Both the Dolby and DTS tracks have very similar mixes, but as per usual the DTS tops the Dolby in loudness and deeper bass, but in this case also wins out with fuller, clearer separation. Remember what I said about the birds in the trees, well the DTS picks them out precisely, the Dolby struggles to separate them from the rest of the ambient background, so in this particular case, if you have a DTS decoder, go with that one; if not the Dolby is still extremely good. The two surround tracks are, too, very well realised, the Spanish one sounding deeper and clearer than the French; but both have great separation considering the limitations of that platform.

Disc 1 contains two audio commentaries, one from director Tony Scott the other from producer Lucas Foster, screenwriter Brain Helgeland and actress Dakota Fanning. Scott's commentary reminded me very much of his brothers efforts; laid back with a sly sense of humour and a willingness to criticise his own work. He talks at length about his intention to make this film some 22 years ago, and updating the source material. He is appreciative of his cast and crew, and explains his thoughts on the different film stocks used, as well as actual real life kidnappings of which elements were incorporated into this film. It is an interesting talk; if occasionally slow with the odd pause here and there, though unfortunately most is repeated in the making of documentary on disc 2. Conversely the second commentary is a rather lively affair, but sometimes less than satisfying with the two adults being rather condescending and patronising to little Dakota. Her contributions are many and it quite refreshing to here the innocence of youth talk, but it does highlight her age; take from that what you will. Foster, though, seems to have the most to say, even though there is little information, with Helgeland taking a back seat, which is a shame as we already know from other areas of the disc that he wanted to direct this film, and his perception and take might have made a fascinating talk. As it is we are left with a relatively light affair, and one that is maybe only worth a single listen.

Disc 2 contains the majority of the extras, but it is not bursting at the seams as per other “collector's editions”. The highlight of the disc, for me, is the 72 minute making of documentary Vengeance is Mine. It is split into five titled chapters, of which you can watch individually or all together. It is a very detailed account of the making of the film; each and every cast member and major crew contributor get to have their fair share of screen time. Aspects of production, location, screenwriting, casting, acting, training, you name it, it is covered here. All shot in anamorphic 16:9 it is a very polished piece and one of the better making of documentaries.

Next up is deconstruction of Pita's abduction scene, which can be viewed by screen play, storyboards or four different camera angles with or without Scott's commentary. Watching all four angles works best, with the commentary on, you can see every bit of film used and Scott again talks about the different film stock he used to make the audience aware of what is going on. It runs for about four minutes.

There are 15 deleted scenes that, again, can be viewed individually or all together with or without Scott's commentary. When played together they have a run time of just over half an hour. Most were removed due to timing, though other (like the Washington sex scene) were deemed unsuitable for the character, by Scott, yet others were removed to tone down the violence, by the studio. There is also an alternate ending, inspired by Washington himself and filmed by Scott, that some of the more gung-ho might find more satisfying. However, I personally agree with Scott's ending in a far more anti-Hollywood way. Also fascinating to hear the control Scott has over this release, there were additional deleted scenes that he talks about, but didn't want to include on this DVD because he felt they were too 'saccharin'!

Finally there are three theatrical trailers and four TV spots.

It probably hasn't escaped your notice that the fist disc in this set is pretty much a straight port from the single disc already available; with that in mind, is it worth upgrading? If you don't own a copy, then it is a no-brainer, this is the version to own. If, however, you do own the single disc, you have to ask whether or not the 72 minute making of and 30 minutes of deleted scenes are worth the extra cash. Certainly there is plenty of run time, though repeat viewing maybe somewhat limited. It is a very cynical ploy on the part of Fox to pull this stunt, since those that know the film would have wanted this release in the first place. As a film though, Scott has produced a stylish drama worthy of accolade and the print and sound quality on this disc are second to none. It is a finely crafted film and a well designed double disc set, it is just a shame it wasn't released along side the single disc version giving people the choice from the outset.