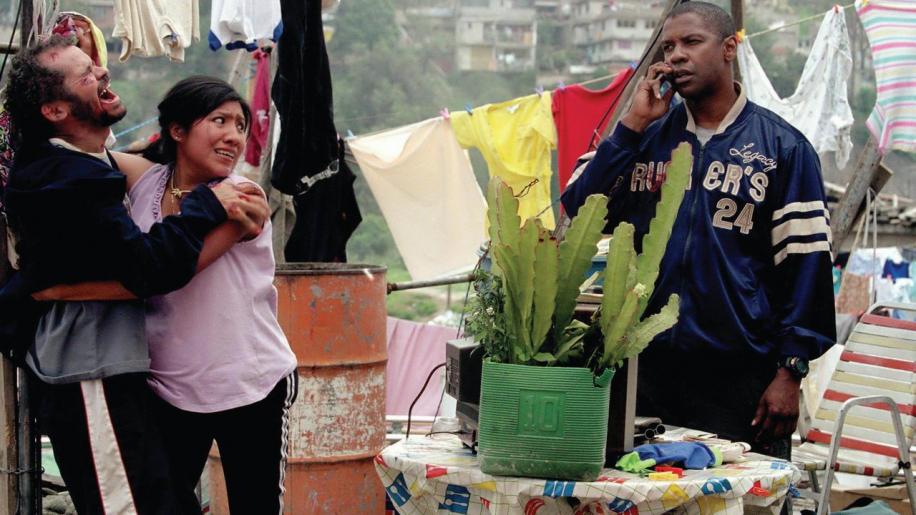 ”There is one kidnapping every 60 minutes in Latin America. 70% of the victims do not survive”

So opens the Tony Scott movie “Man On Fire”. A remake of the 1987 Elie Chouraqui movie starring Scott Glenn (who himself worked with Denzel Washington in “Training Day”) and based on the (allegedly autobiographical) novel by A.J.Quinnell, this release sees the story transported from Naples, Italy to Mexico City.Burned out CIA operative John Creasy (Washington) travels down to Mexico to visit his friend Rayburn (Christopher Walken). After Rayburn suggests he should get a job as personal bodyguard to give him a purpose again, Creasy takes on the role of protector to 8 year old Pita Ramos (Dakota Fanning) but, just as Creasy is starting to believe in himself again, he is taken down by a group of ruthless kidnappers and left for dead. Recovering from his wounds, Creasy finds that something went very wrong with the kidnappers demanded payout and he vows revenge on everyone who profited in any way from the crime.What we have here is a story of revenge, retribution and, ultimately, repentance and penitence. The movie builds slowly - starting with the development of the friendship between Creasy and his young charge Pita, as she shows him a way back from his drinking problem and the hell of his past, gradually winding up the tension with Pitas being kidnapped and, ultimately, all hell being let loose as Creasy seeks out those responsible. I wasn't at all sure about Scott's style at the beginning of the movie though. Crash cuts, MTV style hand held camera shots (which seem to be all the rage at present in “gritty” filmmaking) and a unique style of “pop up video”-like subtitling (used not only for translating the Spanish language scenes but also to add emphasis to certain lines of dialogue) are initially fatiguing but, as the plot unfolds, add impact and realism to the piece. Denzel Washington is excellent in his portrayal of the haunted Creasy, a man with many demons in his past who excels at destruction and the art of death. Desperate to find a way to live with what his past, his desire for retribution upon those responsible for the abduction of his supposed salvation is understandable and believable. However, the real stand out here is undoubtedly Dakota Fanning. 9 years old and currently in high demand for movie role's and with 17 movies under her belt already (counting 5 movies in pre or post production, including the much discussed 2005 “War Of The Worlds”), she manages to portray Pitas' relationship with Washington (much toned down from the relationship with the 12 year old in the novel) without descending into too much schmaltz.Finally the movie is to be commended for its conclusion. Obviously I won't spill the beans as to the final scene but, in the lead up to the last few moments, I honestly believed they would back away from a dark ending, but they didn't. The ending here is poignant, emotional and brings the character of Creasy to a suitably noble conclusion, a rare thing in an action movie.