Man on a Ledge Movie Review 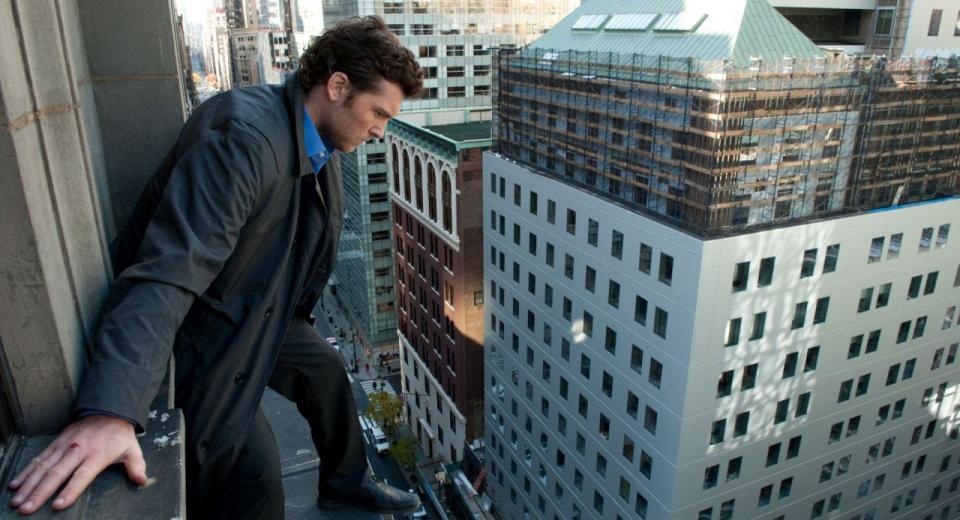 It doesn't take a genius to figure out what the premise might be with Man on a Ledge; suffice it to say, it's pretty adequately titled. The biggest issue, and there are many, that I have with it is that it's set up to assume that you are incapable of following the movie without constantly pointing out the obvious, or spelling things out for you. It irks me when movies fall foul of this, not least because a movie's quality can often be judged by whether it leaves you alone to enjoy the narrative, or whether it tries to hold your hand and lead you clumsily through the narrative. The latter, sadly, is the case here, and it seems it's largely due to the fact that little known director Asger Leth, is trying too hard to make the movie more complex than it's possible for it to be without being utterly convoluted. In fact, Man on a Ledge is barely 15 minutes old before he feels that somehow, the movie's premise may have escaped us and deems it necessary for us to be reminded about what's going on by a stereotypical New York City cop bellowing into a dispatch radio that they do, in fact, “gad a man... on a ledge”. Really?

Ok, so the premise is simple. There's a man on a ledge. Turns out the man is Nick Cassidy (Sam Worthington), a former cop who was imprisoned for a crime he maintains he didn't commit. When the police arrive at the hotel said Ledge belongs to, Nick informs them that he will only speak with one specific police negotiator, Lydia Mercer (Elizabeth Banks). As things transpire, Mercer was recently in the media for having lost a jumper on the Brooklyn Bridge, the result of which seems to be somewhat of a pill-popping downward spiral for her, wrestling with her conscience. Her confidence is clearly compromised, but as the movie progresses and she gets to know Nick a little better, her determination to convince Nick not to jump, grows. It's never really explained how Nick believes having Lydia Mercer being the negotiator might play to his favour. I assumed it was something to do with media coverage of the Brooklyn incident, but I struggle to find a fit with that and Nick's plight that is watertight. Seems a pretty fragile link.

With a confluence of woefully obvious flashback scenes and narratives, we see Nick's story unfold. Having fervently pleaded his innocence to the crime of stealing the largest diamond ever from billionaire Jewellery tycoon, David Englander (Ed Harris), Nick remained incarcerated. Whilst on day release from prison for his father's funeral, Nick manages to get into a fight with his brother. Though heavily guarded and handcuffed, Nick manages to grab one of the police guard's guns and escape. He sets about clearing his name.

What follows is a remarkably average series of overly engineered, far fetched twists and turns that slowly reveal that Nick has a bigger plan than just standing on a ledge and proclaiming his innocence until people below start to believe he is innocent. The heavy media presence goes unexplained too, and seems intangible and in some ways, voyeuristically morose. The ridiculous plot thickens, with Nick's brother Joey (Jamie Bell) and Joey's girlfriend Angie (Genesis Rodriguez), who appears to spend more time getting into or out of clothes than wearing them, were in on the escape and are attempting to steal the Diamond it's claimed was stolen by Nick previously from David Englander's safe. If it was stolen before, how can it be stolen again? Nick's ledge antics are providing a much needed distraction, as the crowds in the New York streets below begin to grow and gather. Coupled with another equally implausible and somewhat inexplicable sub-plot involving Nick's best friend and dirty cop Dante Marcus (Titus Welliver), its a convoluted and obvious set up and knock down.

It's not without it's redeeming features and saving graces; Man on a Ledge is certainly not groundbreaking cinema, but it has a good cast that seem to execute their individual roles above and beyond the screenplay's limited aspirations. Firstly, Sam Worthington is a good actor. His ability to make a role his own, no matter how questionable the movie, seems to come rather effortlessly to him. He doesn't overplay characters, and although brilliantly capable, he seems to bring a kind of likeable honesty to his roles. With some excellent performances under his belt, such as Human Resistance soldier Marcus Wright in Terminator: Salvation, or as 9 foot tall blue guy Jake Sully in Jim Cameron's Avatar, and perhaps most notably, his understated and powerful role as a young David Peretz in John Madden's espionage thriller, The Debt. He carries a natural ability that is rare to find these days in Hollywood. In the face of a mediocre script and questionable screenplay, he plays the role well in Man on a Ledge. One of the movies' real redeeming qualities.

Secondly, Elizabeth Banks does a pretty good job working within the narrow confines of the role she's given here too. It's not taxing by any stretch of the imagination, and certainly doesn't put her natural comedic ability to the test in any way, but she manages to illuminate what is essentially a stereotypical and dull “cop on the edge” type character. It's not Academy Award material, that's for sure, but it's apparent immediately that without her, we would struggle to find any empathy whatsoever for her character.

Ed Harris is hugely dislikable as David Englander, and though his involvement in the movies' premises is somewhat passive, he holds his own reasonably well. He's heavy handed with it, but his natural on screen charisma that he exudes forgives him the more over the top approach to playing David Englander. Again, probably not a role that will make his showreel, but I doubt it would make his reel of shame either.

I struggle to dislike the movie wholly, and find that it is, indeed, watchable. Don't be surprised if you find yourself inadvertently groaning, or rolling your eyes. It also doesn't quite manage to capture the feeling of suspense that it's obviously going for. It wants you on the edge of your seat, but it often leaves you sitting back with your mind wandering. It's not difficult, if your mind does happen to wander, to snap back into the plot with little effort, and without feeling like you've missed something.