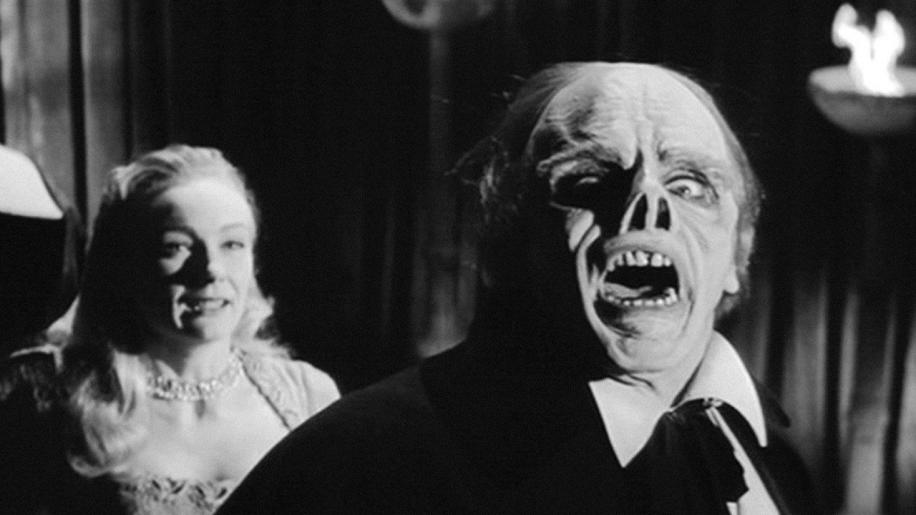 “The true story of the life and loves of Lon Chaney”

Of all the types of film that I generally actively shy away from, the biopic must rank fairly highly. It is not because I don't appreciate the stories that they try to tell or the craft that has gone into making them, but rather because of the archetypal formula they so often follow. As a fan of Johnny Cash I relished I Walk The Line and I'm always interested to hear the opinions of others with regards Patton and whether it was a satirical swipe at a man deluded by his own sense of grandeur or the telling of a true American hero's triumph in his nations darkest hour. However, these films are the exception, with the former falling within the standard formula for the genre but appealing to me because of the subject matter and the latter being intelligently ambiguous. The vast majority of biopics won't fall within these realms though. They'll most likely be the narrative of a person's life, in whom you have no intense interest, other than to see the film itself for education. This was the case for this review as, though knowing little of the subject himself, I had no great experience of his works or of the man in any way.

Man of a Thousand Faces loosely tells the life story of Lon Chaney, one of the true pillars of silent cinema and particularly that of horror. His name endures primarily because of his wonderful characterisations in such films as Oliver Twist (1922) and The Hunchback of Notre Dame (1923) as well as a host of other roles that spanned just under two decades. That his work is still studied today reveals the reasons why such a biopic should be made, especially when one considers the sheer amount of classics the man could claim amongst his incredibly productive time in movies.

As with all such films, arguably the most important ingredient to get right is that of casting: Will Smith as Muhammad Ali or Sean Penn as Emmett Ray (from the 1999 Woody Allen picture Sweet and Lowdown). When portraying a figure from reality, the role of the key character mustn't jar, either they resemble the person physically/characteristically (as with Smith) or if the public is ignorant to a certain extent of the individual, then the role has the possibility of being filled by almost anyone (as with the casting of Penn to play Ray) due to the viewer's inability to critique the likeness. In this case, James Cagney takes the title role of Chaney and it is a casting decision that has been discussed since, as it is far from universally approved. One the one hand, Cagney was 54 when the film was released, whilst Chaney himself died at the age of 47, thus he'd be far from the top of many a list when drawing up names who could depict the man during his younger years. However it was not this which many objected to but rather their physical differences. Chaney was a tall man with a long expressive face whereas Cagney, no matter how hard he tries, remains far shorter and with a face one could describe as plump. This doesn't hold him back though as his sheer screen presence more than fills the void between the two men with regards stature.

Personally, I relished the performance. Any misgivings I had were swept away with the opening scene of a young Chaney taking to the stage replete with his tramp clown make-up. Having started his career as a Vaudeville “hoofer” he is delightfully nimble on his feet. Having known of his dancing prowess I was unsurprised to see this used to its full potential but what I was unprepared for was the comic turn that utilised exaggerated expressions of his face. Even for an older gentleman, he oozes the confidence of a young man in these first few shots as he seamlessly glides onto stage with all the confidence of a consummate performer. The fact that this actor, so renowned for his taut tough guy persona, was able to contort his face to comedic effect frankly amazed me.

It is here that we confront the first major criticism of the film though. The fact that we are able to suspend our disbelief of the age discrepancy between subject and depicting actor is laudable, but it is only really effective during performance scenes. Unfortunately these are all too rare. This, after all, is a film telling of Chaney's life, from boyhood bullying troubles, through see-sawing relationships, to the grave. The foremost of these interpersonal struggles revolves around his first wife Cleva - the mother of his child Creighton (later to become Lon Chaney Jr.). It is to her credit that Dorothy Malone puts in a performance that matches Cagney's in all but total screen time. The turbulent marriage is played out like many a melodrama, in that it is doomed when words are uttered in anger and revelations that are not retractable come to light, with the two of them reaching breaking point upon the announcement of a pregnancy and the meeting between Cleva and Chaney's deaf mute parents. On the subject of which, it is gratifying to see no subtitles when one has come to expect them to be used for anything other than the Queen's English. Chaney's parents need no such explanations as the acting of the tender scenes between mother and son are exquisitely delicate in the nuances conveyed by their sign language and their expressions to one another, that the meanings are never less than clear.


Pevney's direction is consistently adept. He allows the performances to speak for themselves, giving a sense of freedom and fluidity to proceedings. It helps evoke the emotions of being swept along in the current of this man's life, as so many were, merely an orbiting object, a footnote to his main tome of achievements. I've read and heard numerous appraisals of this film prior to watching it. Some fall squarely in the category of being unable to suspend their disbelief at the age of the actor playing Chaney, whilst others criticised the film for its inevitable factual inaccuracies. Personally I found neither of these to be flaws. True, a younger actor could have taken the role but, as this is the tale of a man's life from early career to the very end, said man would have had to hide his age at one end of the spectrum anyway. Either they went with a man who'd have to pretend to be younger, or older. Cagney puts in such a spellbinding turn that, to be frank, I find it hard to imagine the part being played to such a high degree by anyone else. Being a fan of the actor helps, but in some ways it was just as likely to be a drawback. Being so used to seeing him tightly coiled with a menacing glare in his better known roles, that to witness his comic turns on stage and juxtaposing ringing screams as the hunchback was just as likely to grate against my pre-existing expectations of the man to a negative effect.

The factual errors are also a moot point in my opinion. Surely we have all come to expect the truth to be massaged in such a way. Anyone who has managed to sit through the propaganda of JFK or not questioned the racist cop character (played by Dan Hedaya) in The Hurricane will no doubt be able to attain an infinite amount of pleasure from this period biopic. The two previously mentioned films were guilty of trying to create a single sided story by playing down a persons flaws and heightening adversity respectively. I hardly expect a Shakespearean to dismiss Henry V because any speech he may have given at Crecy wasn't likely to have been as erudite as the play's depiction. It has also been a criticism levelled at Man of a Thousand Faces that it is too one sided in its analysis of the life of Chaney. I'm afraid of all the problems one might have with this film, this is the one that seems the most absurd to me. If this were true, I feel like I may have been watching the wrong film, as at no time is Chaney held up as a paragon of light. Throughout the feature he is portrayed as incredibly stubborn, driven in his career to the point of ignoring his wife and at times an uncaring brutish ox of a man. These moments are punctuated by those of his great acting and his devotion to his son but ultimately he almost destroys his relationship with him - the person he cares most for in the entire world. This is far from an all round standing ovation to the man's goodness but rather an appraisal of what drove him to become one of the most evocative and transformative performers of his era.

Very much a tale of two halves, Man of a thousand faces, like most biopics of famous or influential individuals, contains a distinct turning point regarding pre and post success. There are other key moments throughout the film, which have more effect on the man's psyche and his turbulent relationships. However, the change of tone and the development of our insight of him, from his early personal life to that of behind the scenes of films lodged in our collective consciousness, is the most visible. Whichever side you prefer, there's enough depth here for any film fan or indeed those who know little of cinema history. It is far from perfect and falls very much in the mould of a melodrama but nowhere near as sickening in its attempts to pull at the heart strings as many similar films of the time. If you're a fan of Cagney or the craft of acting this remains a remarkable central performance that demands to be seen.

PS - I'm sure many will enjoy watching out for a young Robert Evans and the man who voiced Mr Magoo.