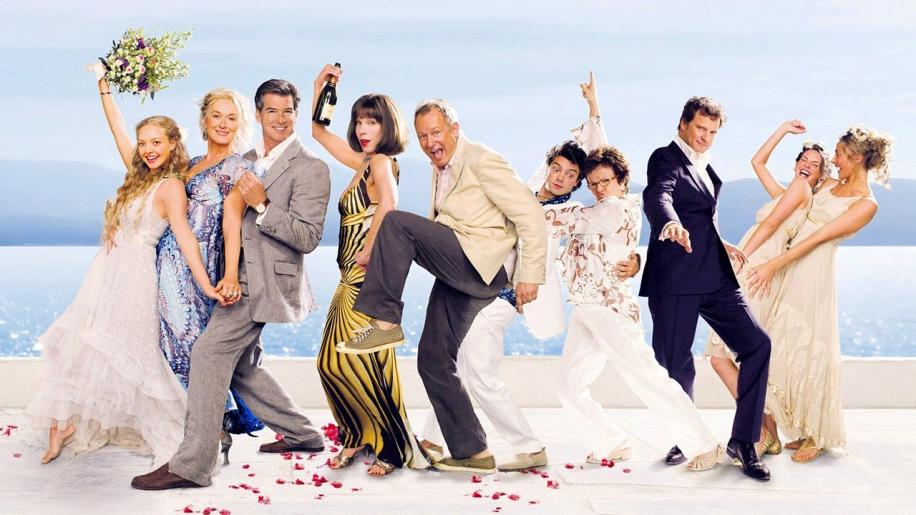 Let's be honest here. A significant proportion of the readership of this review (realistically mainly male and a certain age) are going to reject this movie out of hand. After all, ABBA were never exactly “cool” even in their heyday - and the musical isn't exactly the most masculine of genres. Even I, being happy to admit I liked ABBA way back when the original vinyl sat on my shelf as a 10 year old, had severe doubts about this enterprise. I love ABBA and I love musicals, but the idea of basing a musical around an existing song catalogue is an anathema to me. Queen is one of the best bands there has ever been, but the musical “We Will Rock You” is, quite frankly, an embarrassment. That is why I would never consider spending £50 on a ticket to see “Mamma Mia! The Musical”. Offer me the chance of seeing the movie for the cost of a cinema ticket, however, and I was there. And I enjoyed it so much, I was there a few months later for the Blu-ray disc.

It is hard not to get swept away by this film. The story is probably familiar to most of you by now, but for the few of you who have been living on Mars recently, here is a brief synopsis

Sophie Sheridan (Amanda Seyfried) lives on a Greek island with her mother Donna (Meryl Streep). Money is tight, but when Sophie decides to get married to Sky (Dominic Cooper) all the stops are pulled out to ensure the wedding party is spectacular. There is one problem, though - and that is that no-one knows who Sophie's father is. When she finds her mother's diary, and reads about a romance filled summer with three different men, it becomes clear that one of them is her father. Without telling her mother, she invites the three to the island to attend her wedding. Thus, Sam Carmichael (Pierce Brosnan), Harry Bright (Colin Firth), and Bill Anderson (Skellan Skarsgaard) all turn up for the festivities. Two more major characters, Rosie and Tanya (Julie Walters and Christine Baranski) turn up as friends of Donna - they used to sing with her in a band called Donna and the Dynamos. The film is taken up with the characters' attempts to connect with one another, find out who is Sophie's father, and as a by product of events going on finding love. The ending is also rather a surprise, but I will not go into it here for fear of spoilers.

But like all films of this type, the plot is not deep or convoluted. The fun is getting to the conclusion, which unusually for this type of film is not signposted from the beginning. For a film such as this to work, the characters have to be likeable, the songs have to genuinely fit in with the story, and the performances have to be solid. In all three areas Mamma Mia! delivers.

The reason, I think, why this film has been so successful is that everyone just seems to be having so much FUN. Yes, it is true that some of the singing is not entirely brilliant (Brosnan, I am looking at you) but that is part of its charm. They could have got genuine singers in to play these roles, or even dubbed the actors in post - but the very fact that these famous actors are prepared to take the risk of singing on celluloid is typical of the atmosphere the film is aiming for. If the main actors are singing with this much enthusiasm and gusto then it is very hard as an audience to not feel some of that coming off the screen. You may start by wincing, but very soon the cumulative effect is one of involvement - it is real, and it adds a sheen of realism to a film that is not overly concerned with this factor.

Another reason why I think the film is so successful with people of my age (pushing 40) is that the underlying message of love being for all ages, types, and sizes is a very persuasive one. There is an undercurrent of sadness here - notably in the very moving ”Our Last Summer” but despite this, every character finds their happiness. Whether it is someone of a certain age, someone who had true love and lost it, someone whose sexuality is of an “alternative” nature, or even someone who is fooling around with someone much younger - all brings true happiness to the protagonists. You are genuinely left feeling that it is never too late to find the happiness that love brings. Yes, that may be a cliché - but it is beautifully conveyed in this film, and that is perhaps where it is at its cleverest.

I also mentioned in the first paragraph that a musical based around existing songs is not an idea I am comfortable with. This was always the case up until now, but the songs you know and love are fantastically integrated here. The aforementioned ”Our Last Sumer” and also ”When All Is Said and Done” are substantially retooled from the originals but they work so well in the context of the plot. They are really quite moving. Other songs are more faithful to the originals, but however they are presented they all fit in perfectly with the story. I have already mentioned Brosnan's singing - and he is certainly the weak link. However, none of the actors are particularly bad with their singing. They are all in tune, and manage to convey the emotion of the lyrics well. Particular mention, however, should go to Seyfried and Streep who are both outstanding.

So - is this the perfect film? Sadly, it isn't. And the reason for this is the direction. The director (Phyllida Lloyd) was chosen for her familiarity with the source material, rather than her directorial abilities - and sadly it shows. She had previously directed the stage show but has no previous movie directing experience. She brings a certain naivety to proceedings but this is not as winning as the actor's attempts at singing.

She has no flair or imagination when it comes to moving her camera, and directs in a very pedestrian manner. Sadly, the one thing that does seem to be lacking from the film is a true sense of energy. The only time that the director attempts to convey this is during the Voulez Vous sequence - but even here she falls back on motion effects rather than energetic camera movements. The sense of continuity is also lacking, most noticeably during the Does Your Mother Know? number - which is all over the place.

The simple fact of the matter, though, is that despite these flaws Mamma Mia! is a really enjoyable movie that genuinely manages to leave the viewer with a smile on their face. If you avoid this movie due to preconceptions, then you are missing out on that rarity - a truly life-affirming movie. Mamma Mia! has great music, winning performances and an involving story. A story so enjoyable, that the sometimes shoddy direction cannot spoil it.

This is the rare disc that can truly appeal to the whole family, and that can also stand repeat viewings. Highly recommended.