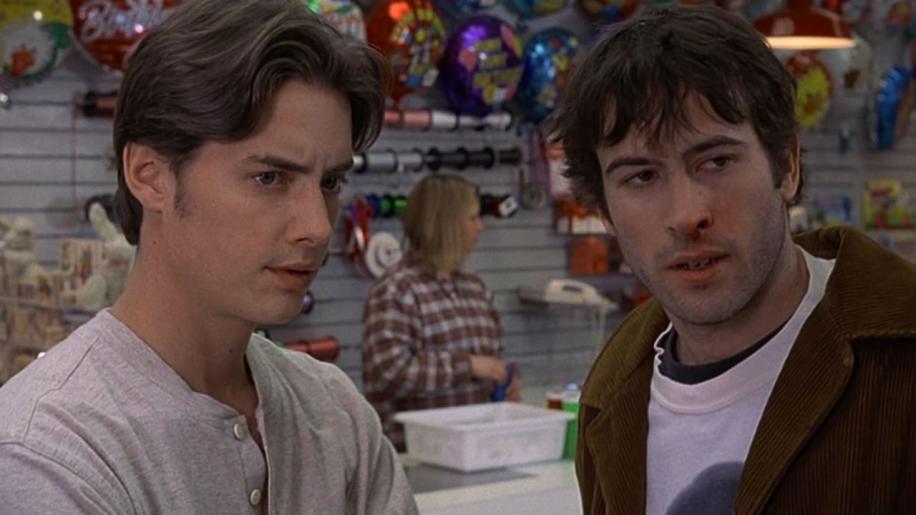 Has it really been ten years? Is ten years even long enough to call a milestone? Well, in the world of DVD apparently so. Just recently there has been Pixar's Toy Story, a truly ground breaking film and one, due to technological advances, deserving of its tenth anniversary. Then we have Mallrats. A film that bombed when it was first released in 1995, but has managed to forge a huge slice of the home video market, becoming ever popular, to some, attaining the highest of all praise; cult status, remarkable considering the films genesis. Its writer and director Kevin Smith made his debut with Clerks a zero budget film, filled with his friends, that was so well written that it caused a storm. On the basis of this film alone, Smith and his producer friend, Scott Mosier were given six million dollars to make a “smart Porky's”; their idea to fictionalise characters they had seen in the Mall; Mallrats. A small idea, perhaps, but Clerks had worked so well with its own 'small idea' no one questioned it. Neither did anyone question Smith's director skills, once again Clerks paved the way, all were enthusiastic, all were hopeful, no one considered failure an option, something much discussed during this new edition. The original collectors edition release of Mallrats in 2003 was an already comprehensive disc containing something like an hour of deleted scenes; scenes removed by a studio editor, this being the only film not cut by Smith himself. The brief, therefore, for this new release was to re-edit this additional material back into the film, to make the 'directors' cut. However, due to his own inexperience with the original filming, and lack of coverage and alternate shots, Smith soon discovered this to be an onerous task. However, after enlisting the help of Mosier, they have produced an extended version of the film, which contains the alternative opening and many scene extensions, yet consistently refer to it as the 'version that should not have been'. Thankfully both theatrical and extended versions are included in this set giving all the best of both worlds.Theatrical cut

T.S. (Jeremy London) wants to take Brandi (Claire Forlani) away to Florida, with the intention of proposing on the Jaws ride at Universal studios; however due to complications arising with her fathers new cable TV show, Brandi has elected to stay and stand in for the girl that died. This does not sit well with T.S., they argue and eventually split up. Meanwhile Brodie (Jason Lee), a Saga and comic book fanatic is also having a strained relationship with Rene (Shannon Doherty), his girlfriend, she feels, rightly so, she is being taken advantage of and decides to break up. The two friends try to console each other at Brodie's basement and deciding they need a change of scenery head off to the local Mall.

Once there T.S. does nothing but pine for Brandi, while Brodie waxes lyrical about such diverse subjects as whether or not the Cookie stand constitutes part of the Food Hall and tries to dissuade Rene from seeing Shannon (Ben Affleck). Another distraction is the fact that the Mall is playing host to Brandi's father's new show Truth or Dare (a blind date rip off), the pair hatch a plan to sabotage it thus causing a potential reconciliation between Brandi and T.S. To do this they enlist the help of Jay (Jason Mewes) and Silent Bob (Kevin Smith) that come up with ever 'ingenious' plans to cause havoc and destruction. Other friends they meet during their day are Trish (the dish) (Renee Humphrey) compiling data for her book about the sexual prowess of the nineties male, Gwen (Joey Lauren Adams) an ex-girlfriend of T.S.'s and Stan Lee, the comic creator. Due to the ineptitude of Jay and Silent Bob's attempts at sabotage, Brodie suggest to 'stink palm' Jared Svenning (Michael Rooker), Brandi's father, because of his unwavering (and unexplained) hated of T.S. the culmination of which sees them ejected from the Mall. After an epiphany from a topless psychic in another Mall, the pair return to fight the good fight and reunite themselves with their respective girlfriends. They do this by placing themselves on the contestants list of Truth or Dare by asking Jay to discombobulate the real contestants, he does so by drugging them. Once there and after the obligatory and rather obvious speeches all ends well, now, and for the future; all get their just desserts.

There is something not quite right with Mallrats, it is puerile and daft, but this is not its downfall, rather it is a small ditty trying to make it in the big world; it doesn't quite manage it. Smith himself identifies that trying to force the Clerks demograph onto Mallrats with its altogether bigger feel is ultimately what cases a lot of the problems. Smith's inexperience as director was responsible for his extremely static camera, most of the scenes are two shots with a long lens and whilst this seemed to work well with, say, Monty Python's The Holy Grail, here it just seems too static. Plus the film is extremely talky, filled with the type of monologues that Smith is now famous for, and whilst that worked well within the confines of Clerks, here is just seems as if people talk too much. The side scenes with Jay and Silent Bob, whilst hilarious in a Wile E. Coyote sort of way, are actually a radical departure from their established personas, Jay is no where near as offensive, and the pair come off comical (foreshadowing their comic perhaps?). Possibly the most offensive, and consequently funniest part of the film is the 'stink palming', Universal vetoed the 'come in the hair scene' at the scripting stage sighting it was far too offensive, yet Something About Mary three years later seemed ok with it. Yet its monumental failure in theatres is matched only by its colossal success as a home video/DVD. And I agree, this film does work as a DVD, something about the puerility works on the home viewing. All the faults that are so apparent in a 'film' are somehow quashed on DVD and the 'innocence' of the performances shines. Whether intentional or not there are some direct references to Chasing Amy, Smiths next project, the pining for love lost, the entire Stan Lee speech to Brodie, all could have come from that film, and it is these areas that raise the film for me. Flawed, perhaps, but a laugh, definitely.

Jared Svenning is fawning over the Governess at her annual gala evening, he wants the money she promised him so he can form his own TV show. She is guarded by two, efficient, if over handed body guards trying to stay on her good side, a difficult task considering she is drunk. Meanwhile on a building overlooking the event Brandi is finishing off her science project, looking through a telescope, when T.S. turns up, dressed for the historical re-enactment in colonial soldier ware complete with musket. T.S. brings up their trip to Florida, but Brandi has decided to help her father with his new show, T.S. is incensed, and Brandi dumps him claiming that he and her father treat her like a possession. In the ensuing struggle, the musket gets caught in Brandi's hair, as the pair struggle near the edge of the building, the musket is spotted by one of the governors bodyguards, causing a shoot out. In the aftermath, the governor, injured, declines the money to Jared, causing an irreparable rift between him and T.S. The following morning, T.S. arrives at Brodie's basement, being hounded by paparazzi, only to find out Brodie too has been dumped. The boys stop off at Brandi's (T.S. to talk, fruitlessly; Brodie to cause havoc and mayhem with the paparazzi) on their way to the Mall. From this point on, the two films run practically the same, the extended version diverging with scene extensions that reference the opening or extra exposition/nonsense depending on how you stand on Smith's writing.

This opening is familiar to all those that already own the earlier version, as, in fact, are most of the scene extensions as they were include in that disc's deleted section. To see them as they are meant to be seen and in context adds little to the film, if anything by extending the run time to two hours the film becomes somewhat harder to watch. The opening scene is frustratingly long and completely static, quite honestly, it is boring; and much of the additions are the same. Smith and Mosier are quite candid about this version, sighting the studio version as the best the film could ever be considering the limitations of the source material. All the additions just slow it all down, reducing the already leisurely pace to a snail's crawl; not necessarily bad, but as a comedy a tighter pace makes for a far better film. It truly is the 'version that should never have been' and now that we can all see it, we too can make the same judgement; but as a tenth anniversary edition this is an excellent marketing tool. Fans will no doubt wish to see this version and compare, along with the new extras this is a welcome disc.