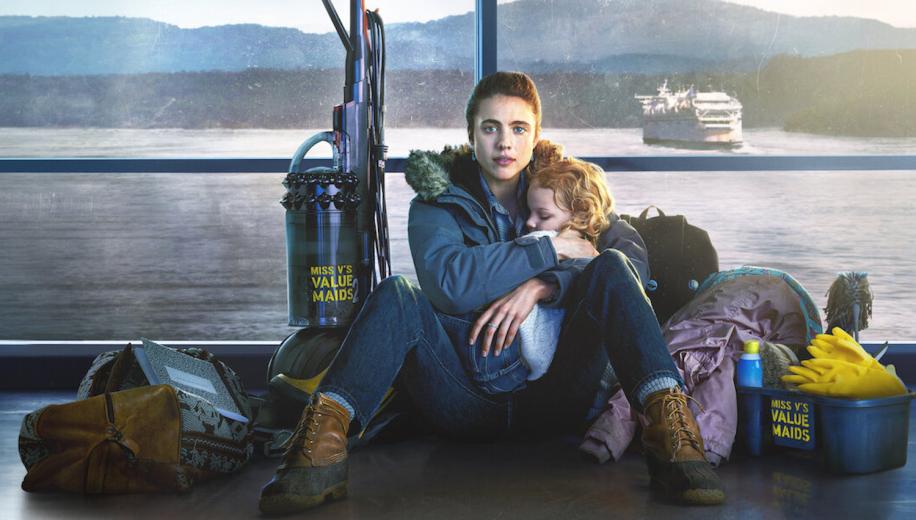 Another sleeper TV gem from Netflix following on from the hit Squid Game, Maid balances weighty issues with a naturally inspirational cadence and is unmissable viewing.

Netflix is on a roll. After Squid Game rightly took the world by storm - and hopefully lit a fire under those who have put off watching the excellent Kingdom - they dropped the part-glossy, part-kitchen sink drama Maid onto unsuspecting audiences, delivering a level of pathos in a stylish show that's driven by a fabulous lead performance. It may not be on your radar - US productions aren't always known for hitting the kind of gritty depths of the likes of Channel 4's Help - but Maid does a superb job of maintaining spark and momentum across an entire long-form 10 episode run, whilst hitting some pretty tough notes in the process.

... delivering a level of pathos in a stylish show that's driven by a fabulous lead performance

Reaching her breaking point, young mother Alex grabs her two year old daughter and ditches her trailer home to escape the blackout behaviour of her boyfriend, presuming it would be possible to get some help from the State, but finding an increasing number of impossible hurdles to jump - from proving income before you can get income support to getting a job before you can get supported housing, with legal issues around custody being ludicrously punitive towards those who don't have the money to pay for a lawyer. With a fractured childhood herself, and two unreliable, separated parents, and the weight of her boyfriend's angry family brought down against her, Alex had no idea that merely wanting her daughter to be safe would be such a tough mission to accomplish.

Maid enjoys a surprise real-life mother-daughter performance at its core, headlined by Margaret Qualley (you may recognise her from the excellent The Leftovers, or on the Big Screen in Once Upon a Time in Hollywood) in the lead role of Alex, with her mum played by her real-life mother Andie McDowell. McDowell enjoys some of the best work she's done in years - if ever - as the undiagnosed, untreated bipolar mum that is often the last person Alex wants to rely on for help, but also the only person she can turn to. Billy Burke plays her dad - with his own issues - and Jurassic World's Nick Robinson is the boyfriend, who is far from just the villain of the piece, however much you want to just hate on him.

Indeed, there are a whole slew of solid supporting performances including Raymond Ablack's Nate channelling John Krasinski's Jim from The Office throughout, and Aimee Carrero's Danielle who steals every second of her cameo. However, this is absolutely Qualley's baby through and through, delivering a fabulously rich lead performances as her character runs the gamut of emotions from stunted, devastated and emotionally destroyed through to peppy, determined and possibly even hopeful, with her picture-speaks-a-thousand-words reaction to almost every ludicrous benefits or custody hurdle really emphasising the impossible situations her character faces at every turn.

... unmissable viewing, no matter how many times you find yourself forced to turn away

Maid really goes into a downward spiral into hell for the first few episodes and, for every one brief spark of hope, almost two further disasters spring up to maintain the pressure for Alex to crack. If it had been a Brit production, it would have likely gone the Ken Loach / kitchen sink approach, and pounded you into the ground, but there's a flair, style and zest to Maid (not a million miles away from Help by way of Hustlers) which keeps you from getting too suicidal. Clever ostensible gimmicks like an ever-decreasing running total on cash, or a superb language change during courtroom scenes, afford knowing digs at the impossible situation, as a very modern, accessible commentary on what it means to be poor and struggling. And Qualley, despite being veritably capable of glamming up, is very convincing in the role, giving legitimacy to the trailer-dwelling housing scenarios, and walking the audience through the messy journey she must undertake. It's unmissable viewing, no matter how many times you find yourself forced to turn away, handled surprisingly well considering the missteps they could have made, and capable of celebrating a multi-faceted characterisation that's far from as simple as just a 'victim', portraying a succession of choices, and the reasons they were made, and then the struggle to live with each and every one of them, for good and bad.

Maid is out now on Netflix, with all 10 episodes available to stream.