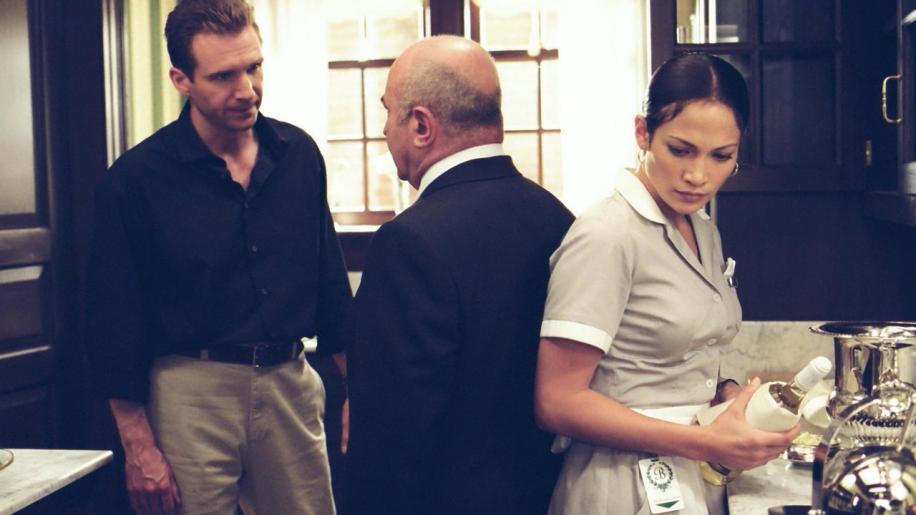 Wayne Wang has had brief success with a couple of his features, notably Smoke and The Joy Luck Club then in 2002 he was put at the helm of Maid in Manhattan another vehicle really for Jennifer Lopez to gain more exposure on top of her already blistering musical career, perfume lines, film and television appearances.

Marisa Ventura (Jennifer Lopez) is a maid at an exclusive Manhattan hotel, as well as holding down a full time job she has her young son to look after, a 10 year old whose main interest is studying the writings of Richard Nixon. On one of her shifts she is persuaded by a colleague to try on a resident's $5000.00 outfit; when she's all dressed up with nowhere to go she's interrupted by Christopher Marshall (Ralph Fiennes). Marshall, a budding congressman, who is immediately besotted by the gorgeous Marisa and offers to walk with her in the park.

It's not long before Marshall tries to get to know Marisa a little more, Marisa however fearing repercussions from her employers for tinkering with resident's belongings tries in vain to keep a low profile. Ultimately the game is revealed, Marshall finds young Marisa is one of the hotel's maids. Marisa has tasted part of a life she never dreamed she would ever encounter. Can these two hit it off through the class divide?

When this film was initially released it was more or less ridiculed for the wafer thin plot and one dimensional characters which it portrayed. Time has not been kind to Maid in Manhattan though and the derisory comments which followed its release have not wavered, and in all honesty why should they? Maid in Manhattan, like so many vehicles before it where so called pop stars are trying to gain a footing in Hollywood, is nothing more than a means to an end; that end to get Jennifer Lopez's face a little more known (if that was at all possible) and to give her another medium in which to make vast amounts of money. She can't really act, as this film and those before and after testify, and she has little on screen presence as a love interest. It was interesting when her character was discussing the class divide and how the political machine doesn't really understand the needs or desires of the poorer communities and this I feel she might have some purchase with. She should though once and for all give romantic comedies a miss because this film is neither romantic nor comedic in its execution.

Maid in Manhattan is just a reworking of the often used Cinderella story, the poor little girl who has a brief glimpse of the high life only in the end to finally fulfill her dreams, of not necessarily moving into that world but grabbing her man who will give her a free ride to fame and fortune. This story has been told time and time again throughout Hollywood history and none really that worse than what we've been offered here. It adds nothing new to the concept, nor does it add anything to the romantic comedy genre itself either.

As mentioned before Jennifer Lopez can't really act so you can understand her being in a little film like this but there are two incredible UK actors here as well and it's baffling as to why they even considered being in this production. Ralph Fiennes, currently doing the rounds as a deliciously evil Lord Voldemort in the Potter series, must be spinning in his grave and considering he's not yet passed away that quite damming indeed. It's perhaps only fitting if he wakes up with haunted nightmares thinking of the substandard work he put on celluloid. Equally English stalwart Bob Hoskins, playing the floor butler Lionel Bloch, has little to do here other than gurn his face up a little every now and again. His best scene a speech near the end where he shows that even though he serves people he still has pride and does not regard himself as a servant. However a 20 second scene really isn't what good actors are looking for.

Maid in Manhattan was written by John Hughes and I have to admit that Hughes was responsible for some of my favourite features from the Eighties. Who can argue with the quality of The Breakfast Club, Planes Trains and Automobiles or Ferris Bueller's Day Off? Three wonderful pieces of work in a sea of popular writing which included numerous other films which the movie going public thoroughly enjoyed. After Home Alone though he seemed to go downhill pretty much rapidly churning out the same staid material time after time. Not producing new works of writing per se simply regurgitating the same old plot lines for sequel after sequel. So Maid in Manhattan has really continued this downward trend, either that or its transfer from written work to screenplay went woefully wrong.

I really don't have much else to say regarding this film, I never enjoyed it and found little other than Hoskins' 20 second speech enjoyable. If you do then kudos to you that you managed to find some gleaming light in there. Rental at best even then only go for it if there's little else to choose from.