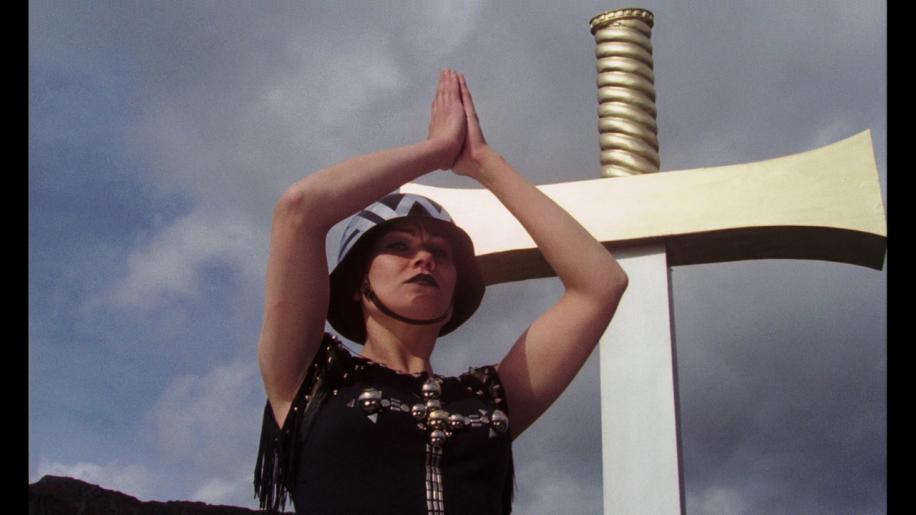 “Why is everyone so literal these days? I was speaking metaphorically.”

Whilst I admit that I came into this film knowing absolutely nothing about real-life Austrian composer Gustav Mahler, I did have enough skin-crawling recognition of the movie's writer and director, Ken Russell, to realise that I could be in for some avant-garde pretension, with at least enough sleazy set-dressing to help while away the running time. I mean, despite having such a thesping heavyweight as Robert (the ultimate screen-Nazarene) Powell as the titular Mahler, we have the coyly luscious Georgina Hale as his wife Alma. Now, I still remember the scene in McVicar when she stood doing the dishes with her back to Roger Daltry, wearing nothing but a small apron. That's Georgina in the apron, not Roger! I was only young and easily influenced but that mischievous smile she cast over her shoulder was an education in itself. So, I thought, there's going to be some surreal and sexy segments here, I'll bet. But little else of interest. Well, once again having my preconceptions mightily trounced upon, I found that, although, there was certainly a little of the former to spice things up, it was the rest of the oddly compelling drama that held the attention.

Set during an uncomfortable train ride with his wife, Mahler details the pivotal moments of the composer's life mainly through flashbacks. Quite clearly unwell and most definitely at odds with his long-suffering wife, the two attempt to draw the disparate and tragic strands of their relationship into some coherence. Prone to flights of melancholy - which apparently typified his music - Powell's Mahler begins as strangely aloof and progresses to almost purely obsessive in his striving to get that final symphony completed. No musical genius ever gets past their Ninth, we are informed and Mahler is still battling with his elusive Tenth. Fate does not seem to be lending him a helping hand. Around him, the myriad distractions - a noisy compartment, an inquisitive journalist, platforms full of excited children eager for a glimpse of the famous composer, bizarrely fatalistic dreams that plague him - conspire to tip the already paranoid and overwrought celebrity over the edge. The journey to conduct in Vienna is indeed make or break for the couple - especially so when Alma's lover, the exciting military Max, makes a final play for her heart, coaxing Mahler to let her go. The odds are certainly stacked against him but, as the story of his past unfolds, we can see that the seeds of his own destruction were quite clearly sown by his own hand.

“Tell them their music gives me the shits!”

With a great many metaphorical images and stylistic broadstrokes that can, at times, seem heavy-handed and blatant - none more so than the Jewish Mahler's conversion to a Catholicism to help his career via a warped mountain-top S&M session with a jackbooted Nazi dominatrix - we are treated to an often doom-laden atmosphere that piles tragedy upon every small moment of joy. And yet the film itself never feels pessimistic. Robert Powell's superbly mellifluous voice manages to gloss over the spiralling alienation he subjects his wife to, and the oddly distanced relationship he has with his two young children can occasionally feel quite touching for all his brusqueness. That his closest bonds are with his fellow composers and musicians comes as no surprise and there is genuine concern for a friend and professional rival who has, quite literally, gone mad with his failure to procure the fancy position of Director of the Court Opera. A job that Mahler, himself, seems sure to gain.

In a film that takes a deliberately abstract and skewed view of the biographical genre the many moments of intimate personal angst are dealt with quite effectively. Though obviously theatrical in mood and performance, the movie nevertheless, possesses a great many scenes that hide a terrific power behind a veil of subtlety. Look at Georgina Hale's face wilt as Mahler and one of his buxom opera singers openly mock and belittle Alma after reluctantly singing one of her own songs. The pain of being cut off from her own musical talents is worn convincingly - her trademark naughty pout finally slipping. In fact, it is Hale who is the revelation. She offers up a vulnerability behind the playful tease of the early passionate years of endless summer beside the lake and, subsequently, the stoic mask of much later on when it appears that love has all but dried up. And yes, she does get to perform some high-brow high-jinx - cavorting in stockings and suspenders atop Mahler's dream coffin and, shortly afterwards, engaging in a crazed orgy with Max and his Third Reich-attired goons before Mahler's disembodied eyeballs, which have somehow survived his own cremation. Sequences like this and the afore-mentioned craggy mountain conversion via flames, whips, fishnets and a severed pig's head are a hoot. Over the top and glib maybe, but stylistic flourishes such as these are necessary in a Ken Russell picture.

“I conduct to live. I live to compose.”

And what of the shouty, crimson-faced South Bank Show Awards disrupter then? Having long been an acquired taste and certainly having lost a number of fans in recent years, I found his approach to the subject matter here actually quite accessible. I mean, to be honest, a straight forward biopic of an Austrian composer that I'd not heard of would never normally appeal to me in a million years. But Russell manages to inject a wild streak into the proceedings with the many dream-passages and an often quite witty script. Even the lengthy scenes of Mahler's troubled childhood with a family struggling to raise the money to educate him to the musical standard they know he can attain, with a terrific turn from Gary Rich as the isolated youth, have a lyrical leaning to them. Although this segment actually contains the most linear narrative of the whole movie, it also has the wonderful re-awakening of the boy during a dawn-chorus walk through the woods. Arguably, the film is at its best when in these early character-establishing scenes. Although, later on, when another tragedy befalls Mahler, there is a hauntingly poignant moment spent at the piano, that Russell plucks out of nowhere to tug at the heartstrings. Also worth mentioning is the photography by Dick Bush which, despite never managing to fully shrug off the inherent staginess of the whole thing, even with its lakeside views and mountain ranges to widen up the proceedings, contains some lovely woodland tracking shots, jump-cuts and spinning cameras. Shirley Russell (not sure if that's a relation or not) provides some lavish costumes, including the kinky stuff. And let's not forget the wonderful score which appears, in the main, to be Mahler's actual symphonies. If you like this kind of powerful and dramatic classical music then you will be in heaven with this movie as it plays almost constantly throughout. Performed by the Concertgebouw Orchestra of Amsterdam, this would indeed be a terrific showcase for the composer if the disc was up to it ... but more on that later.

So, folks, Mahler has a few tricks up its sleeve. Does it consign a man's life-story to an almost operatic farce? No. it makes a subject matter that could forgotten or worse, ignored, into a roaring, extravagant swirl of sound and image. I can't say how historically accurate it all is, but as a depiction of a tortured genius and the emotional devastation his pursuits create it all seems to gel quite spectacularly. Good performances all round, particularly from the two leads, a less contrived air about the enterprise than you might expect and, ultimately, an interesting and moving study of a complex man. Far more involving than I had expected.