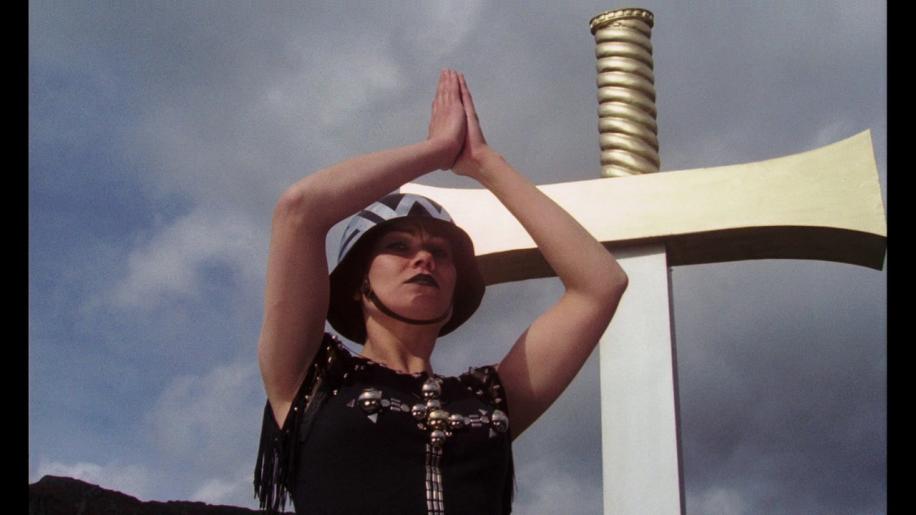 Now, this is a really mixed-bag. Released in what appears to be a cropped full-screen 1.85:1, with the sides slightly taken in, FreemantleMedia's disc contains a fair degree of print damage. Struck presumably from the original 1974 master this is perhaps unavoidable and, whilst there are scratches, flecks and some other general wear and tear flitting about the image, I have seen far worse damage than this. But the problems go much further, though. Colours are muted with the scenes set within the train carriage suffering most of all, the ill and cadaverous Powell sometimes disappearing altogether. The heaps of visible grain play their part in this vanishing act, too. Blacks often appear very grubby, thus diminishing the contrast level somewhat - but, having said that, this effect is actually quite inconsistent with some scenes looking much better than others. For instance, the childhood scenes contain a nice sense of depth with rewarding blacks, as do the one or two moments set at night-time in the woods, yet later on, the dark corridors of the asylum or the all-important train compartment with the blinds pulled down, are relegated to a mushy and ill-defined greyness.

Close-up detail is quite decent, however. There is some nice embroidery on his father's cap, for instance. The Catholic conversion scene looks pretty good too, with the gleam on a newly-forged sword and the wildly diverse expressions on the Nazi-babe captured effectively. But once again the backgrounds suffer for all this, losing all clarity with a fuzzing up of edges. The pebbles behind the young Mahler on the lakeside become a shimmering mess and the distant hills and trees just blurs. The campfire is washed-out and subdued, lacking the vitality needed for that particular scene. There is even some faint trailing in the wake of the odd brighter object. But the worst effect of all comes when Mahler's two little girls show him some religious illustrations in their book. Lingered on for stylistic purposes these are a right mess of warped phasing and blurring. On a big screen I could well believe that this effect could cause an epileptic fit - the strobing is literally eye-boggling. But, apart from this last DVD gremlin, the other distractions can be lived with if you are a fan of the film and shouldn't necessarily put you off unless you know of a better transfer out there. From what I can gather the Region 1 is identical, though. Released with an English Dolby Digital 2.0 Stereo mix, Mahler sadly cannot hope to reach the heights that the composer would have desired. This actually plays more like a 2 channel mono with next to no separation allowed to creep in. When boosted up through ProLogic II and with a few further tweaks of the set-up I was able to slightly widen the soundfield, but really no amount of tinkering made that much difference. The soundtrack offered here is full of pops and crackles and the voices, although clear, are slightly tinny. A fair bit of hiss is allowed to mar the quieter passages, too. There is no subtlety, nor ambience. But, on the plus side, the centre speaker has a lot of stuff quite aggressively channelled through it and the score does pack some bombast into its delivery but, overall, this is a disappointment. Fans of the music should look toward the DVD-Audio release of the Mahler Symphonies performed by the same orchestra who supplied the wonderfully bravura brew that punctuates this movie. All things considered, you can still feel the power of the music with this release - it's just nowhere near what it could have been with a half-decent makeover. We get the original theatrical trailer and that's your lot. And this particular one is of the lengthy 70's style so it is ponderous and overlong - 3mins and 20secs too long! It doesn't do a particularly good job of selling the film either. Well, given that its subject matter is perhaps a little marginalised, its director known for pretentious pap and its appeal is therefore rather limited, I was surprised to find that I actually quite enjoyed Mahler. It does help to have the great Robert Powell lending a bit of authority to the tale and then that terrific turn from Georgina Hale, but then the offbeat angle and surreal flavour of the film actually enhance what could have been trite and, in all honesty, boring as sin. The music, although I'm not a fan, has an incredible power to it and serves the film perfectly, as it should. The imagery, full of religious and Nazi symbolism was more amusing than shocking and script is peppered with some good lines, albeit in a very theatrical kind of way. However, the disc presentation is hardly going to win anybody over. Fair to terrible visuals and a sadly underwhelming audio mix do not do the movie justice. And then you have nothing extra to liven up the disc apart from an appalling trailer that plays more like a truncated version of the movie than a promo. So, in a nutshell, I like the film and, although not to everyone's taste, would recommend it for the more than decent performances. But the disc sadly fails to ingratiate with lacklustre presentation and zero added value to offer temptation.