Magic: The Gathering - Duels of the Planeswalkers 2014 Xbox 360 Review 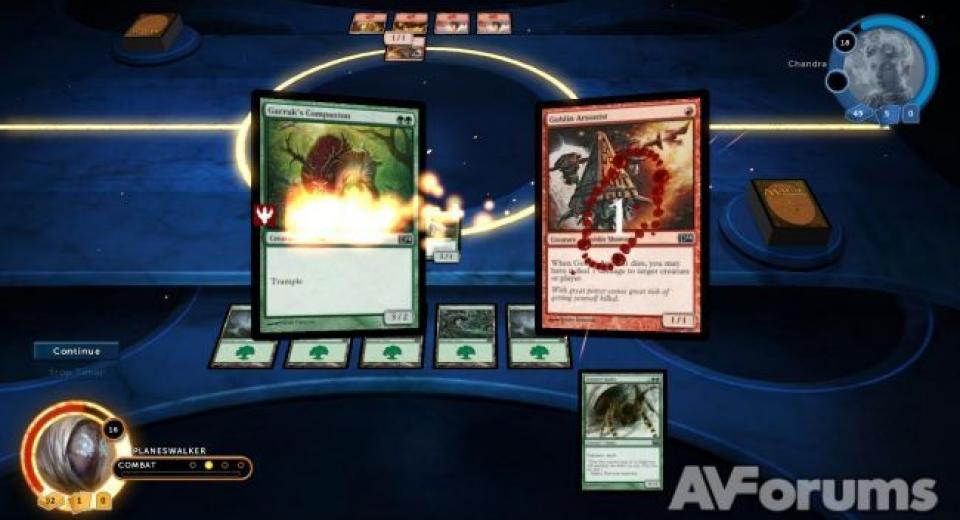 For the uninitiated and those of us that simply turned a blind eye to Magic: The Gathering’s success over the past two decades, the prospect of picking up a deck of cards and duelling with another player can be somewhat daunting. This is a game that seems incredibly complex, full of arcane symbols, counters, stat boosts, instant attacks, cards that can be stacked or turned sideways during distinct phases of play, and a huge variety of tactics bearing unintelligible names. Even when setting aside penetrating the rules, a cursory glance towards the dark arts of deck-building, card collection and trading is more than enough to ward off the casual observer.

So the question for anybody in the same boat is whether Magic: The Gathering - Duels of the Planeswalkers 2014 is a good place for novices to start. In the interests of brevity, my experience with the Xbox 360 version suggests the answer is absolutely yes.

It turns out that Magic isn’t that tough to understand, and once you’re done with the Planeswalkers tutorial you’ll be itching to start taking on players from around the world. Whilst there are several advanced variations of the rules available for long-term players, the core experience is that of a one-on-one duel. The objective is simple: reduce your opponent’s 20 health points to zero by attacking with creatures and spells that are placed onto the battlefield on a turn-by-turn basis. Each card comes with an associated mana cost in order to be fielded, and creatures can’t usually be introduced and activated on the same turn, forcing players to think ahead and anticipate tactics for both attack and defence. In practice, the concepts of mana, summoning creatures and casting spells are straightforward enough to wrap your head around, but Stainless Games also gently introduces advanced concepts like blocking, instants, activated cards, “tapping”, equipment bonuses and all the other minutiae that make up Magic’s tactical framework. There’s a lot to take in of course, however the pacing and practical demonstration make light work of most of it.

But while the concepts and application of those basic rules are covered in suitable depth during the tutorial, bending them to your tactical advantage is only lightly discussed. This is largely because Magic’s core appeal lies in coming up with your own systems; your own favourite cards, attack and defence strategies, and your own approach to dealing with the many variations that come right back at you across the table. In that sense, the real heart of Magic 2014 lies not within the entertaining campaign mode that sees you pairing off against characters focussed on themed decks, but rather in ‘Sealed’ mode, which apes the real-world experience of mixing and matching booster packs of cards to build your own unique style.

You begin by opening a selection of foil packs and filling out your roster, before picking your favourite combination of cards (auto-select can be applied at any point), customising the box art and name of your deck, and facing off against a series of AI opponents that unlock further boosters to mix and match against your originals. By the end of the process you’ll have acquired a fairly fearsome lineup that can be taken online against other players, or alternatively the process can be started afresh in another slot, allowing multiple specialist decks to be acquired for those that want them. Once you’ve filled out two decks however, you’ll have to pump some cash into the game to unlock the ability to save more. And for those worried about playing a card game with a controller, Magic 2014’s interface appears to have been honed over multiple iterations to a fairly high polish. Commands are intuitive and the timer set to just the right length to spur players on without frustration, whilst the control layout feels natural after a couple of rounds. It’s not a particularly unattractive game either (the main campaign even contains some basic comic-style cutscenes), but I’m sure the console versions could probably have been configured to spit out a 1080p native resolution rather than the 720p that we’re left with here. If Virtua Tennis could manage that resolution over four years ago, I’m pretty sure that Magic would have worked out just fine.

Magic: The Gathering - Duels of the Planeswalkers 2014 Xbox 360 Review

As a newbie to the world of Magic: The Gathering, I’d have no hesitation whatsoever in recommending that anybody curious jumps in and gives Duels of the Planeswalkers 2014 a quick try. The tutorial is an excellent primer, and the basics of card collecting and deck management are handily portrayed in Sealed mode, which takes pride of place as the first menu option that should be explored. The slow pacing and tactical thought required to play online is built steadily through experience against themed AI opponents that hand out themed (and occasionally tough) tactical lessons, and by the end of things you just might want to check out the real deal.

That’s another bridge entirely though, and for now, Duels of the Planeswalkers will do just fine.