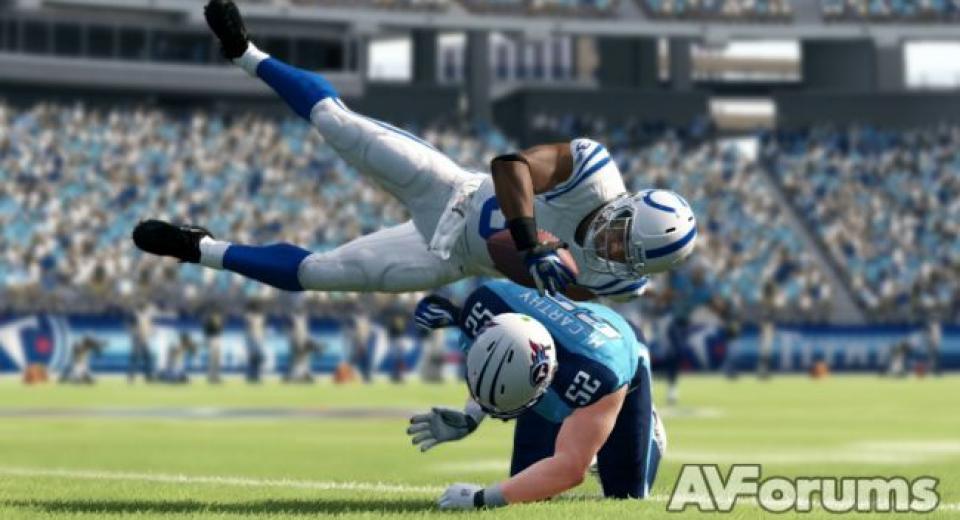 If last year’s Madden represented a franchise treading water and not entirely certain where the shore was, this year’s effort from EA Tiburon is at the very least making a concerted effort to swim in a direction. Much like stablemate FIFA with 12, the primary change in Madden 13 comes in the form of ‘Infinity Engine’: a fully-integrated physics simulation that’s supposed to imbue every collision with a sense of realism not seen before (outside of NaturalMotion’s Backbreakers, anyway). Although Infinity is undoubtedly a bold step towards a much better future for the only licenced gridiron sim in town, unfortunately it comes across as a little bit faltering in this first implementation.
That’s not to say it isn’t impressive at times, and especially in those all-important first couple of games. Although 13 still plays pretty much as Madden has for the majority of this generation, players now crumple and fold dynamically under heavy tackles, with no two collisions working out the same. My first running play, as an example, featured my halfback getting taken out of the game by the turned shoulders of an onrushing player that had just tripped over the legs of a blocker. It looked natural, and perhaps most importantly of all, it looked new, different, and entirely unpredictable. In these instances, Infinity adds a sense of weight and physical presence that’s often been lacking in previous titles. Although the team has done some brilliant work over the years introducing some monstrous gang tackle animations, branching points to break out of lengthy sequences and some great work on the audio side to emphasise collisions, there comes a point at which you see the majority of the box-features for the padding they represent, and the illusion wears a little thin. With Infinity onboard, at least the point of physical contact and the aftermath is mostly unwritten. Its problem however, stems from the fact it might have arrived a little early.
Simply put, it’s a little raw, entirely unrefined and prone to hilarious results with a little too much frequency to be comfortable. Limbs will often bend and skew at the sorts of vicious angles that’d make a Human Centipede squirm, players stumble around the field tripping over legs and arms as if they’d lost the ability to - you know - look down, and oftentimes the physics simulation can be a little ropey, with players flying several feet backwards on an impact that might have just about brushed the cup of coffee out of your hands this morning (if you were still a bit fuzzy).
Replays too (which are so much of the 'showtime' experience they really can’t be ignored) display a sort of inconsistency during those ‘freestyle’ moments, as if the traditionally robotic Madden animation engine is fighting underneath to regain control, resulting in weirdly jaunty movements for a fraction of a second before the physics take over again. It makes the slow-motion sequences just plain outlandish to watch at times, but in their defence, it’s never less than fascinating to witness the engine doing its thing; I don’t think I’ve skipped a single one yet. It’s probably also worth noting that underneath all of that new rubber-necking, Madden 13 plays in a pretty much identical fashion to the game you might have dabbled in for the previous couple of years - which is to say it’s slick, visually resplendent, entertaining, and about as highly-polished on the gameplay front as can be imagined without transitioning to an entirely new engine. It does appear to be rendering at a slightly muddier internal resolution this time around, but in play that’s a barely perceptible change - and presumably to accommodate the overhead of Infinity.
As far as gameplay subtleties go, you have a heightened ability to lead your receiver this year by pointing in a direction before throwing the ball, which is countered by a much easier timing window for interceptions on the defensive side. It’ll take a little while to adjust, but in practice those changes add a new layer of strategy to your QB play, forcing players to read the field a little quicker and throw away from coverage at every opportunity. In short, if you mess up it feels much more like it was your own decisions that cost, and not the sort of wilful AI abuse that occasionally cropped up in the past. Defensively, Infinity adds a layer of tactile response to tackling that just wasn't there before, so that side of things feels considerably improved (even though it's essentially the same mechanically). Presentationally however, 13 is a bit of a mixed experience. Whilst the TV-style overlays and visual bombast continue to creep closer to their inevitable event horizon (in an extremely involving manner, it has to be said), EA seems to have taken a leaf out of the 2K menu-design playbook, circa 2008-2009. The right analogue stick now controls your selection between tabs at the top of the screen, whilst the left controls your selection in the boxes underneath. On paper, that’s a brilliant use of the controller, but in practice (as any NBA 2K players will tell you), it’s mostly terrible. The general slowness of the menu system doesn’t help proceedings, and neither do the perceptible moments of lag as new information is fed in from external internet feeds or from elsewhere in the game.
As for how we'll be playing this year, most of the meaty gameplay modes have now been rolled up into one menu entitled ‘connected careers’. As it sounds, that fuses the online and offline career and franchise options up into one neat little package, and enables you to create your own superstar, play as a coach or a classic player and either stay offline or head online to join leagues with up to 32 other participants. The beating heart of Superstar mode still makes up the bedrock underneath, and you’re given a series of challenges and milestones to reach as you play, with stat boosts and traits available as the dangling carrots. It works well, too, although it can be extremely sluggish to begin with and it’s still got a way to go before matching up with the likes of MLB: The Show for pure immersion.

As competent as that overall experience is, there’s no getting away from the fact that this year is all about the Infinity Engine. Whilst it’s a brilliant concept and likely the jolt in the arm that Madden needs, in reality it may have been better to save it for next year’s new consoles - adding the wow factor and making the franchise shine again. The extra system headroom might have been enough to iron out those kinks, but that’s an experience we’ll have to wait for. As it stands, Madden 13 is an excellently playable and gawkishly entertaining sim, and gives us a solid glimpse of the future. For the most part, that’s very welcome indeed.