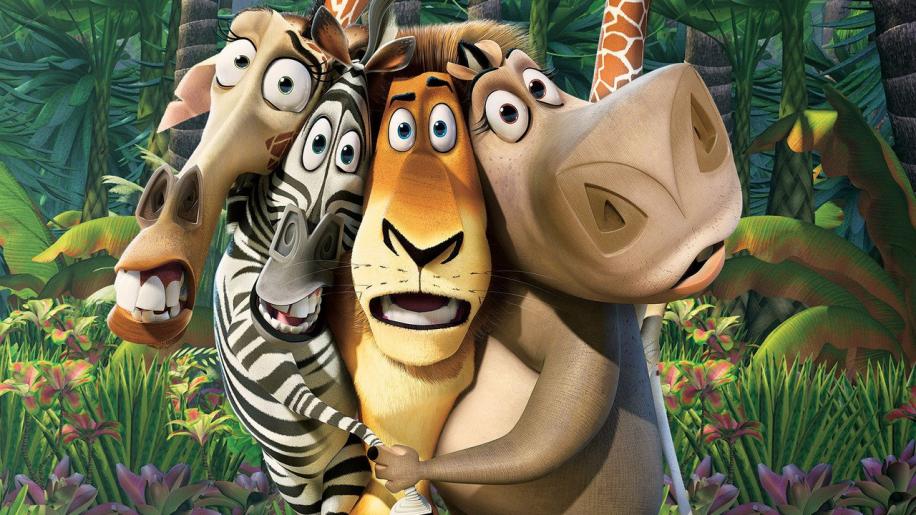 A motley crew of animals from New York's Central Park Zoo - Alex the showpiece lion, Marty, a zebra who dreams of a life beyond the bars, Melman, a neurotic giraffe and a sassy hippo called Gloria - take an exuberantly colourful trip into the wild jungles of Madagascar, their civilised city-folk attitude initially at odds with their new surroundings and much counter-culture fun and slapstick swiftly ensue in Dreamworks' new bright and breezy animated romp.

When Marty's aspirations to have a gander at the world outside his enclosure lead him to Grand Central Station, his chums chase after him and cause a riot akin to Kong's Manhattan debut. The authorities deem that these animal antics are too much for the zoo to handle and the escapees, including a penguin special forces unit (“We've been ratted out, boys.”) and a couple of erudite chimps, are packed off in crates aboard a freighter bound for a Kenyan safari park. But, with the penguins lending a fateful flipper of intervention as they hijack the vessel with plans for sailing to Antarctica, our four bizarre heroes find themselves washed up on the white sands of a veritable Club Tropicana, where the resident despot, King Julien, lord of the lemurs, decides that these “New York Giants” would be ideal to protect his tribe from a nasty bunch of hyenas. And that, folks, is about the size of the set-up, suffice to say that the plot's flimsy premise barely stretches to cover the formulaic personality-clashes, friendship breaking and subsequent rekindling that we've come to expect from such light, crowd-pleasing fare. Its success is all down to personal taste, but I suspect few people would deny that Madagascar, despite being a sublime visual delight, is somewhat disappointing. Although it seems to possess all the necessary elements, there is a staleness to the proceedings that severely compromises the heart and soul of its characters. That, and a sense of humour that raises only the odd half-smile and never a full laugh, relegate the film to a much lower status than might have been expected, which is unfortunate considering the thought and passion that has been channelled into the animation.

The hippy-trippy visuals make tremendous use of the island setting with some smart action, such as our mismatched heroes blundering through the foliage or battling the dreaded “Foosa” amid fabulously intoxicating backdrops. The lush splendour of the jungle is beautifully achieved with a determination to concoct retina-soothing hues and a keen eye for detail. The dead crew of the crashed plane hanging in the trees makes for a neat image, as does the interior of the wrecked aircraft itself - a finely detailed environment even when it is filled with lemurs. And the magical oasis that awakens Alex's dormant predatory instincts is as hypnotically tranquil an idyll as you could wish for. The terrific contrast between the majestic tropics and the harsh monochrome one-shot view of Antarctica (“Oh, this sucks!”) is a nice visual hark back to the infinitely-superior Ice Age.

“If we had a lot of live people here, it wouldn't be called the wild, would it?”

But what lets the film down is its main clutch of characters, who just don't seem to possess enough charm to pull it off. They are a little too familiar, and lack the depth of many of their animated counterparts from Dreamworks or especially Pixar, their personality's decidedly shallow affairs that refuse to allow much scope or breadth. Ben Stiller's Alex is undeniably the star of the show - his fantasies about raw steak are fantastic and his on-going battle with his own vanity and love of home comforts against the new instincts beginning to rouse within him are the most successful components of the set-up. Marty is only sporadically amusing, however, and Chris Rock's vocalisation doesn't do the character justice at all. It may have seemed like a good idea to have a hip, jive-talking zebra in the mix but, to me, it just comes across as cliché. Likewise the sass of Jada Pinkett-Smith's virtually non-existent Gloria - oh let's have a hippo that's sexy and street-smart, that'll be different. It's not though, is it? Injecting cartoon animals with huge doses of modern-day cool is tired and corny and, along with Rock's lame interpretation just helps the plot stagnate with irritatingly wisecracking dialogue. Although, I did like Gloria's arrival on the beach of Madagascar with some cunningly placed starfish about her person - “Alrighty boys ... fun's over.” But, by far the worst and most superfluous member of the menagerie has got to be Melman. Employing the mumbling, slightly nervous and embarrassed voice talents of the vastly overrated David Schwimmer, the anxious giraffe just falls flat at every turn. His humour misses the mark and the animated depiction of a gangly hypochondriac is full of annoying bulging eyes and lacklustre sight-gags that pitch the movie back into the juvenile ballpark. For a film that features a commando squad of para-military penguins who not only plot and scheme deviously behind their façade of a show for the public at the zoo, but go on to hijack a freighter by violently taking out its crew with neck-chops, this return to toddler-type humour makes the tone distinctly uneven. Shrek and its sequel both get the balance perfectly right because they steadfastly refuse to tone down for the kids, keeping up the subversive qualities that ensure constant grownup interest throughout, whilst still entertaining the small ones with visual dexterity. Madagascar tries to hard to employ the quips, references and gags that appeal to all ages but I don't think it comes anywhere near to achieving the same level of consistency, the writing and the characterisation continually hampering it.

“Come on everybody. Let's go meet the pansies!”

And nowhere is this toning-down more evident than in the monstrously restrained use of Sacha Baron Cohen as the limp-wristed King Julien. With this hairball dictator there was a real opportunity for some fast and ribald fun courtesy of the Ali G impresario. Now, okay, this is a kid's film and therefore hardly surprising that he largely plays it safe, but surely the appeal of casting him in the first place was in the promise of some crafty innuendo and risqué word trickery for the grownups to smirk quietly at? Sadly, it seems rather pointless having him involved at all if his talents are going to be suppressed. I mean, when all said and done, anybody could have supplied that voice. The lemurs, though, do look great. When amassed and living it large with the admittedly excellent “I Like To Move It, Move It” routine, the film really comes alive with the entire screen filled with the manic critters in a raucous and sensationally vibrant centre-piece. The animation may feature far too many in-air acrobatics - literally everyone spins, pivots and somersaults - but it is a dazzling throwback to the junky, non-stop abandon of Tex Avery or Chuck Jones, ensuring that the film is always, at least, easy on the eye. More cartoon-like than The Incredibles or Monsters' Inc, for example, but I wouldn't hold that against it.

Thankfully, the moralistic stance is not that cloying. In fact the theme of bred-in-captivity animals seeking the wild (or, more pertinently perhaps, the wild within them seeking to be found) is quite a clever one. Of course, we get the typical Disney-esque staples of friends sticking together and discovering the true meaning of home and belonging, but it is played out with a more refreshing and contemporary air. Though, I feel that the makers achieved this more through accident than by design. So, ultimately Madagascar is a misfire. But, unlike Shark Tale, it is still an entertaining one. It pleases the kids - I know - but it is very unlikely to be one that they will recall fondly (or even at all) in the years to come. And, sadly for grownups, there is precious little fun to be gleaned except from the mesmerising visuals.