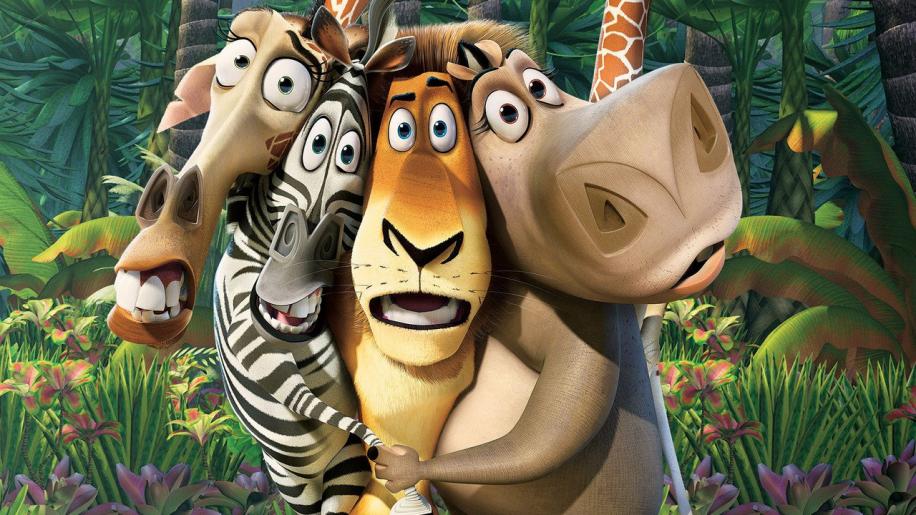 As with most recent CG animated movies, the DVD for Madagascar is a visual delight that literally sets even the humblest of TV screens on fire with captivating colour and a pixel-perfect transfer. Coming in with a terrific anamorphically enhanced 1.85:1 aspect, the image is rock steady, steeped with impeccable definition and heroically resistant to any form of digital demon intervention. This is the kind of beautiful disc translation that has home cinema sales-staff flooding their showroom screens with. Everything is bright and sharp and a constant pleasure to look at. From the wonderful colours of the animals and the locations to the detail captured in the jungle foliage, the rolling waves, the sand and the sea-spray - all is crisp and finely rendered.

Despite all the vast tracts of lusciously deep colour, there is never any hint of bleed or over-saturation, the fidelity of the spectrum is perfectly maintained with an eye for vibrancy and warmth. Edges are nicely locked in and there was never an indication of dot crawl or motion-drag throughout the fast action. The lush island foliage is marvellously realised but, to my eye, not quite as jaw-dropping as that delivered in Pixar's The Incredibles - which is pure reference quality in my opinion. You can always tell a Dreamworks CG production apart from Pixar, though. There is a difference in style and the degree to which realism is attained. Dreamworks seem to opt for a broader visual aesthetic that can make their images sometimes less vivid and more, well, cartoonish, but Madagascar is, without a doubt, a truly splendid piece of work that will hold up to scrutiny for a long time to come. Well done. Madagascar's DD5.1 track is actually pretty good fun. Featuring some great directional sound and cool effects zipping around the entire set-up, this nevertheless places the emphasis on fun over realism. But you're still guaranteed a quite exciting immersion into the colourful animated world. The steerage is well-structured with each channel being utilised clearly and cleverly. Alex pottering about with his beach construction and a perpetually lively jungle ambience are indicative of a well-co-ordinated environment that makes smart use of all the speakers. The bass level is fine and I had no problem with the high ends, either. Occasionally, the soundscape is quite cluttered with cacophony, but the transfer handled it all with ease, allowing lots of little nuances to be heard throughout even the bigger moments.

The dialogue is direct and clear and never hindered by a surround package that knows when to blast it out and when to keep it in check. The score by Hans Zimmer is suitably bombastic and catchy, and the disc presents it with a solid style that keeps it bouncing along. Although the DD track never puts a foot wrong in terms of delivery, or activity, it is still a little quieter than a lot of other rip-roaring sound designs out there. But this is still a wonderful track that is a constant delight, keeping you fully immersed in the madcap antics on-screen. A good, solid effort. Well, to put it quite simply, Madagascar gets a solid 7 out of 10 purely because it contains the terrific The Penguins in “A Christmas Caper” short that ran in cinemas before Wallace and Gromit: The Curse Of The Were-Rabbit. Despite the plethora of goodies on offer, this is about the only thing that you will ever refer back to, the rest being stock filler of the bogusly happy, most sanctimonious kind. I don't know about anyone else but the inclusion of games on a DVD always seems to be a pointless exercise. They aren't any good and kids, certainly mine and his little gaggle of mates, express absolutely no interest in them whatsoever. I looked them over for the purpose of this review but I know that I will never, ever return to them. Anyway, the full roster of extras runs as follows:

We get a feature Commentary from directors Tom McGrath and Eric Darnell which proves what amiable people they are, how happy they were to make the film and work with likes of Ben Stiller and Chris Rock. Thankfully, they are not too dry or technical, sticking to the story on-screen quite closely and discussing its themes with a lighter approach than many animated filmmakers. Tom McGrath reveals that he supplied the voice for the penguin skipper and the pair point out various little gags dotted around the film, like putting smiles on the skulls so the sight wouldn't be quite as gruesome for the little ones. Interestingly they talk about the casting of Sacha Baron Cohen (whom, prior to making the film, neither of which had previously heard of) and how he would manically act out his role and go off on massive impromptu tangents that we are informed were hysterical. This just makes it sadder that most of his adlibs never made the final cut. Whilst fairly entertaining, this is still a relatively quiet and slow-moving chat-track.

The Penguins in “A Christmas Caper” (12.01 mins) is a brilliant little adventure for the two-tone amphibious commando squad, with an appropriate Yuletide flavour. When one their number goes on a solo mission to bring festive cheer to the lonely Polar Bear in the zoo, getting himself abducted in the process by that vicious animal-bashing granny from the main film, the platoon mount an incredible rescue attempt that features the impact-heavy slapstick style of Tom & Jerry. Very good indeed, folks, and undisputedly the main attraction in this package.

Mad Mishaps (1.30 mins) is one of those incredibly un-interesting clusters of animation outtakes that is woefully un-amusing, and pointless, in the extreme. Absolute rubbish.

Meet The Cast (7.46 mins) is purely infuriating EPK gubbins from the film's promotion that just serves to grate on the nerves. Featuring way too many clips from the film, heaps of blatantly obvious facts and far too much backslapping joviality to be viewed without gagging, this is, once more, complete rubbish. And no Sacha Baron Cohen either.

Behind the Crates (23.15 mins) is the type of making of featurette that adds spectacularly NOTHING to what you already know. Full of repeated statements and clips, this is pure dross - light, jazzy and fluffed-up to the gills. Despite the occasional attempt to inject some humour from Stiller, Rock and Schwimmer this feature maintains the level of mediocrity that this release appears to be striving for in terms of behind-the-scenes information.

The Tech Of Madagascar (4.59 mins) makes brief mention of the “squash and stretch” style of animation that was pioneered by Tex Avery and Chuck Jones as Nick Foster, Head of FX and director Eric Darnell talk us through the animation techniques and influences on the film. Not bad actually, but at five minutes it just isn't enough.

Then we get Penguin Chat, in which the penguin-patrol from the movie give a commentary over their scenes. Lasting 8.42 mins, the scenes play out sequentionally and are titled, but the chat is sadly nowhere near as amusing as you would have hoped for. In fact, folks, this is a terrible letdown. I kept waiting for something funny to happen - but it never did. And, even worse, this just serves to reveal how naff a couple of the voices are, as well. And why is it that every single joke army squad has someone called Kowalski in it? More rubbish.

Enchanted Island (7.50 mins) is a look at the real island of Madagascar, actually the fourth largest island in the world. We get to meet Dr. Russell A. Mittermeier, President of the Conservation Trust as he begins to give us an informative insight into the island's wonderful and mysterious ecology ... but then, oh no, Dreamworks' honcho Jeffrey Katzenberg hijacks the show to deliver a scarcely believable resume of how he has always been enamoured with the locale before ushering in the same old bunch of repeats from the other docs, utterly ruining what could have been a nice and respectful little featurette. Listen out for the blatantly bogus sentiment that skull-faced Katzenberg serves up about hoping this lush, unspoiled paradise will soon benefit from the tourism that his film will have created. Is this guy for real! Utter dross ... again.

Next up is some text screen bios for the Cast and the Filmmakers, followed up with some pages of Production Notes. Yawn.

Then we have the majestic full video for King Julien and Co.'s “I Like To Move It, Move It” video - which is good fun.

What would this release be without something for the kids, though? And, thus, we get the Games and Activities for the little people which are sadly - yep, you guessed it - a load of rubbish. Lame and unimaginative and possessing all the repeatability of a trip to the dentist.

There's some previews for Shrek 2, Shark Tale and Kicking and Screaming, and even one for the upcoming Over The Hedge, which is actually more of a little behind-the-scenes EPK as it runs for 5.14 mins and is full of saccharine-flavoured whimsy and bad attempts at humour from its star, Bruce Willis, and its director.

Oh, and let's not forget the Penguins Crack The Code gimmick, which is not really an Easter egg as it is listed plainly in the menu. Here, you have to find the code via the discovery of the penguin footprints dotted around the various menus. For obvious reasons I will not divulge their exact whereabouts, or what you would be privileged in gaining once you have cracked the code. And yes, the obvious reason is that I couldn't be bothered completing it in the first place as, on track record with this release, the results are bound to be ... rubbish.

So, as I said at the start of the extras, Madagascar gets a 7 out of 10 for its inclusion of the Penguin short. Without it, it would barely scrape a 5. Total cheese-ball, I'm afraid. Madagascar contains all the right ingredients for an animated family-favourite - cute animals, snappy dialogue, heaps of movie-references, entrancing visuals and even a catchy, kid-pleasing score - but somehow, somewhere along the way it manages to miss the mark. Never quite as funny, nor as clever as it thinks it is being, the film is still a joy to watch. The characters and the vocal talents employed to bring them to life are a little too familiar and somewhat stereotypical to stand out from the crowd, with one or two of them just plain annoying. The penguins steal the show, folks.

Its DVD incarnation is pure quality in terms of AV performance, however. The look and sound of the movie is utterly tremendous with a practically flawless transfer that, like all the best animation, simply begs to be viewed on the biggest possible screen. The extras leave a fair bit to be desired, being rather run-of-the-mill filler, but it must be remembered that this release is, primarily, aimed at children. And, if the pleasure, and repeatability that the film has brought to my little lad, is anything to go by, then Madagascar is still a fairly essential purchase for families.

Reasonably enjoyable, then ... but more Shark Tale than Shrek.