The ending is as triumphant and funny as you could want. 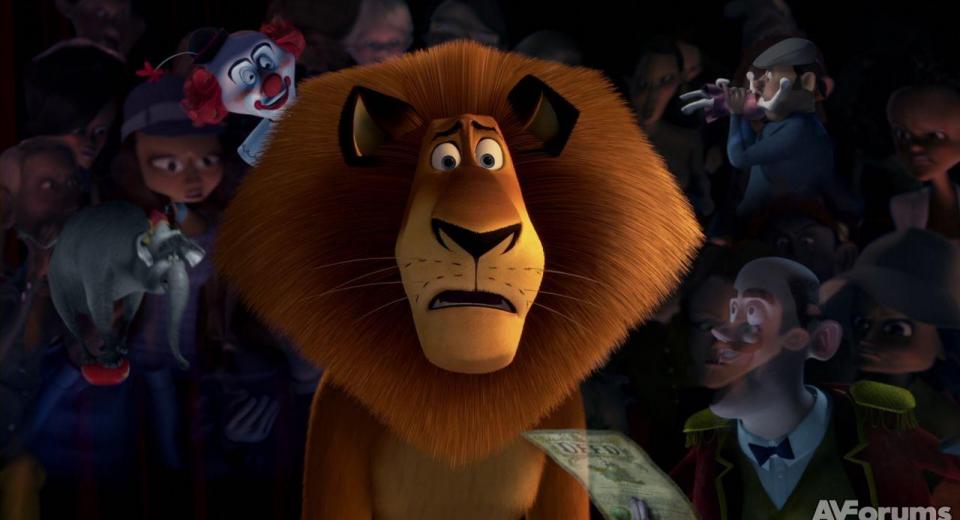 These comments refer to the UK 3D release. This is without doubt the best 3D animation I have seen to date. It truly is a generation ahead of the competition in terms of compositing, animation and 3D visualisation, looking almost photo-realistic in terms of lighting, while even the smallest nuance of the frame shows incredible attention to detail. The amount of 3D pop out should satisfy even the most rabid of 3D viewers, even if it does lead to some eye strain after a while, but the depth is possibly a little less severe than some may hanker after. The result is an almost total lack of layering and the illusion of solidity and roundness. By this I mean the picutre does not seem to have been cut up into discrete layers, but appears as a continuous diminishing effect, almost as if you could peer around the foreground objects and see more of the background.

Looking at the picture in general, this is excellent test and demo footage. While older generation animations suited demo use very well, as the lack of detail and bright, full colour fills reduced banding and shading issues, this movie has all the bright, eye catching detail and the all important low level shadow information as well. From the faint hint of stars in a city nightscape to the literally hundreds of individually rendered expectant crowd faces at the circus, it is all there and all looks stunning.

The extra brightness for 3D can lead to saturation and solarisation, particularly in bright and colourful scenes, but there is none evident here. Of course, exposure, colour balance and contrast are spot on throughout and motion looks incredibly smooth and fluid, even in the fastest sections.

I have no hesitation in giving this movie a 10, both in 2D and 3D, it really does look that good. While DTS-HD MA might rule the roost, a few titles are produced with the rival Dolby TrueHD system, including this release. The two systems use quite different methods to produce the same result, namely that of lossless multichannel audio. Part of the reason why DTS-HD MA has become dominant is that it is backwards compatible with the small number of legacy players that support DTS only. This means a separate stream does not have to be included on the disc for older players. Dolby True HD by comparison requires a second stream to meet Blu-ray specifications and this of course takes up more disc space and more of the precious bandwidth. Whatever the technicalities, this disc does sound simply superb, with the 7.1 stream every bit as fulsome as one could wish for. Bearing in mind the younger audience, crescendos are slightly muted, so the dynamic range feels slightly crushed, but this is very minor on the whole.

The surround mix is subtle and quite complex, with much made in the way of ambient effects, as well as the more dramatic spot placements. Whether it is the 7.1 or the Dolby codec itself, but the effects fill the soundscape with much more depth and width than I tend to find with 5.1 DTS-HD MA streams. In any case, it is a delight to sit immersed in it all. The dialogue is generally quite clear, but occasionally it gets sucked into the rest of the mix. Part of this seems to be due to quite a polite top end, with some of the brilliance in the tone missing somewhat. There was only the occasional word that got hard to catch, but on a release of this stature, it is enough to raise comment. Your sub gets a bit of a workout, but again, bearing in mind the younger audience this movie is designed for, do not expect blurred vision and the ornaments jumping around throughout the film.

The choice of music includes virtually current songs like Katy Perry’s “Firework” nestling next to “Anyway you want it” and “Wannabe” from a while back. There is also the more traditional classical score holding things together as well. At times it starts to sound a bit congested – almost as if quite gentle limiting has been applied, causing the sound to thicken up. The closest thing I can think it sounds like is a slightly over recorded analogue cassette tape where the peaks get gently compressed by the magnetic flux overload on the head. (For those born after about 1986, tapes were those strange things your dad put in the car stereo so he could listen to his Queen albums on long journeys.)

For impressing the neighbours and running demos, this is a good soundtrack. The slightly low dialogue track will show up any weaknesses in the centre speaker, while the polite treble will highlight any excessive mid-high frequencies as these will tend to be heard more prominently. Not the track to audition a new sub on – stick to Tron Legacy or other bass heavy track for this, but as an all-rounder, it is certainly approaching reference quality. The disc reviewed is the 3D, 3 disc SKU with ultraviolet download.

A quick word about the 3D disc here, it took me three attempts to get it to play. At first it refused to recognise I have a 3D compliant system, then it played, but incorrectly, with much noise and menu artefacts across the bottom of the screen and on the third attempt it ground into life after a few minutes. The 2D disc however, was fine.

The 3D disc contains only the film and associated subtitles, so if you want to view the extras, you need to change over to the 2D disc. Things do get better once you do. Language support on this European disc is very wide with German, French, Dutch, Italian and Flemish all available as both subtitles and sound tracks. Quite unusually, they are all surround mixes, although of course these are not Dolby TrueHD.

Splitting the extras into two parts – as indeed the menu on the disc does, we shall turn to the Blu-ray exclusives first.
The rest of the extras are shared between the Blu-ray and DVD discs, but all are available in HD on the Blu-ray. In addition to the filmmakers’ commentary, we get the following:
Not a bad bunch, and interesting for the Animators Corner, but I do question the sort of extras that kids movies really need. There is a distinct lack of a bonus “B” movie here, something that is present on many competing releases. For family viewing you won’t go far wrong with this movie. Colourful, fun, engaging, it is all the things a good animation needs to be. It also avoids being preachy, overly rude or scary, all important if you have very little or impressionable kids who repeat every piece of slightly risqué dialogue. There is some depth to the characters and not just in the 3D visual environment either. The cast do a great job of voicing the on-screen talent and the animators do an equally good job of presenting an attractive movie to become immersed in.

Technically this film looks fantastic, with plenty of pop out and realistic depth. There are films that go further into the screen and for me, the pop out is too much, but many prefer it this way. The audio is also very good, but just loses a point due to a few bits of hard to hear dialogue, polite treble and a hint of limiting or compression that makes things sound a little wooly and just a bit too busy. The extras are above average but the lack of a short second feature is disappointing at this price. These are minor niggles though on what is a good release and no doubt will continue to keep Dreamworks on the gravy train for a little while longer.