Who is Don Draper? 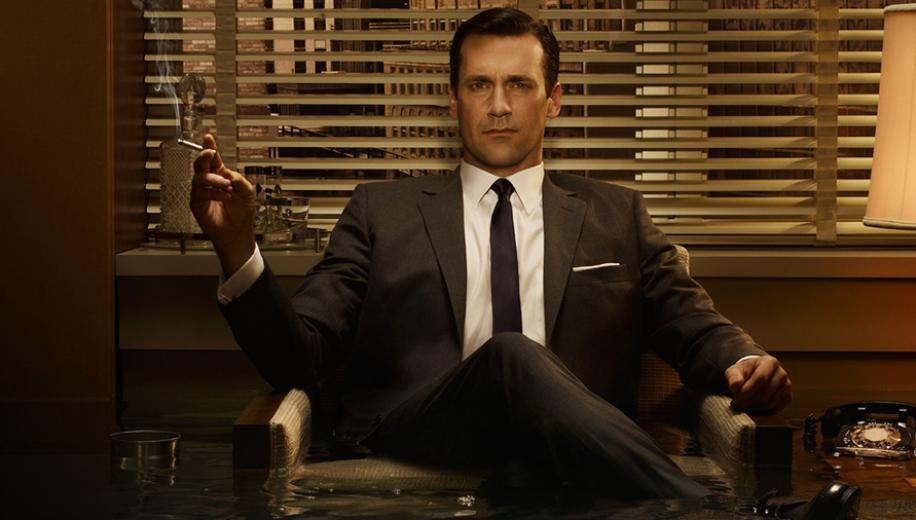 If you've been a fan of decent quality, well-made TV dramas, and have followed the likes of Deadwood and The Wire through to completion, you may have noticed slim pickings in the schedules over the last couple of years. The West Wing and The Sopranos have both ended their long runs and even 24 is drawing to a close. Personally, I think that Reality TV should take a lot of the blame for the cancellation of any shows before their time. If you're a fan of any of the aforementioned shows, you would have tried your best not to miss an episode, but as a casual viewer, if you'd never seen an episode, you would never really pick up one of these TV series' halfway through the run of one of its many seasons. Reality TV may not have been decent quality viewing, in any stretched meaning of the term, but it was easy to just pick up and watch when you had a spare hour. You didn't need to know the character backgrounds established over the seasons, or the various main and sub-story arcs plotted out. You could just watch an hour of pre-recorded bird-chirping in a manufactured human pig-pen where various z-list 'celebrities' mingle and show just how stupid they are. Case-of-the-week procedurals are the only other form of TV series that really has much of a chance of standing up against the cheap throwaway offerings of Reality TV, with the likes of CSI (in 3 flavours) and the excellent House trying to stay formulaically fresh week in and week out. But if you don't like procedurals, and actually want something a little richer and more satisfying, you may just have run out of things to watch.


Mad Men is about a 60s Ad company, Sterling Cooper, and its various employees, and - in turn - their respective families and woes. It largely follows the life of the creative director of the company, the mysterious, innovative and enigmatic Don Draper, a man whose marketing skill and taste is unparalleled, but who is often undermined by his dark and hidden past. Slowly circling his three children as his relationship with his wife hangs on the threads left after his unrelenting infidelity, he also has to deal with eccentric, demanding clients, office politics, and temperamental co-workers, who are each and all vying for either attention or promotion. Will Draper be able to juggle his demanding job - making the shareholders happy with their profits and giving even the most eccentric clients what they want, whilst also pleasing his wife, rearing his children and keeping his dark secrets buried?


Back in 2000, Matthew Weiner came up with the concept for Mad Men, pitching it unsuccessfully to HBO. Instead he started writing for their new TV series, The Sopranos, and it was only towards the end of its run that he managed to find a gap in the market that was suitable for his original idea. Picked up by ABC, Mad Men immediately proved to be a well-produced, richly period character-based drama, most memorable for its authentic visual style that followed suit after the likes of Rome and Deadwood. It is also the most popular show in the history of ABC.


Set in the 60s, the series is full of all of the staples of that era: heavy uninhibited smoking, prolific sexism, commonplace male infidelity, homophobia and racism. It cleverly counterpoints the 60s situation with modern events, with key historical playing out in the background and influencing the way in which society behaves - from the Cuban Missile Crisis to the assassination of JFK. Keenly introspective in its character-development and dialogue, it poignantly showcases an era where the majority of people had decent manners often regarded as 'old-fashioned' by today's standards, yet still behaved in a way which would simply not be affected or expected these days. Men charm and woo, unquestionably provide well for their wives, but also remain unforgivably sexist and perpetually unfaithful. Women are often insatiably dissatisfied and repressed, yet thrive off the pampered, lavish existence of 'being married to a rich guy'.


It is interesting to see how far we have come in terms of society, in both directions: good and bad. It may have been worth any cost to attain equal rights for women, and ostracise racists and homophobes, but that does not mean that we can pretend that there was no cost. Decency and decorum have gone right out of the window, along with manners and, perhaps most importantly, respect. Nowadays (some) women still expect to be taken care of and provided for, yet also retain the right to work for their own independence, and bring up their children by putting a nanny on the payroll. Double-standards are rife: independence for men implies philandering, where independence for women is wielded as a somewhat ambiguous flagship; sexism against men is totally acceptable, against men it largely involves a lawsuit. And it's not as if racism and homophobia have disappeared, they are now merely not as overt as before.


Mad Men allows its viewers to graze and masticate on an era not that long ago, such a stark contrast in so many respects, and yet strangely familiar in terms of society's behaviour as a unit and in the individual. At once highlighting all of the flaws in those days, which we have now eliminated, it poignantly promotes all that has been lost over the years as well.


It should be noted that this is a review of the third season, so if you've not seen the first two, then you should really go back and watch them - Mad Men may just fill the void in your quality TV viewing schedule. Whilst nothing here is a massive spoiler, it's better to let events unfold chronologically, there being little point in watching this from two seasons' in.


The series itself has evolved over the three seasons, the main ad company undergoing several changes, most notably being bought out at the end of its sophomore run, with the Cuban Missile Crisis heightening public paranoia in the background. Viewers will have noticed snippets of Don's past emerging, the cracks in his cleverly-created second identity starting to show over the course of the season. His marriage to Betty has been strained by his numerous infidelities, but was brought together temporarily by the birth of their third child. But now we find her getting a taste of the dream life, both in the form of a suave admirer, and also in the form of a romantic extravagant getaway with Don himself. That these events only go to highlight how miserable (however unappreciative she is) her existence is brings their relationship to boiling point, with Don's own dark revelations marking the straw that might break the back of their marriage.


Peggy, who has risen from secretary to copywriter, is still trying to break free of her association with Pete, the account executive whom she once had an affair with, and is being headhunted to leave the company. Pete himself has his own issues, the head of accounts being one of the individuals the company let go, he is now forced to go up against the Brit, Ken, to see which of them will get the position. Sal, the art director, has to face up to the implications of his closet homosexuality, and Joan, the hot office manager and head of the secretarial pool leaves the company to follow her aspiring young doctor husband, only to be forced to fall back on the help of senior partner Roger Sterling, with whom she once had an affair, when her husband's promising career does not take off.


The company itself is struggling under the responsibilities introduced by the new British owners, who demand cutbacks and reductions in the workforce, along with better results, a matter which - in itself - twists and turns towards an unexpected conclusion where the backers show their true intentions for the company. With the defusing of the Cuban Missile Crisis, the powerful preaching of Martin Luther King and the assassination of JFK all going on in the background, it all makes for a surprisingly potent cocktail.


It may be an ensemble piece, but Jon Hamm still carries the whole drama as Don Draper, perfectly composed (even when he's dishevelled), every word well-chosen and seldom losing his calm. You can see why he won so many awards for the role, bringing out the genuine tragedy in this flawed integral antihero character. January Jones remains consistently good as his conflicted wife, although her character is somewhat less sympathetic in this, the third season. John Slattery shows us a different side to Roger Sterling, the silver-haired senior partner whose heart problems have changed him to be both faithful to his pretty new wife (despite temptations) and largely responsible now in both his drinking and smoking. Vincent Kartheiser (who you might remember as Connor from the Buffy spin-off, Angel) continues in his line of playing irritating, stuck-up, whiny characters, although his role here appears to have been created specifically for that purpose, so at least he's behaving appropriately. And Christina Hendricks highlights the biggest missing component from modern society, the beautiful, buxom but strong-minded female lead. Amidst the post-millennial skinny jeans-wearing size zero she represents what real women used to be all about.


Mad Men has been called The Office played straight or a thinking man's Dallas, but I think it is so much more. It still has its flaws, and will definitely not satisfy viewers who require even a modicum of firearms action or criminal activity. It needs patience, dedication and attention, but it pays in spades and the end result is a lavishly-produced period drama, a compelling character-study, both entertaining and though-provokingly topical in its poignant juxtaposition with modern day society. Intelligent, well-crafted viewing.