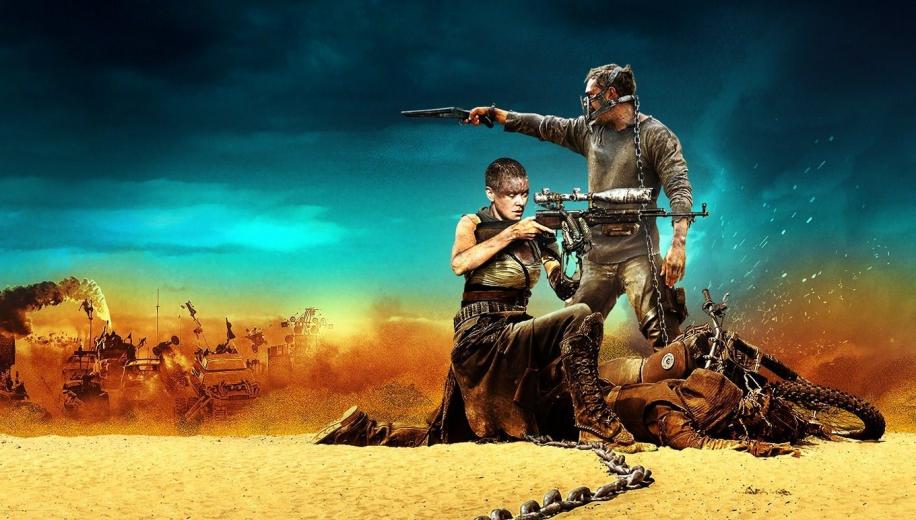 Moving with inexorable velocity, Mad Max: Fury Road throttles along an ostensibly simple path, yet is grounded in a vast sandbox of delicious dystopic delights.

Despite decades of increasing concerns over whether or not he’d pull it off and whether or not it should have even been attempted – particularly without Gibson’s old Max in the driving seat – George Miller somehow managed to restart the engine on his fabled road warrior saga with a newfound vigour. Indeed, whilst it largely co-exists with its preceding trilogy, it’s largely an alternate timeline reworking, reimagining his original post-apocalyptic landscape with wild abandon. Bigger, bolder, but just as bloody and brutal, Fury Road explores the vastness of the Mad Max universe as no entry has before. In making it Miller seemingly channelled equal parts comic book glee and Apocalypse Now-esque obsession, taking the simplicity of a straight chase movie, retrofitting enough nitrous insanity to blow your mind, and plopping his weathered protagonist right into the middle of this mad, magical maelstrom.
Hardy’s remodelled Max isn’t even in the driving seat either (for some, good news, as he’s not Gibson’s Max), instead playing co-driver to another desert-ravaged soul, Furiosa, with Charlize Theron’s bold heroine proving every bit the driven lead the franchise deserved. With some of the greatest practical car stunts you’ll ever see, and some striking visual effects too, Fury Road provides a seemingly endless staging ground to one of the greatest road chases of all time, in some ways re-envisioning the climax of The Road Warrior with a new budget and new blood, but also drawing a surprisingly well-developed and intricately-layered story and setting into the mix, evolving as the chase unfolds. It’s not technically perfect, but it is unquestionably magnificent, and you will have never seen anything like this before, which – for many – can only leave it a candidate for the best experience of the year.

Mad Max: Fury Road hits Region Free UK Blu-ray courtesy of Warner, who deliver a spectacular video presentation in both 2D and 3D. Housed on separate discs, the movie is rendered in its original theatrical aspect ratio of 2.40:1 widescreen with respective 1080p/AVC 2D and 1080p/MVC 3D High Definition encodes, both of which look glorious in their own right.

Lapping up the magnificent visuals with precision, the feature’s distinctive blend of comic book stylisation and practical stunts provides a rich landscape brimming with acutely observed detail, all of which is delivered here simply perfectly. From the gritted teeth behind Max’s iron mask to the fleet of unique super-modded vehicles; from the face-paint of Furiosa to the chest plate of Joe, skin textures are rich with palpably texture – you could practically reach out and touch them – and costumes are authentically worn and battered, with the battleground of unforgiving endless dunes providing its own wind-blown beauty. Colours are bold and vibrant, with the seemingly barren landscape rich with strong tones and peppered with a shotgun blast of primaries, whilst intentionally colour-graded night sequences engulf you in cold blues, black levels remaining rich and deep but also always clinically resolved irrespective of how dark things get.


Whether you revisit it in magnificent, razor-sharp 2D or lap up the eye-popping visuals in 3D, this is one of the best presentations of the year.

On the 3D side of things characters come even further to life, as bodies are given real-world roundedness, vehicles and objects given almost tactile dimension, and background settings superbly blended in. This is far from a pop-up comic book environment, offering almost real-life depth that’s nearly completely devoid of unnecessary gimmicks and in-your-face shots (there are a couple of obvious, debatably unnecessary, exceptions). The sand dunes roll back way beyond what your living room can afford, as if staring into the distant desert landscape, whilst even the night sequences manage to stay surprisingly well resolved despite the fact that this is normally one of the toughest areas for 3D to cope with.

The Blu-ray of Mad Max: Fury Road includes a Dolby Atmos soundtrack that can be listened to in 5.1, 7.1 or various Atmos configurations.

Cas Harlow reviewed the audio using a standard 5.1-channel setup - Fury Road’s Dolby Atmos track affords those not yet enabled a stunning demo-quality Dolby TrueHD core that will leave you equal parts exhilarated and exhausted, and that maintains the reference standard established on the visual front. Rendering the admittedly limited dialogue clearly and coherently throughout – yes, even Hardy’s mumbling Max vocals – largely across the fronts and centre channels, it distinguishes itself more through striking effects coverage and an at-times churning, at-times haunting, at-times rousing score which marries the non-stop chase movie’s action dynamic perfectly.

With thunderous gunshots echoing through the endless desert-scape, myriad – each distinctive, but all growling – engines roaring across the stage almost throughout the entire proceedings, the track effortlessly posits you in the midst of this mechanical maelstrom, as sandstorms tear across your living room, explosions blow up your kitchen, and torn metal gets hurls past your head and into the walls around and behind you. The LFE channel never lets up, grounding the effects and score with a rumbling depth that further threatens an all-new apocalypse.


Easily one of the best tracks of the year, even if you don't have Atmos.

Steve Withers reviewed the audio using a 7.2.4-channel Dolby Atmos setup - In the same way that the film's visuals are a relentless feast for your eyeballs, so Fury Road's Dolby Atmos soundtrack is an equally merciless sonic assault on your aural senses. This is easily one of the best and most immersive Atmos soundtracks released to date and really demonstrates what can be achieved with today's immersive sound designs. In much the same way as the 3D largely avoids gimmicks to create a realistic dimensional experience visually, so the sound designers have done something similar to create a wonderfully layered sonic experience. Although there are instances where the sound design does draw attention to itself, for the most part it concentrates on utterly immersing you in the world of Max, Furiosa and Immorten Joe.

As you watch the film you're aware of being surrounded by a hemisphere of sound, from the gentle wind of the deserts during the film's rare moments of respite, to the roaring dust storm that totally envelops you. The sounds of the vehicles completely fill the room, with the low frequency roar of the engines sounding frighteningly realistic. The explosions, gunfire and other sonic mayhem are all rendered with wonderful precision, whilst dialogue always remains clear and distinct. The percussive score drives the film along at a breathless pace and is perfectly reproduced with superb clarity, making Fury Road one of the best overall soundtracks we've ever heard. So put away your copies of Gravity because there's a new Atmos demo disc in town!

Miller’s much-fabled black-and-white version of Fury Road, which by all accounts looks majestic, is notably absent from what looks like a placeholder release.

Although also notably lacking a commentary, Fury Road’s selection of fairly hefty documentary-based extra features provides reasonably comprehensive background coverage which looks behind this evidently arduous road to a masterpiece. Maximum Fury: Filming Fury Road is the biggest of the bunch, at 30 minutes, and has just enough revealing information about the arduous shoot to inform those interested; Mad Max: Fury on Four Wheels spends half that time looking at the stunning – each unique – vehicles crafted for the production; The Road Warriors: Max and Furiosa looks at the two key characters; The Tools of the Wasteland further expands the production design details; The Five Wives: So Shiny, So Chrome has the five girls chatting about their experience on the production; and Fury Road: Crash & Smash offers a little unfinished and test footage. The disc is rounded off by about 4 minutes of unfinished Deleted Scenes, wisely excised. Whatever your feelings about the movie, it’s impossible to fault the demented audiovisual beauty on offer here, in one of the best releases of the year.

Stunning video - outstanding in both 2D and 3D - and staggeringly impressive audio, as well as a strong selection of extra features leaves Mad Max: Fury Road's Region Free UK Blu-ray package one of the most rewarding - and thus easiest - purchases of the year. Fans would have had it on pre-order for some time, whilst newcomers shouldn't give it a second thought; this is the best blind buy you'll make this year.