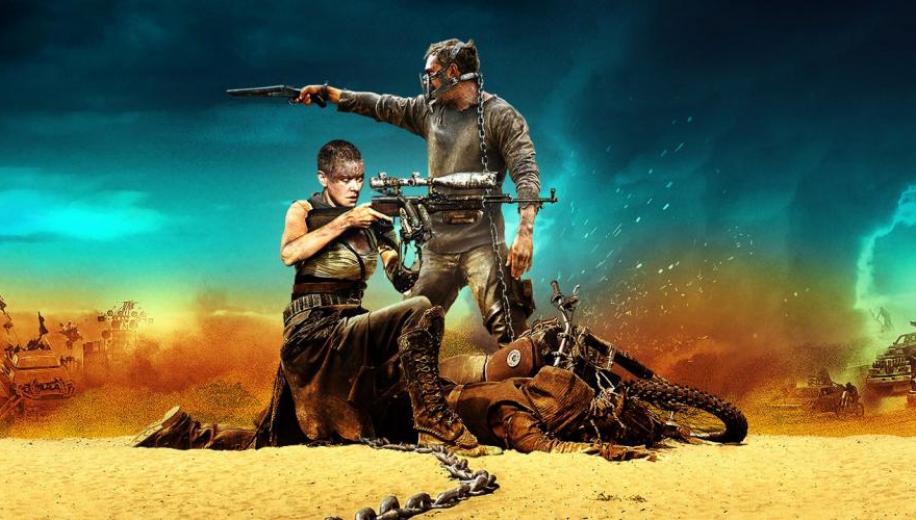 30 years in the making, George Miller’s, Mad Max: Fury Road took the world by storm. He created one of the most thrilling, visceral, heart stoppingly spectacular movies, that was so unexpected in a sea of CGI and made-by-committee, by-the-numbers films, that it stands alone. Fury Road is untouched by its nearest rivals, revealing how a single vision and a committed, dedicated team, can create a bold statement that is so far from where cinema has been floundering for years. It is a beacon of hope for the future of the format (wonderful juxtaposition in that the subject matter is so dystopian) where a simple story is told with attention to the visual medium, drawing the audience into a fast-paced, violent world and grips you till the very end.
It's an exhaustive ride, will we ever see it’s like again. The film is not without its critics but comments like ‘Why is Max not the centre of the film’, ‘It’s just a remake of Mad Max 2’, ‘There is no substance, it’s just one long chase’ are missing the point. Max is the vessel through which the story is told, a story that shares aspects with Mad Max 2 but expands upon the chase to a thrilling, edge of the seat, action sequence that has never been seen before and will likely never be seen again. There is a story here, there is a journey (over and above the physical one) and Miller, who created the world in the first place, has upped the ante to near unbearable levels – it is unparalleled in its ferocity and pace and should be held as a beacon for action films to follow. What is immediately apparent is the level of detail afforded by the Ultra HD Blu-ray, everything, and I mean everything, be it sand grains, grime on skin, torn, battered and filthy clothing, skin texture, rocky terrain, hill lines against majestic sky lines, are all absolutely pristine. Comparing directly with the Blu-ray it is these finer details that are the most obvious, thanks in part to the higher dynamic range, and while you may have to look closer to really tell the difference, the difference is there. On the down side, despite being shot digitally the filmmakers added quite a bit of artificial grain, which the HDR transfer does tend to emphasise, although it is also there on the regular Blu-ray.

Where the UHD really stands out from the HD is the depth of colour and this provides the really noticeable differences; blues are that much richer with greater range (especially in the ‘night shots’) while the reds and oranges of the desert terrain are far more vivid. The distant shot of the destruction of the truck between the mountains is the most dramatic. Indeed any explosions run extremely hot, with the colours almost burning off the screen. Highlights are far, far brighter, be it stars, metallic sheen, or the white-hot portions of explosions and really draw the eye. Dynamically the brightness and contrast are set to give deep incredible blacks with bright eye-scorching whites and this, as much as the wider colour gamut, gives the transfer a rich, powerful image.

However, in amongst all this praise we must mention the whole picture which, with is saturated colours, does come across as slightly artificial, as if everything has been pushed a wee bit too hard. Compared to the regular Blu-ray the Ultra HD image is strikingly bold and eye-wateringly vivid, but it also has an over-the-top appearance that some may feel pushes the image too far. The flames and explosions can appear almost cartoon-like, whilst effects can sometimes look less realistic. It's possible that this early HDR grade pushed the limits of the wider colour gamut afforded by DCI-P3 and Rec. 2020 but you could also argue that the colour scheme matches the over-the-top onscreen mayhem perfectly! Simon Crust reviewed the audio using a standard 5.1-channel setup – Just as the visuals are all absorbing, so too is the surround track which totally immerses you with effects, action and mayhem. Once again, right from the off, your ears are assaulted to a surround environment that does not let up; effects have perfect steerage around the room placing you front, centre, left and right of the action as engines, gun fire, explosions and mayhem erupt around. Seldom does a surround track immerse you so convincingly that you have to duck to miss the flying debris. Dialogue is clear and precise, sounding very natural and given plenty of directionality when needed. The score, too, utilises all the speakers, again, placing you in the centre of the action. Bass is deep and effortless with LF effects coming thick and fast; it is tight and controlled with resonating rumbles to rock the foundations.

Steve Withers reviewed the audio using a 7.2.4-channel Dolby Atmos setup – In the same way that the film's visuals are a relentless feast for your eyeballs, so Fury Road's Dolby Atmos soundtrack is an equally merciless sonic assault on your aural senses. This is easily one of the best Atmos soundtracks released to date and really demonstrates what can be achieved with today's immersive sound designs. The mix largely avoids gimmicks to create a wonderfully layered sonic experience and although there are instances where the sound design does draw attention to itself, for the most part it concentrates on utterly immersing you in the world of Max, Furiosa and Immorten Joe.

As you watch the film you're aware of being surrounded by a hemisphere of sound, from the gentle wind of the deserts during the film's rare moments of respite, to the roaring dust storm that totally envelops you. The sounds of the vehicles completely fill the room, with the low frequency roar of the engines sounding frighteningly realistic. The explosions, gunfire and other aural mayhem are all rendered with wonderful precision, whilst the minimal dialogue always remains clear and distinct. The percussive score drives the film along at a breathless pace and is perfectly reproduced with superb clarity, making Fury Road one of the best overall soundtracks we've ever heard. Maximum Fury: Filming Fury Road – 30 minute making of feature coving the development of the project.
Fury on Four Wheels – 20 minutes on the vehicles, from design to build.
The Road Warriors: Max and Furiosa – 10 minutes with Tom Hardy and Charlize Theron chatting about their characters, Miller’s vision and the final result.
The Tools of the Wasteland – 15 minutes looking at production design of the dystopian world and its many embellishments.
The Five Wives: So Shiny, So Chrome – 10 minutes with Rosie Huntington-Whiteley, Riley Keough, Zoë Kravitz, Abbey Lee and Courtney Eaton as they discuss their time on set
Deleted Scenes - 4 minutes and 3 scenes of wisely excised material.
Crash & Smash - 4 minutes of pre-production tests. Mad Max: Fury Road is an anomaly; a glorious irregularity that flies in the face of the cinematic industry with its over reliance on CGI, by-the-numbers storytelling and made-by-committee ‘visions’. George Miller who first brought Mad Max to the screen has taken some 30 years to return to what he clearly does best – action. Mad Max: Fury Road is a simple story, but it nevertheless has a story, and it is told with gusto – a ferocity and pace that no action film has ever matched; there is no shaky-cam, no one-second-quick-cut-editing; this is just wild (and real) stunts filmed in a way that you see the action and get caught up in the pace. Energetic, intense and the very definition of edge-of-your-seat viewing, Fury Road is one of a kind, bettering its predecessors by some considerable way, and bettering the industry that spawned it by leaving it for dust. Will we ever see its like again?


Mad Max: Fury Road is one of a kind

The Ultra HD Blu-ray will quickly become the default way to view the film, sourced from a 2K digital intermediate, the image makes full use of the available detail with vivid colouring and greater dynamic range thanks to HDR. It is pushed hard and some of the oranges pulse off the screen with over-the-top flamboyance that matches to over-the-top style of the film, although it is very different from the colours on the regular Blu-ray. The Dolby Atmos soundtrack is reference all the way with an aggressive, powerful and immersive track that drowns you in bass and effects. The extras are slight but efficient.