"The chain in those handcuffs is high-tensile steel. It'd take you ten minutes to hack through it with this. Now, if you're lucky, you can hack through your ankle in five minutes." 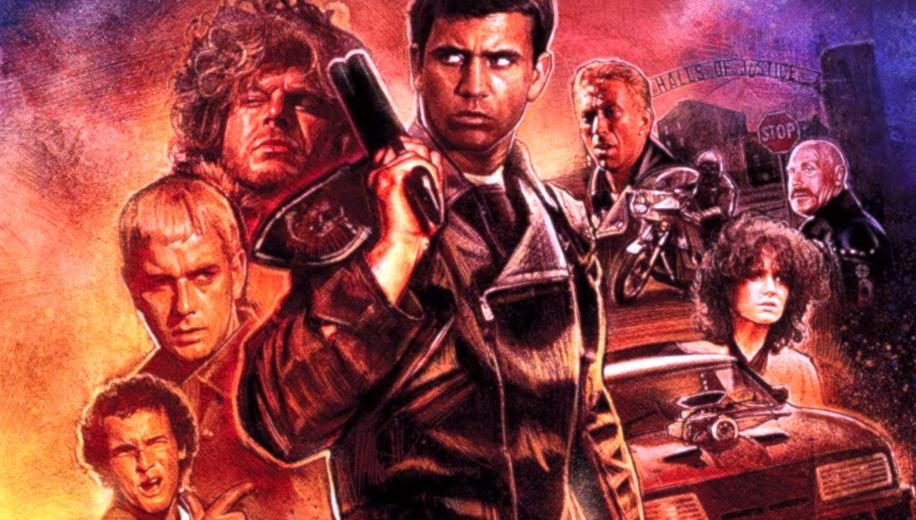 Mad Max: Fury Road may have reignited a franchise which was known for its post-apocalyptic vehicular mayhem, but the series actually started before the apocalypse, with a no-budget indie flick that director George Miller put together using a largely undiscovered cast, a real biker gang and unsurprisingly raw, practical stunts. And it's genius.

The story, set in 'near-future' Australia, has crime at an all-time high, and the police unable to main control over the dangerous streets, where anarchic gangs cause mayhem. The Main Force Patrol give chase, but are outnumbered and largely incapable of keeping up with the fuel-injected suicide machines that bomb around the highways. Max Rockatansky is one of the elite drivers, increasingly disillusioned by the violence he experiences on the job, and the impotence of the police force at stopping it, and eventually targeted by a vicious gang who want him to pay for the death of one of their own.

Miller's fable is simple in construction and characterisation, but almost flawless in execution

Inspired by the newspaper reports during the 70s oil crisis, which told of drivers prepared to go to great - violent - lengths to get fuel (a situation which would, somewhat amusingly, would be replicated during the pandemic with the 'toilet paper crisis'), Miller's fable is simple in construction and characterisation, but almost flawless in execution. It's a lean shark of a pre-apocalypse revenge flick. Sure, it's rough around the edges - the feature was shot for a few hundred thousand, and edited and scored in the director's kitchen - but that's only part of the charm, and it is hard to fault a single frame, with Miller displaying a striking talent with this debut, and bringing star-in-the-making Mel Gibson along for the brutal ride.

Gibson may have gone on to forge these familiar vengeful icons across the decades, but he was still fresh-faced and almost out of his depth in Mad Max, his character playing catch-up for the duration until the final act's transformation. It would be an iconic role, but - as with the franchise on the whole, it would largely be unlike anything we'd see from Max later down the line; this was Mad Max: Begins, in modern terms, and for the majority of the movie, he's just the last good cop, trying his best to keep himself and his family out of trouble. Absolutely scene-stealing is the late Hugh Keays-Byrne (who would return for Fury Road) as the eccentric gang leader, Toecutter, who gives a genuine sense of unpredictable, psychopathic threat to the seemingly unstoppable fleet of bikers who rule the streets.

Miller does a fantastic job bringing together that iconic orchestral score, some exquisite practical stunt-driven vehicular mayhem (the opening sequence is still tremendous), impressive filming (the on-the-road feel of speed is brilliant), colourful characters, nascent super-vehicles (the augmented 'V8 Interceptor') and a feeling of a world about to collapse into utter chaos. Although the apocalypse basically occurs as a montage prologue in the sequel, Miller set the stage here for a plausible, palpable implosion, and it remains one of the great directorial debuts of all time and a hell of a start to an enduring franchise.

Better than it's ever looked before

Mad Max was a low budget 1979 flick, and, working from that premise, there's absolutely no denying that this new native 4K presentation - with Dolby Vision to boot - is far better than anybody could have ever expected the film to look. The stunning improvements in detail, lush colours, texture and depth, with fine filmic grain only occasionally fluctuating, and simply no signs of unruly, excessive DNR, all leave this a masterful 4K presentation.

Detail is outstanding. From the curls on Max's wife's head, to the crazy hair of the Toe-Cutter; from the texturing on Max's leathers to the wild grass on the open plains, and the intricacies of the cars and elaborate vehicular mayhem. There's no edge enhancement here, with grain management expertly handled, leaving a fine layer of grain giving the image a very textured, filmic look but neither smothering the underlying detail nor - at the opposite extreme - being so clean as to even betray a hint of over-enthusiastic DNR. Even the grain is almost universally stable (a couple of interiors, like the hospital don't quite look as good, with the grain field getting heavier, but they're fleeting moments). The opening sequence alone looks spectacular.

Of course HDR and WCG come into play, along with Dolby Vision too, and this is the only area where the release might come under a modicum of scrutiny. On the one hand, the colours are vastly improved. Sure, the majority of the movie is pretty tonally bleak, but the bright yellow pursuit vehicles and road signs offer a bevvy of vibrant tones right from the get-go, and, sure, even the sun doesn't really want to afford any bright blue skies, but later into the piece, when we shift to - for example - the beach sequence where Jessie sunbathes, the tones are simply gorgeous; the sun is clearly out, and even the green foliage of the trees she runs through comes to life. There is some very impressive work here done on the colour scheme. But it doesn't necessarily completely escape controversy because Mad Max does, on the whole, appear to run a tiny bit darker than fans might remember it being, adopting a slight variance in the colour scheme which does feel like the film is cooler and less bright than before. 'Max was always a pretty gritty affair - particularly in its closing - but those bright blue Australian skies just seem that little more reserved this time around. It's hardly a deal-breaker, not affecting your enjoyment at all, and perhaps many who haven't seen the film in a while won't even notice, but it's probably worth mentioning. This is still the best the film has ever looked by a country mile, leaving it a superb way to revisit the classic.

Mad Max's 4K Blu-ray release eschews a Dolby Atmos High Definition 3D object-based immersive audio upgrade but does afford a slew of audio options which should please fans, including the original Australian mono track in DTS-HD MA 2.0, a DTS-HD MA 5.1 remix of the Australian track, and a mono DTS-HD MA 2.0 US English dub.

The Australian 5.1 track is infinitely superior, affording much better balance and none of the distortion evident on the mono

For many in the West, Mad Max was originally only really available - and broadcast - in a dub which Americanized the cast and dialogue (often changing the words). Obviously this was a shocking choice, which was often assumed to be to better suit Western tastes, but the reality - reportedly - was much more mundane than that. With Miller basically putting the sound together in his kitchen, and much of it recorded on location, some of the soundtrack didn't come across all that well (and the dialogue was often overpowered by the score), so he wanted to do some ADR / record new dialogue. Unfortunately many of the original cast were unavailable and so he elected to use a US cast instead to dub the entire track. Now, how much of this is true is another question, but the proof is arguably in the end result - even if the Australian mono track is the preferred, original version, it's really quite patchy, poorly mixed and frequently inadequate. The key scene at the hospital, where the fate of two characters is callously discussed by the doctors and overheard by Max is completely overwhelmed by the score, and the closing track as the credits roll has significant distortion. Now, fear not, nobody is suggesting you have to watch the film with that awful US dub, the answer comes in The Australian 5.1 track which is infinitely superior, affording much better balance and none of the distortion evident on the mono.

Dialogue is, for the most part, rendered clearly and coherently (and in the original Australian), whilst effects - as limited as they might be - still bounce around the track with some booming shotgun blasts and punishing crash noises. The car engines sound amazing, and, considering the paltry budget, it really is surprising that it can be made to sound this good. Of course, the score is a defining element in the production and really makes the movie, rounding out easily the best of a welcome selection of audio options.
﻿

Kino Lorber have put together a very nice looking set of extra features, but you'll have to own a Region A / Region Unlocked Blu-ray player if you want to access them as they're on all (but for the Commentary) on the accompanying Region A Blu-ray. Shame they couldn't port them over to the 4K disc itself.

They look to be all the old extras, listed as follows - Audio Commentary, George Miller Interview, Interviews with Mel Gibson, Joanne Samuel and the Cinematographer, Mel Gibson: Birth of a Superstar Documentary, Mad Max: The Film Phenomenon Featurette, Trailers from Hell Featurette, TV and Radio Spots and Theatrical Trailer.

Kino Lorber's US 4K Ultra HD Blu-ray release of Mad Max is an unmissable import - who knows when we'll see it in the UK and this release has everything fans could have hoped for, with excellent remastered native 4K video and Dolby Vision, as well as all the best audio options and all the old extras (in the accompanying Region A Blu-ray). Fans should pick it up now.