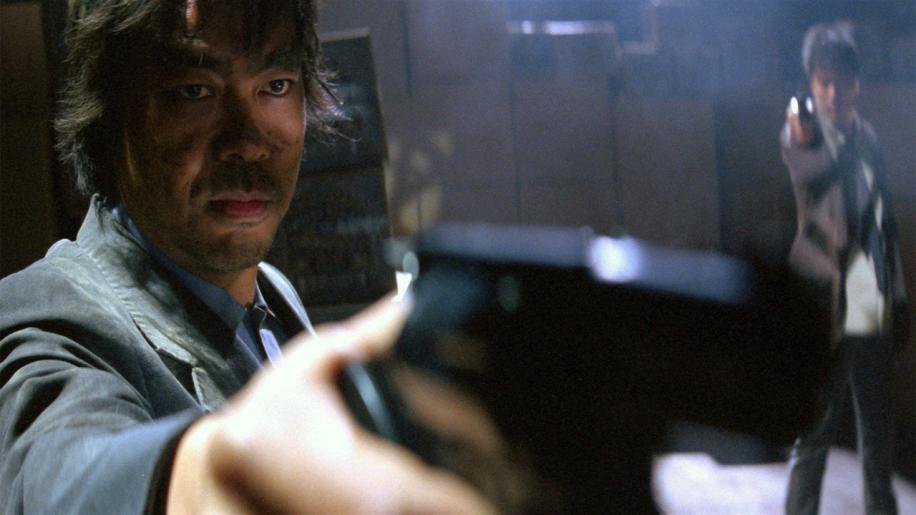 Mad Detective received only a limited theatrical run at selected cinemas in the UK, but this directorial collaboration between cult HK filmmakers Johnnie To and Wai Ka-fai (who first worked together on 1997's Too Many Ways To Be No.1) was the darling of the festival circuit in Europe. Now that the film has become the spearhead of specialist label Eureka's new Blu-ray Masters Of Cinema series, there is hope that it finds more of an audience willing to accept its moments of quirky grandeur, off-beat but clever nuances, intricately-wrought plot and, especially, its engagingly odd-ball lead in Lau Ching-wan's whacked-out Police Insp. Bun, the loon-cake cop of the title, but there are still a few inconsistencies that derail the movie before it arrives at the cult-station that its makers had so obviously strived to reach.

“No-one sees what you see.”

“But I want to help people.”

Whilst Mad Detective is, ostensibly, just another Hong Kong police thriller that enjoys taking the convoluted and intensely stylised route of so many others before it - the plot see-saws with a bipolar narrative, characters do the most inexplicable of things, allegiances are made and broken and trust is never something to be found in copious amounts - it also plays some truly exquisite mind-games of a manner that many may find bewildering and even borderline supernatural. It centres around the completely unorthodox investigation into a missing cop, a series of armed robberies and the pursuit of a highly corrupt and dangerous fellow officer. But what makes the film so special is the madcap relationship between its two male leads - Lau and Andy On - and that trait that is most unique to Asian cinema - the blissful and complete ignorance of conventional, linear narrative.

As bizarre as they come, Insp. Bun is nevertheless responsible for solving many otherwise baffling crimes with the type of marvellous skills that it is plainly obvious the police academy didn't equip him with. Although its genesis is never adequately made clear (which could, of course, be a plus point from certain perspectives), Bun's astounding level of psychic intuition for cracking cases involves methods that Sherlock Holmes would certainly not have indulged in - such as zipping himself into a suitcase in order to be thrown down a flight of stairs or hacking a pig's carcass to pieces, or even burying himself in a fresh grave. But these renegade escapades are designed with the aim of gleaning the last details from a victim's mind about the circumstances of their deaths and point Bun in the direction of those who had a hand in killing them. But, beyond even this “Pushing Daisies”-ish shtick, he can actually “see” people's inner selves, and “hear” the internal voices that drive and coerce them into committing dark deeds. However, despite his obvious and numerous successes - the newspaper clippings of which form the neat opening credit montage - Bun has some serious mental issues of his own to contend with. During his chief's retirement party, amidst the cards and the platitudes, Bun happily slices off his own right ear and proffers it as a leaving gift. As you do, eh? Sometimes a golden handshake just isn't enough, is it? Five years after being booted off the force for this barely explained Van Gogh-inspired stunt, Bun is contacted by his former partner Ho (Andy On) to help with a case that has so far proved mysterious and elusive - that of the afore-mentioned missing cop. Although he hasn't been seen for eighteen months, the cop's gun has been used in a series of vicious armed raids, resulting in four deaths - three security guards and a sales clerk. His partner, who was with him the night he vanished, as the pair were chasing a suspected thief into the woods, has come under the suspicion of Ho, but only a talented screwball like Bun has the ability to actually fathom out what is really going on and find the guilty party.

The film's clever conceit is that Bun's innate sensitivity to the hidden selves of the people around him results in some jarring playfulness as these mental-spectres are revealed. For one thing, it doesn't always follow that a person has only one inner self. The lead suspect, Chi-wai (played with customary intensity by Lam Ka-tung), actually has seven distinct personalities incorporated into his being, all vying for supremacy at any given time. And the way that Johnnie To and Wai Ka-fai handle this chop 'n' change of persona is deliberately employed to fox, bamboozle and pull the rug out from under you. The sheer spontaneity of these inner-self flare-ups is something that can seriously keep you on your toes. Whilst Ho only sees one person, Bun may see all these disparate identities loitering around in a huddle like malevolent shades, a veritable gang stalking the street when the rest of the world sees only one man. Further adding to the confusion is the way that these different pieces of the same person can assume control from moment to moment, shot to shot, or even appear to whisper in the ear of the main “external” persona. This effect is both disorienting and disconcerting. Check out the classic moment when Bun confronts the rogue cop at the urinal and, to incite him, pees all over him. In an utterly crazy image, we get to see the man's dominant female side standing there relieving her/himself at the toilet and the juxtaposition is actually quite alarming. (Gorgeous legs, though!) It is a demented scene, all right.

It is also a terrifically eerie sight to see the crisis of conscience that someone has over whether or not shoot Bun become a virtual tussle between the several diverse personalities that form his single identity, a huge, blurry smudge of hands groping for the weapon to thwart the most reactionary and homicidal identity from going through with it.

However, despite a great and unpredictable performance from Lau Ching-wan, Bun is merely an accumulation of foibles and eccentric ticks, as embarrassing to be around as Inspector Clouseau and as intense and unhinged as the original Martin Riggs - you simply have no idea what he'll do next. Shambling about with no socks on, ill-fitting clothes and a bandage around his head resulting from a beating that removes his new plastic ear, Bun looks just like a prototype Old Boy - part down-and-out, part mental ward escapee. His various antics appear to have no motive, no rhyme or reason and poor Ho is left running about picking up the pieces and trying to extricate his nut-job buddy from potentially life-threatening encounters. Bun's private life is no less complicated. Totally in love with his wife - who no-one else can see, of course - Bun becomes the Charlie Chaplin-esque figure of both buffoonery and tragedy, his own inner turmoil sliding from comical excess and absurdity to pathos and sadness in one fell swoop. As Bun, himself, states when Ho wonders how he sees such things and what it actually feels like, “It isn't easy being me.” Rather like Haley (off-the-radar) Joel Osment's outcast-tyke from The Sixth Sense, Bun's life is a series of visitations, both welcome and unpleasant. His own reputation often brings out the worst in people, and even a trip to the corner-shop can result in ugly confrontations in front of confused and bewildered onlookers who see nothing but a lout picking on some poor innocent. But the relationship he has with his wife, played by Kelly Lin, is wonderfully touching as well as seriously odd, and hats off to the scene when Ho and his own girlfriend are forced to acknowledge and even converse with what, to them, looks like an empty chair at the table for four at Bun's favourite restaurant. You feel their discomfort, but you also feel for Bun and the encounter is slow-baked and understated stand-out in a film full of topsy-turvy moments.

Andy On is good as Ho, yet he, most of all, is the hardest character to fully empathise with - really just a cipher for the audience. Much better value is Lam Ka-tung, who brings a depth to his villainous rozzer that is apparent even without his multiple personalities bumbling about all over the place. He, like Lau as Bun, gets to play-act and to manipulate and, as such, has a more commanding presence. The ladies, however, seem to have nothing to do other than to shout and it is mainly down to Lau's performance that we actually care about them as offshoots from his own dilemma.

“This investigation is driving everyone crazy.”

It's not helping the audience either, mate.

A bizarre, yet beautiful pattern emerges as the film progresses, the bond between Bun and Ho coming to resemble an earlier fateful partnership. Yet it is here where the film sort of comes apart. Just when things appear to have a neat symmetry, events conspire to blast it open again, too many instances having a kind of forced abstraction that may feel emotionally resonant, but really don't make any sense at all and often only serve to undermine the flow of the film and bog things down a bit. Johnnie To has a reputation for making up his films as he goes along, and even if Mad Detective must have had a bit more forethought before the cameras started rolling, this seat-of-the-pants style is still very much in evidence. One encounter by the side of a not-so-shallow grave really doesn't add up at all and it may take a couple of viewings to wade through some of the other clue-gathering sessions that Bun indulges in to see if they actually hold any substantial thematic water. But, by and large, Mad Detective is a compellingly produced and very effective genre-bender that never outstays its welcome and supplies a steady stream of visually arresting vignettes. A tense shoot-out in a hall of mirrors may smack of John Woo - even down to the multiple gun stand-off - but the neat trick here is that half of the people holding guns can only be seen by one person and aren't actually there. Other than this, Mad Detective is actually quite light on action, although the film still feels packed with incident and activity. It also benefits from intriguing camera-work from Cheng Siu-keung, especially in the wooded sequences - the early chase scene features some lovely roving pans through the foliage - and a great, quasi-ambient score that, again, lifts the film out of the norm.

Avid Asian movie aficionados will no doubt be aware that the film is also available on HK region-free DVD and Blu-ray, but the transfer is a doctored version that has been re-colourised, eliminating the film's stylistic blueish, de-saturated sheen. Personally, I enjoyed seeing it again. It doesn't have longevity and there isn't enough bite for it to really make an impact, but there are enough ideas here to satisfy and you simply can't beat the devil-may-care attitude that Johnnie To and Wai Ka-fai have with structure, linear narrative and motivation. Even if they don't all care for it, I'm sure at least one of your inner selves will enjoy Mad Detective. It may play about with multiple personas but it certainly creates a highly individualistic movie.