As a final performance from a consummate artist, this is a worthy tribute. 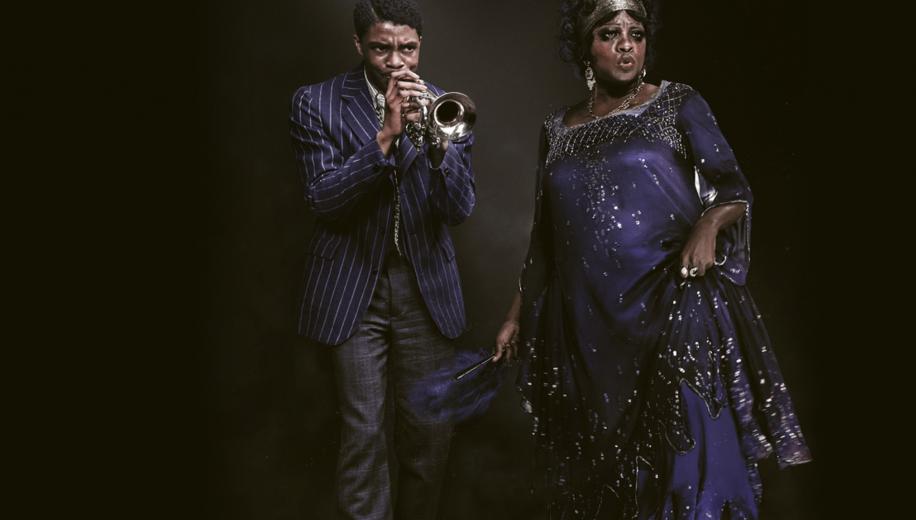 In a year of incalculable loss, the shocking death of Chadwick Boseman still smoulders as a particularly stunning blow.

So much so that in a film based on a play by the legendary August Wilson and dominated by yet another breath-taking Viola Davis performance, it’s almost impossible to stop thinking of Boseman’s tragedy. Particularly as he delivers a performance that’s somehow better than what you hoped his final turn would be, embodying his character and imbuing every on-screen moment with unadulterated star quality and heart-breaking depth.

Wilson's 1982 play Ma Rainey’s Black Bottom was part of the playwright’s Pittsburgh Cycle, and explored the experience of being African American during the 20th century. The play and the film chronicle a single afternoon in 1927, during which Ma Rainey (Davis) – in real life known as the Mother of the Blues – and her band are recording tracks for a new album.

What should in theory be a straightforward afternoon’s work for an iconic singer and her talented musicians devolves into a smorgasbord of power struggles and antagonism between Ma, trumpet player Levee (Boseman), Ma’s white management and the other loyal musicians in the band – Slow Drag (Michael Potts), Toledo (Glynn Turman), and Cutler (Colman Domingo). Though there are moments of joy – big performances from Ma and the gang, laughs and embraces – this is ultimately a tragedy, helmed by two of the year’s greatest performances from Davis and Boseman.

This is ultimately a tragedy, helmed by two of the year’s greatest performances from Davis and Boseman

There are huge arguments and shattering monologues. Levee is a horn player with outsized talent and even larger ambitions. He riffs and steals the stage, wanting his own arrangements and compositions to be fairly heard. The other band members, led by Cutler, just want to keep the peace between hard-headed Levee and temperamental Ma; they’ve seen it all before, and they suspect that their young bandmate is setting himself up for a hard lesson in learning his place.

Boseman never did turn in a performance anything less than world-class, but the fiery, quick as a flash, brash and glinting quality of Levee here has perhaps only been predicted in his performance as James Brown in the criminally underrated Get on Up. Boseman’s Levee is a man with huge ambition and a short fuse; he’s outrageously talented and keen to be recognised. He speaks fast and lashes out faster, and it’s not hard to understand how he manages to seduce so many (in many ways) in the world of the film – Boseman’s expressive face and shimmering eyes command emotion. Levee is frustrated, hurt and quick to rage, and we learn why in a hammer blow that reveals everything about the man he is.

There are more stories of pain and hurt from the other musicians and characters in the film, which is one of the reasons a film adapted from a 1980s play about a 1920s musician seems so timely in 2020. It’s about Black culture and African American culture more specifically, and the film’s focus on struggle, talent, pain and principle make it seem important and worthy, even when the storytelling itself might feel a little understated.

This is in part because the spectre of the original stage play hangs so large over the film, which doesn’t ever really go in for big moments. To its credit, this makes much of the film feel intimate and raw, allowing the two stand-out lead performances to really shine. Director George C Wolfe leans into Ma Rainey’s theatrical roots, knowing that the beauty and essence of a Wilson story is in the language, the moments and the tone. This is a seasoned and celebrated director of theatre, who knows how to extract the magic from performances and display emotion as a special effect.

The film is deeply beautiful, and Wolfe does a great job for the most part at stepping out of the story’s path and letting the poignant narrative take its course. There are a few lulls, where its play-on-screen nature might feel a little too muted, but Davis and Boseman always bring it back immediately, and then some.

In a stunted awards year, it will be truly shocking if Davis isn’t at least nominated for her sweaty, outsized, all-or-nothing performance as Ma. Consistently one of the greatest actors in Hollywood, Davis should really have several Oscars on her mantelpiece by now, and her acting here stands her in good stead to finally add a well-deserved second.

She won’t be winning any awards for her singing though; in a film about an all-conquering blues singer who commands adoration at the peak of her career, it’s an odd choice not to completely dub Davis’s voice here. Davis’s voice is bolstered by the talents of vocalist Maxayn Lewis, but even so it’s sometimes quite hard to reconcile this powerhouse performer with the singing we hear. Davis herself has admitted to not being up to much with her pipes before, and considering the play has been voiced with such success previously, it’s intriguing that Wolfe and others didn’t choose to completely transform Ma’s singing voice.

The way Ma’s nuances are portrayed – by Davis and through Ruben Santiago-Hudson’s adapted screenplay and understated direction by Wolfe – is exquisite. We know she knows how much she’s worth, and knows that as a dark-skinned black woman she’s not getting her dues. She knows her white management are taking her for granted, and she’ll shout and scream and manipulate until she’s treated right. It’s Ma and Levee’s similarities that cause them to butt heads, leading to some of the year’s most captivating scenes.

In a stunted awards year, it will be truly shocking if Davis isn’t at least nominated for her sweaty, outsized, all-or-nothing performance as Ma

As for Boseman, it feels inevitable that this sparkling, heartbreaking performance won’t be recognised with tangible awards. It’s a bit of a departure from his previous roles – in titles like Da 5 Bloods, Marshall or Black Panther, he’s portrayed leaders and heroes to perfection. Here Levee is damaged, troubled, almost more of an anti-hero than a hero.

The film’s story itself is a tragedy, sure. But the real heartbreak comes again and again as you watch Boseman strut his incomparable stuff; the realisation of the performances that should have come that have been lost is crushing. As a final performance from a consummate artist, this is a worthy tribute.

It’s more than just a Boseman masterpiece though. Ma Rainey’s Black Bottom showcases August Wilson’s mastery of language and story, and in Wolfe has found a director willing to sit back and let the story be the driving force. Performances – from leads Davis and Boseman through to the trio of musicians played by Domingo, Turman and Potts – are visceral and note-perfect. A wonderful addition to Netflix’s slate of films, and a welcome break from the wall-to-wall Christmas romcoms dominating the homepage at the moment.