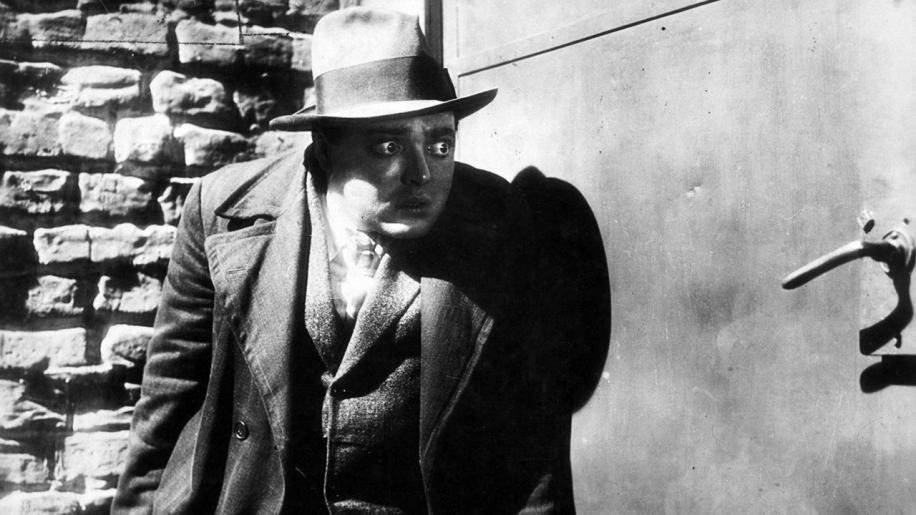 It is hard to imagine what cinema might be without the German expressionist movement of the 1920's. Visionaries such as Lang and Murnau who pushed the boundaries of the format, painted the screen with vivid portraits and drove a story forward with compelling and spellbinding images. They set many 'standards' that are adhered to today, not only of the horror genre but of film itself, such as frame compositions or camera movements and direction. They also knew how to tell a story and were not afraid to shy away from a subject. Take for example a story of a child murderer. Even now, such a story provokes emotion. Add to that a prevailing sense of unease and a killer that expresses no remorse, nor ends on a happy note. Imagine such a film now. Would it even be made?

Well made it was, in 1931, by Fritz Lang, and called simply, M. In a year that brought us such fantastical horror delights such as Frankenstein, Dracula and Dr. Jekyll and Mr. Hyde from Hollywood, Lang, still in Germany, showed us a true horror that could (and had) exist just around the corner, or next door. An all too human horror of a child murderer, preying on the innocent but terrorising a whole city. Lang based his story on that of a real life serial killer, Peter Kuerten from Düsseldorf, tweaking it enough to squeeze out every drop of emotion, every splash of horror.

The film starts innocently enough with children playing to a sombre rhyme (a trick later used by Craven in Nightmare on Elm Street) about a killer's blade. Some short exposition between two mothers expressing concern about the uncaught murderer, we then follow a child as she plays ball while leaving school juxtaposed with this the child's mother going about her chores of cleaning and making dinner, watching the clock. The child meets an unknown man that compliments her and buys her a balloon, something in his manner is not right, we can sense it, the child cannot, the mother watching the time becomes more and more agitated. And then it happens. In a short succession of cuts the mother cries out her child name as the ball rolls unevenly to a stop and the balloon floats away. And that whistling, that incessant whistling - such an odd melancholic tune (actually In the Hall of the Mountain King from the Peer Gynt suite by Edvard Grieg) becoming more and more frantic. There is insanity here.

In these opening scenes Lang grabs the audience and refuses to let them go. Modern audiences will be familiar with the beat of the piece, the pacing and even the camera angles and cuts. But that is because they have been used so many times since. Here we witness them for, near enough, the first time. The uneasy tone is cleverly manipulated and the audience is pulled into the plight of the little girl, we want to warn her, but are as trapped and as helpless as she is. The scene is still powerful even now, imagine how it must have looked ninety years ago!

Following this there is another innovation; narration. Starting off as two officials discussing the mood of the people and the lack of results being obtained by the police, one goes on to talk over scenes as they play out, something that had never been seen before now. The scenes encapsulate a city in the grip of fear - the maniac could be anyone. No child is seen to be safe and anyone seen talking to one is in danger of being accused and many are. Gone is the innocence of helping a child with the time or giving directions or talking. Remind you of modern times much? With civil disruption a daily occurrence the police take it upon themselves to stop and search people and carry out night time raids, checking papers just to gain some kind of insight into the killer. Such tactics disrupt the criminal fraternity, who hold a meeting to discuss how they can carry on their activities under such duress. Again we are treated to another innovation - dual scenes intercut - the criminals and the police, each holding their own meeting, discussing the same thing and coming to much the same conclusion but on opposite sides of the law - Lang intercuts these happenings to tell the story, a much used ploy in modern cinema (I saw it at the end of Gangs of New York which Ireviewed recently) to dramatically advance the story. It worked then and it works now.

But of all the powerful scenes in M the final 'courtroom' must rank as the most, not only in this picture but of all time. Peter Lorre, as the insane murderer, first pleads for his life against a room filled with criminals baying for his head. But instead of a confession of guilt they get a confession of insanity. A compulsion drives him, paranoia and fear, driven to such a point that killing is his only release, his only peace. And such is Lorre's performance that you believe him, casting played a perfect card here, look at his eyes, his gibbering wreck of form as he breaks down, bearing his insanity for all to see, only to have it fall on deaf ears. Only a timely arrival saves him from the wolves, but even then the ending is left ambiguous with a stark warning that YOU should look out for the children.

The whole tone of M is one of oppression and fear. Not only from the images, but with the sound too. Being an early adopter Lang experimented with the sound track, leaving entire scenes completely silent to disorientate and infuriate. There are moments of ambience and stinger effects to make you jump. When added to the innovative camera angles you are left with an incredibly powerful film. Of particular note is some of the camera movements, in the early days of sound, the cameras were so noisy that they 'should' have been housed in sound proof boxes, not so here, Lang has a mobile camera, look for the long zooming shots or the tracking shots. One is quite breathtaking and much copied since - up on high, then coming down to street level, through a crowd then into a building 'through' a window. No CG here, just practical effects and movable sets. I'll wager that had never been done before either!

One thing that did date the film for me, and it is something that I'd previously not seemed to worry about, was the amount of smoking that goes on, characters stub out then light up again with barely taking a breath, entire scenes are smoke filled rooms, obviously to achieve a particular effect (smoke can sometimes be seen being pumped in from the sides) yet for some reason this brought me out of the picture. Odd because it's never done that to me before.

However, M is a certainly a classic film and one that if you haven't seen, you really need to. Rarely has does a film encapsulate such fear and oppression and even rarer to have a central character so openly insane and unflinching in their actions. Peeping Tom might be one, Psycho another, but even in those awesome cases the film ends with a conclusion that the killer has their just desserts, not so with M.

Powerful and genuinely scary. M is all this and more.